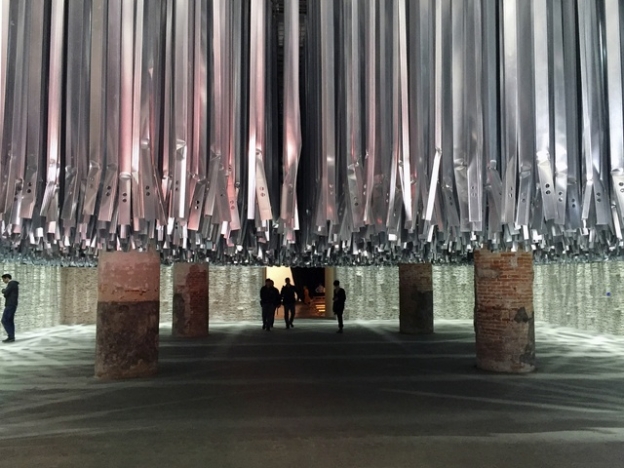 The 2016 Venice Architecture Biennale, curated by Alejandro Aravena, responds to a turbulent time when many countries are suffering economic unrest, an ongoing refugee crisis and political discord. But, as William Feuerman asks, where’s the architecture?

From now through 27 November 2016, architects and enthusiasts from around the globe will descend upon Venice, Italy, for the 15th International Architecture Exhibition organized by La Biennale di Venezia. The Venice Architecture Biennale is like the Olympics for architecture, bringing together a global perspective and dialogue.

It occurs every two years, alternating with the world-renowned International Art Exhibition organized by La Biennale di Venezia, with the objective of celebrating, summarizing and addressing the current state of architecture and the most pressing issues in the profession. The growing success of the Venice Architecture Biennale has inspired a range of spin-offs including the recent Chicago Architecture Biennial.

The centrepiece of the event is a curated exhibition in Venice’s Arsenale, a 13th century former shipyard, showcasing 88 participants from 37 different countries. In addition, there are 62 individually curated national pavilions mostly located around the nearby Giardini, and a range of off-site events and exhibitions. The overall production takes over the entire water city, turning Venice into a hub of cultural production, discussion and discovery.

This year’s curator, Chilean architect Alejandro Aravena, is no stranger to the Venice Biennale. In 2008 his “do tank” Elemental, won the Biennale’s Silver Lion, the second place prize for Promising Young Architects for their reinvention of social housing at Quinta Monroy Housing in Iquique, Chile, and their focus on community engagement.

Only eight years later, Aravena was awarded the 2016 Pritzker Architecture Prize, the industry’s most prestigious prize, along with his appointment as curator of the 2016 Venice Biennale. A big year for Aravena, indeed.

The 15th International Architecture Exhibition theme, “Reporting From the Front”, brings social consciousness in architecture to the forefront, responding to a turbulent time when many countries are suffering economic unrest, an ongoing refugee crisis and political discord.

Aravena wrote when he was nominated as director:

This is what we would like people to come and see at the 15th International Architecture Exhibition: success stories worth being told and exemplary cases worth being shared.

At the main entry to the Arsenale, a large sign painted on the wall explains that “the introductory rooms of the Biennale Architettura 2016 were built with the 100 tons of waste material generated by the dismantling of the previous Biennale”.

The vast reception space of the Arsenale is filled with a curtain of standard metal studs hanging from above. It makes noticeable light patterns on the surfaces below, surrounded by walls made of stacked plasterboard. The plasterboard, piled at a range of depths, produces a changing surface with varied openings.

Arriving at the actual entry to the exhibition, one questions if the next curator will reuse the materials required for Aravena’s exhibition?

What follows is a broad range of dislocated projects from around the globe which as Aravena describes in his curatorial statement,

will widen the range of issues to which architecture is expected to respond, adding explicitly to the cultural and artistic dimensions that already belong to our scope, those that are at the social, political, economic, and environmental end of the spectrum.

But beyond the visual propaganda that seems to be populating the 300 metre-long Arsenale (and beautiful and intelligent propaganda it is) one might question where the architecture resides. It appears that the curator has made an attempt to relinquish architecture (the building form) in order to visualise social and political issues.

Signage reading “Does permanence matter?” or “Is it possible to create a public space within a private commission?” further reduces architecture to slogans and one-liners. 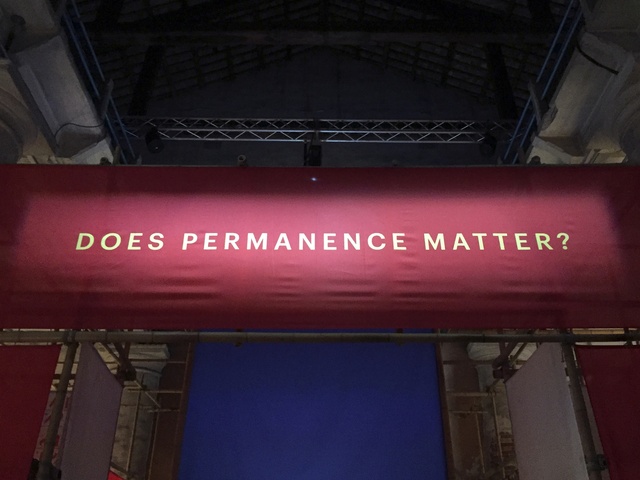 Signage reading “Does permanence matter?” at the entrance to the Arsenale. Image: William Feuerman

But of course within this mix, a range of stand-out projects begin to demonstrate that design can be socially active and play a significant role in the reshaping of the environment. For example, Kunle Adeyemi’s Makoko Floating School, a prototype for a floating community in the rising waters of the Lagos Lagoon in Nigeria, was reconstructed and docked in Venice. The project uses only local materials such as reused plastic barrels for floating. It was the deserving recipient of the Silver Lion award.

Rural Urban Framework, looking at the conflict between the nomadic nature of the past and the sedentary nature of the present, develops housing prototypes for those left out of the urbanisation process in Mongolia.

In the Giardini exhibition, which breathed a bit more life compared to that of the Arsenale, Eyal Weizman’s Forensic Architecture uses architectural design logic working from images, films and satellite footage to trace wrongdoings, such as a drone attack in an Afghan building made legible by video footage from a neighbouring building. 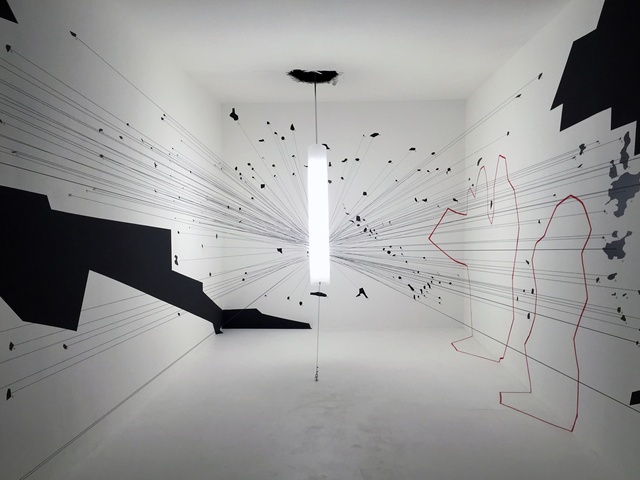 Beyond Aravena’s exhibitions in the Arsenale and Giardini, the individually curated national pavilions offer a wide range of insight into the current state of architecture. The intensity and variation can be overwhelming.

At one end of the spectrum are pavilions that are overloaded with information, such as the deconstructed German Pavilion, which has literally removed four of its walls so that it is always open. Inside, documents that demonstrate how cities and buildings have been transformed with the recent influx of refugees cover the walls from floor to ceiling.

At the other end of the spectrum you have Australia’s “The Pool”, an immersive sensory experience where curators Michelle Tabet, Isabelle Toland and Amelia Holliday have designed a swimming pool surrounded by seating so guests can sit back or even take a dip while listening to interviews about the pool and its influence on Australia’s cultural identity.

Little written or visual information is provided in the pavilion but a take away leaflet expands on the relevance of the swimming pool, addressing issues such as:

a backdrop to the good times, the pool is also a deeply contested space in Australian history, a space that has highlighted racial discrimination and social disadvantage. 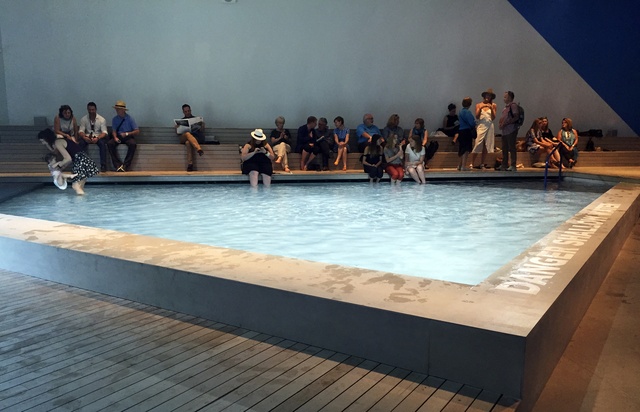 The Pool exhibition at the Australia pavilion. Image: William Feuerman

Other pavilions that should not be missed include the British pavilion and its show Home Economics, exploring new models for domestic life based on hours, days, months, years, and decades. The Russian pavilion exhibits the wild Urban Phenomenon, which examines the Exhibition of Attainments of the National Economy, a 1939 Soviet exhibition and park complex reincarnated as a public multi-format cultural and education space.

what craftsmanship can mean during a period of economic scarcity as, according to the curatorial team, dealing with scarcity demands a high level of precision.

The Spanish Pavilion’s show Unfinished was the winner of the Golden Lion, the top award at the Biennale. Spain presents a survey of photos and drawings of incomplete construction projects prompted by its 2008 economic crisis alongside 55 recent buildings that demonstrate innovative solutions or responses based on economic constraints. 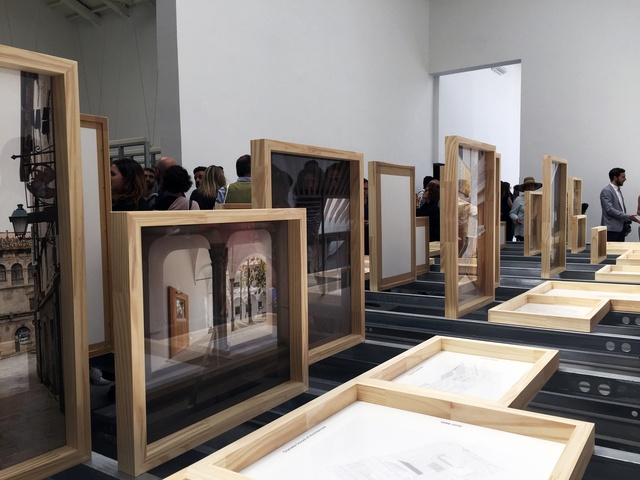 Unfinished exhibition at the Spanish pavilion is the winner of the Golden Lion Award at the 2016 Venice Architecture Biennale.

But one of the most powerful and thoughtful installations came from Ireland with its project titled “Losing myself.” Offering insight into the unimaginable — the experience of dementia — the project works directly with patients suffering from the disease. It explores alternative ways of redrawing a building collectively witnessed by sixteen people throughout one day, based on subjects that:

cannot use memory and projection to see beyond their immediate situation and can no longer synthesise their experiences to create a stable model of their environment.

The results are beautiful representations of a very real and frightening experience but more importantly, returning to Alejandro Aravena’s curatorial statement, this is a project that is an “exemplary case” where architecture made a difference. 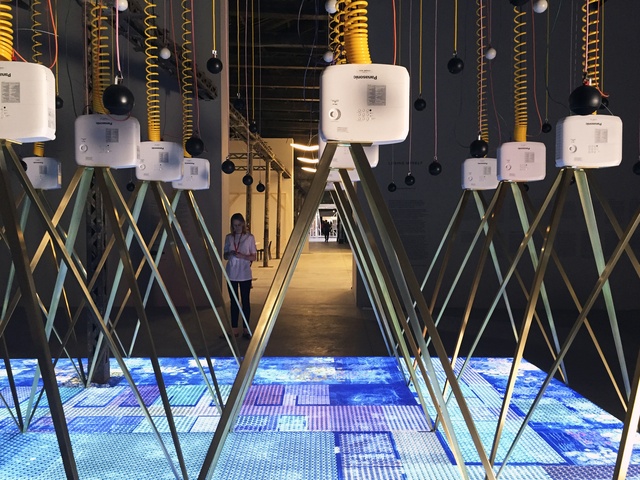 The Irish exhibition, Losing myself, at the 2016 Venice Architecture Biennale. Image: William Feuerman.
Last stop on the Biennale circuit was the off-site Zaha Hadid retrospective at the Fondazione Berengo, an homage to the late architect who died in March at the age of 65. While the exhibition has a strong focus on the late architect’s current projects, (which are really the brainchild of Zaha Hadid Architect’s Director Patrik Schumacher) a large portion of the space displays some of Hadid’s most influential works.

These include her large scale paintings in which architecture grows out of the surface of the canvas, as well as models in paper relief and 3-D printing, line drawings, photographs, and videos.

The work celebrates the role form plays in the production of space. Here, the architect, unlike many witnessed at the Arsenal and Giardini, truly manifests the role of both the public intellectual and a maker of space.

The dichotomy between social activism and Architecture with a capital “A” is blurred here. Certainly refreshing following days of sensory overload. 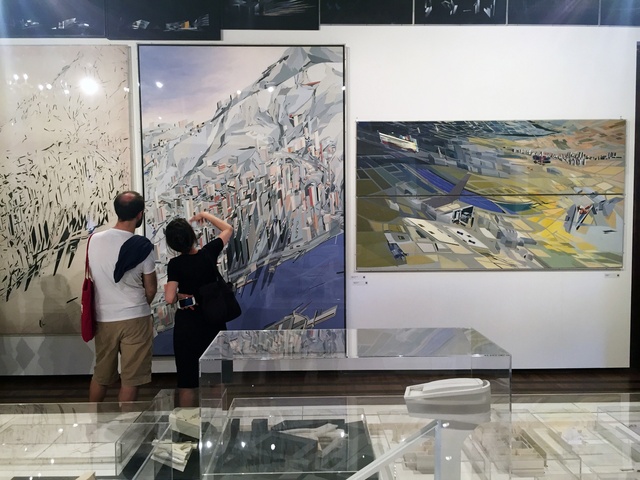 In 2000, I visited the Venice Architecture Biennale for the first time. It was 7th International Architecture Exhibition directed by formalist Massimiliano Fuksas, with a title “Less Aesthetics more Ethics”. It also claimed to abandon previous Biennale structures, “no longer based on architecture as buildings.”

Fast forward 16 years and we seem to be approaching a similar cycle. The big question is: has architecture made a substantial contribution over the past 16 years, or are we just experiencing a case of déjà vu? Is architecture more innovative today?

We cannot deny the amazing array of talent and work presented at the 15th International Architecture Exhibition but did I leave feeling that when it comes to solving the world’s problems “architecture makes the difference”, as Aravena puts it? It would be almost impossible for any exhibition to live up to the expectations of its own publicity.

I leave the Venice Architecture Biennale thinking more about the world in its current state. The problems. The issues impacting our profession. I think that we can all learn a lot from the late, great Dame Zaha Hadid whose seminal work, along with her fearless attitude, challenged the state of architecture through design.

But I also leave inspired (and exhausted) by the amount of work I have been exposed to, and optimistic that we can continue to ask the same questions while challenging them through new paradigms.