Uniting the peripheral and the central at the 2016 Venice Biennale 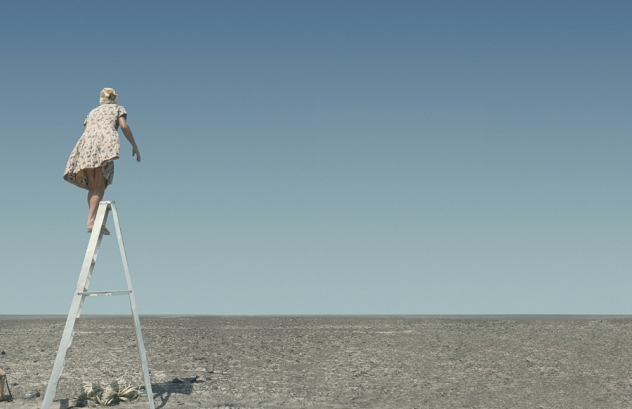 How architects are educated, and the role they play in society, are key questions of today. As an architecture teacher, I ask my students how they see their role; are they makers, choreographers, gardeners, enablers, artists? This year’s Venice Biennale asks, and tries to answer, the same question. There are many different answers.

Firstly, it is a remarkable exhibition. The diversity of architectural production, local and global, expands inside the viewers’ veins and synapses. It stimulates, frustrates and exhausts, and it is addictive. This was my sixth Biennale, and the city—the decaying, dreamy backdrop to the Biennale—is also a sublime, architectural drug. As a reviewer, overdose is inevitable.

My first taste of the Venice Architecture Biennale was in 1985. I was intrigued by “Machines”, an architectural installation by a young energetic tutor from Cranbrook, Daniel Libeskind. For me as a student, it raised multiple questions: Was this architecture? If not, could it become architecture?

In Venice for this year’s Biennale, I was taken back to that first taste and the artist-maker-architect when I discovered, in an atmospheric, crumbling old beer factory, the Nigerian Pavilion. The featured artist/architect, Ola-Dele Kuku, had worked in Milan with Daniel Libeskind in the 80s, and his representational pieces have now travelled much further than Libeskind. Kuku delves into Nigeria’s history with his cultural investigations, continuing to explore structural and political representation and communication with light, braille, and neon. His latest work, “Africa is not a Country”, raises the flawed perception of the vast and remarkable continent by outsiders. Nigeria is a huge country with a vast population of 160 million people (the world’s seventh most populous nation), made up of numerous ethnic and religious groups. Communication and conflict, never far away in the country’s history, are explored through the pavilion’s exquisite work.

the curators seem to be suggesting that the problems in the Nordic countries are more psychological than social.Nearby Nigeria’s pavilion is Portugal’s, inhabiting Álvaro Siza’s 1985 social housing project on Giudecca Island, across the water from the bulk of the Biennale venues. Titled “Neighborhood: Where Alvaro Meets Aldo”, Portugal’s pavilion used Siza’s half-finished building to emphasize their socially invested exhibition. The half-inhabited project appears no longer modernist, white already suffering the ravages of the Venetian climate.

By contrast, the Nordic Pavilion, at the heart of the Giardini Biennale site, provocatively encloses the building’s famous trees with a seventeen-ton ziggurat of Swedish pine. The steep, heavy axe-marked steps of the pyramid reflect the similar concrete steps outside, and give a rare opportunity to commune with the incredibly light, slender concrete beamed roof above. The structure also creates a great theatre for debates and events, to reflect on the position and problems of Nordic architecture. 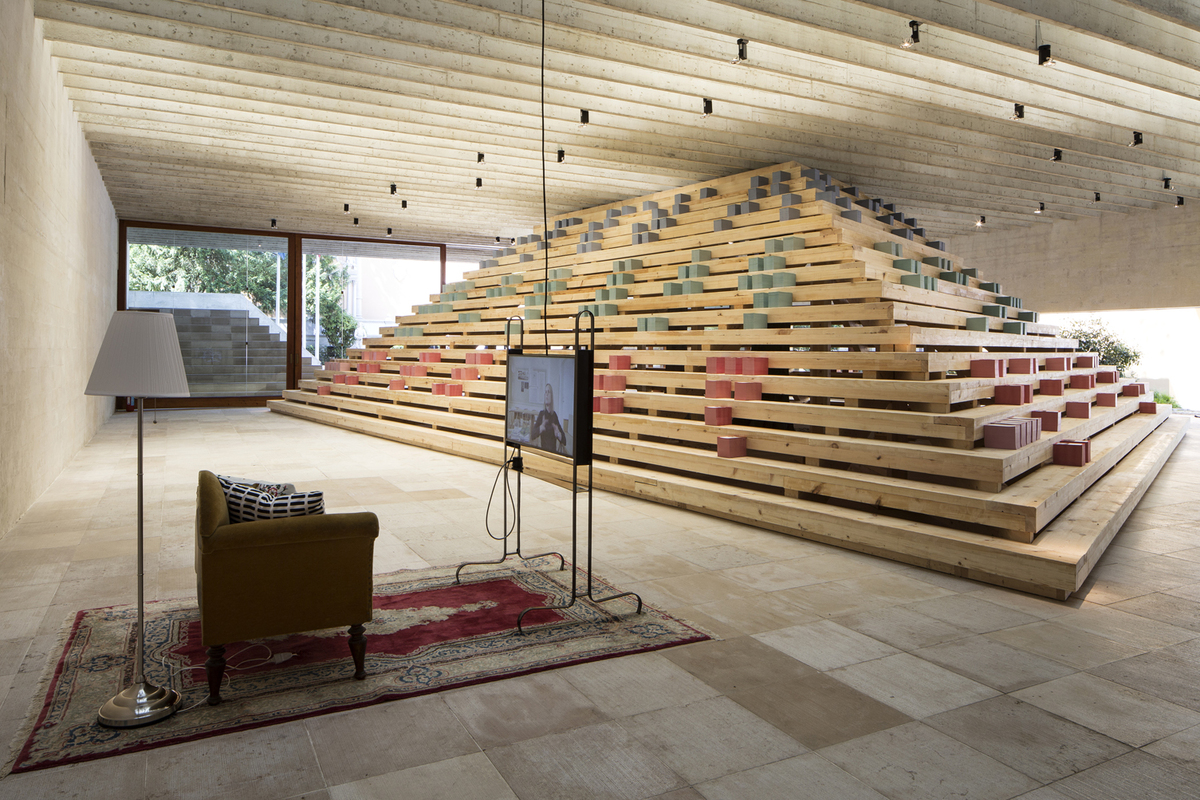 The exhibition title “In Therapy” is carried further into the pavilion with Freudian couches, for anyone to hear views on Nordic architectural issues. In an interesting take, the young non-nordic curators are acting as psycho-therapists suggesting that the problems in the Nordic countries are more psychological than social.

Challenges of social inequality, housing, and urbanisation are found across the world, but perhaps they are nowhere more apparent than in the cities of Brazil. The Curator of the Brazilian Pavilion, Washington Fajardo—architect, planner, and Director of Heritage, Urban Intervention, Architecture and Design for Rio de Janeiro’s mayor—aimed to “present the stories of people who struggle for and effect change in the face of institutional passivity in the nation’s big cities.” These are often platitudes, but there is a depth and reality to the Brazilian exhibition that may not be apparent at first. Entitled “Juntos [Together]”, the pavilion exhibits projects dealing with serious issues, one example being Programme Vivenda: a government supported program in São Paulo that brought about small changes through a DIY support program for favelas with architect playing the role of enabler. 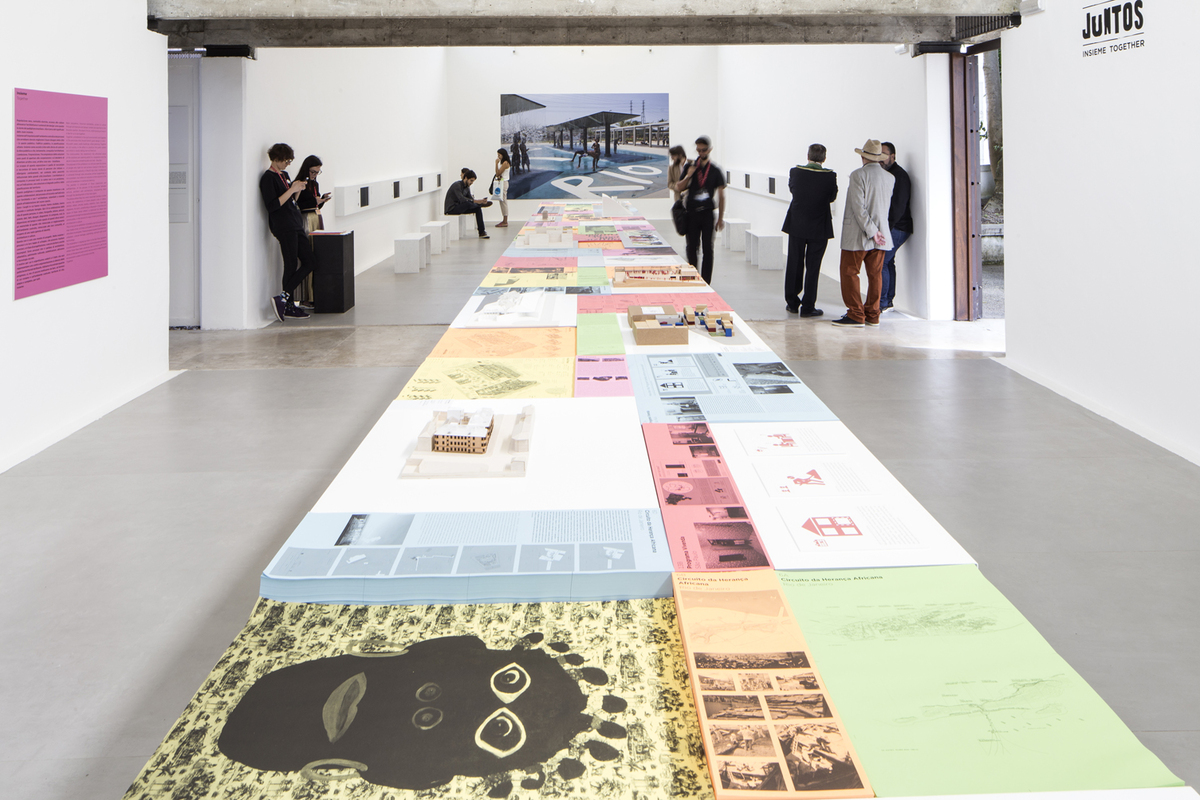 In China, social inequality and housing disparities may not be so apparent as in Brazil, but the rate of urbanization and change has been both remarkable and frightening, with difficult consequences becoming more apparent.To visit is to enter a strange world of Super-Realist IKEA.

China’s Pavilion reacts to this, responding to the Chinese government’s edict to move away from designs that are either non-traditional or by international architects. It looks back through a number of exhibits to a slower moving China, with materials and examples from small scale, historic interventions that reflect the country’s Taoist traditions.

Curator Liang Jingyu tackles the issue of modernization’s “ignored front”, namely the “dignity, welfare and equality” of all citizens. Under the theme “Daily Design, Daily Tao”, the Chinese Pavilion includes 10 projects that reproduce traditional values and ways of life that appear lost to China’s “great leap forward and over”. Speaking at the pavilion’s opening, Chinese Vice Minister of Culture Yang Zhijin stated, “the exhibition is about things and designs that satisfy people not by introducing a new future to replace the past, but by polishing the past and integrating it into daily lives.” With the simple, low, traditional seats around each project, in the large dark Arsenale warehouses with soft classical music playing, it feels atmospheric and sensitive to the individual and the environment, while also seeming to deny the reality of modern Chinese city life and the country’s multi-ethnic patchwork. 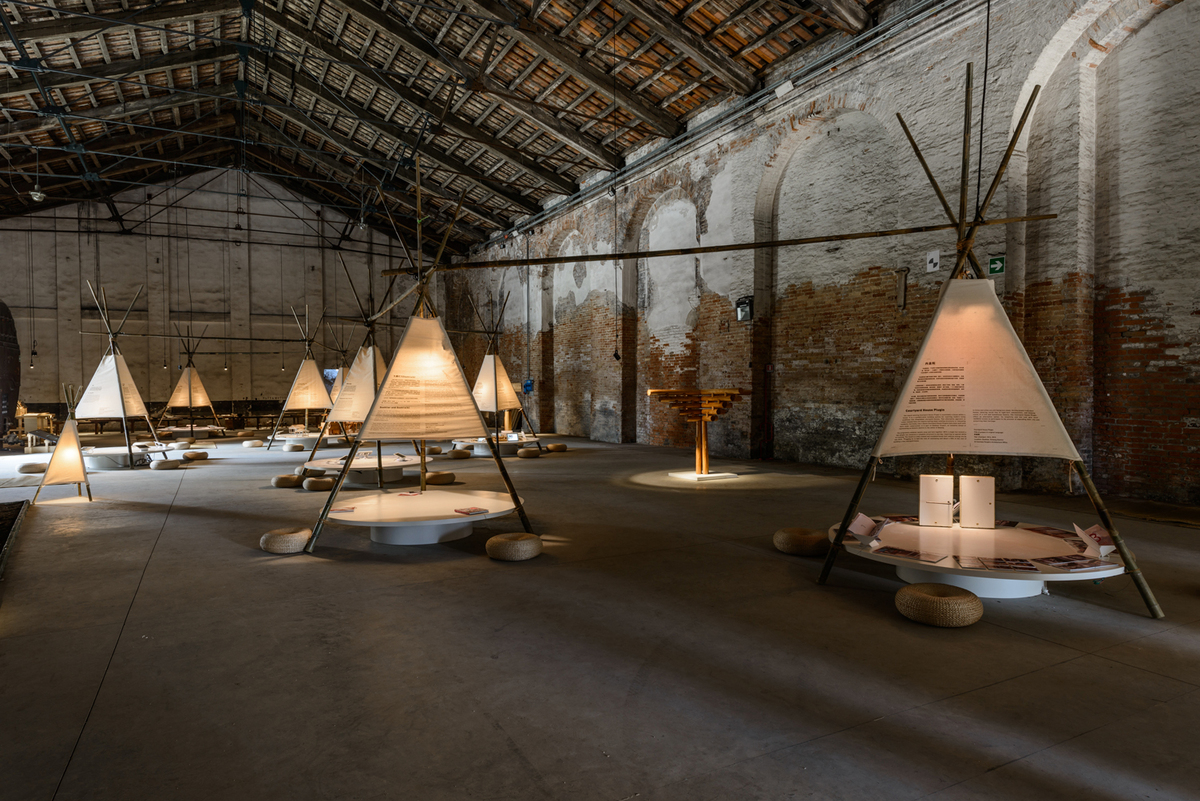 The British Pavilion is slick and sophisticated, with finely crafted elements and objects curated by young architect-trained thinkers. To visit is to enter a strange world of Super-Realist IKEA. It is a serious work, no Monty Python humor here, unlike FAT’s installation for the 2014 Biennale. It takes the future question, and current problematics, of domestic life through five time frames, each designed by a different designers as a separate installation. On the scale of minutes to years, the pavilion considers shared living, “shell” housing, and re-purposed spaces. The traditional role of the architect becomes critical imagineer.

It’s a projection of future living by 60-plus UK-based designers and makers, asking some fundamental questions about the way we live: permanent or temporary, shared or individual, it appears surprisingly modern, and global.

In the Russian Pavilion there is a very different story: the re-imagining of a politically charged and architecturally remarkable exhibition site in Moscow, the VDNKh (Exhibition of the Achievements of the National Economy). Championed by Stalin to promote communism and the Soviet regime, the VDMKh dates back to the late 1930s. It had been launched into the free market in 2000, but now has been taken back into city control and is a place of “contemporary transformation”.

It is often at the periphery, out of the main Biennale sites, that the center can be seen differently. At that center of the Biennale venues is the Zaha Hadid Architects exhibition, showing early paintings to advanced research into digital form, as well as project models. The first female star (and her office are seen as the traditional architects at the center of architectural activity and debate but she started at the periphery, questioned as an architect seen as an artist, with her paintings and drawings described by clients and critics as unbuildable. 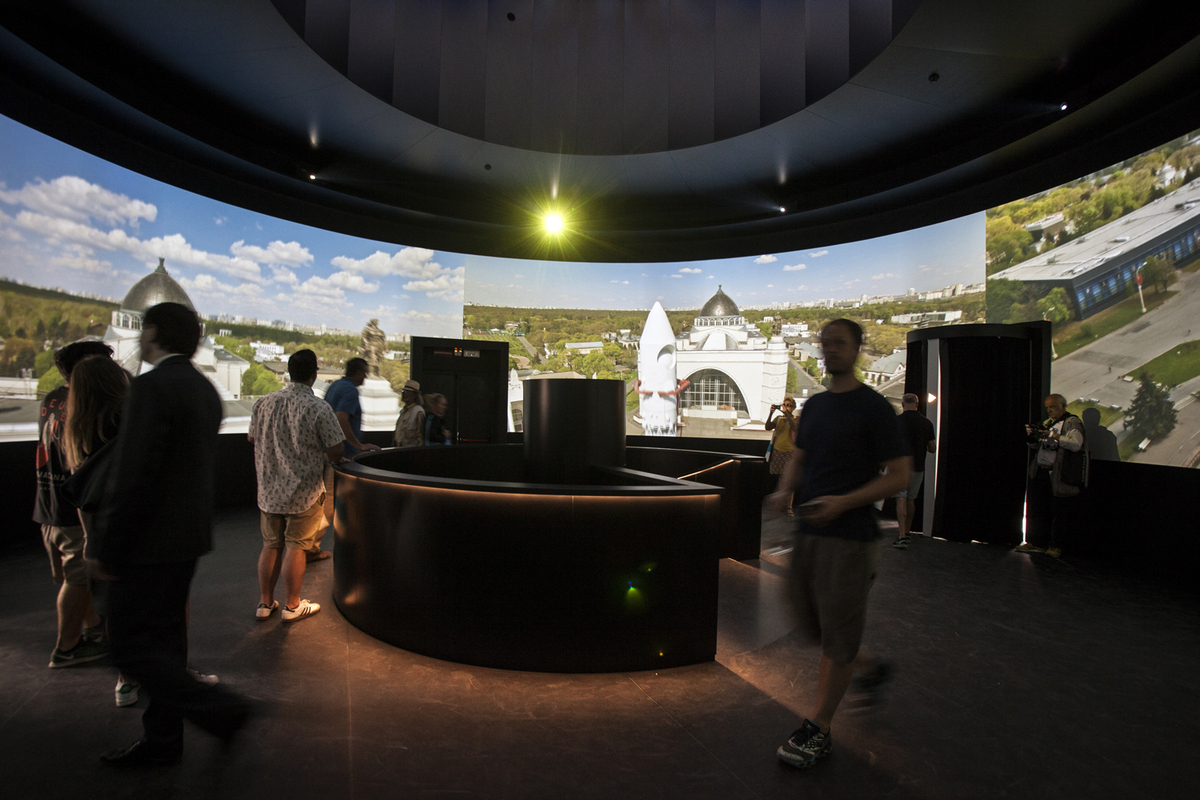 As I was leaving the Biennale’s central venues, I stood on an arrow sticker with “Antarctic Pavilion” written on it: an extreme ecological periphery. While I certainly desired to visit, there was no time — it will have to be part of the next dose of Biennale,with my students, drawing and reviewing the role of the architect in October.