The 10 Best National Pavilions at the Venice Architecture Biennale 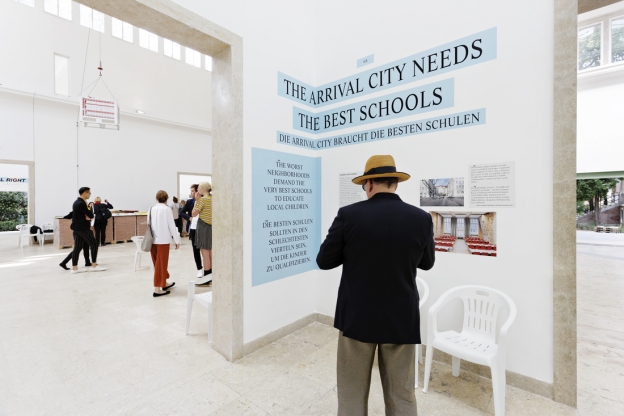 Curated by a team from the Deutsches Architekturmuseum, the German pavilion makes a concerted statement in favor of welcoming immigrants and refugees—Syrian, Turkish, and otherwise—to the country, with an exhibition that documents how cities like Berlin, Offenbach am Main, and Frankfurt have adapted architecturally and culturally to the recent influx of migrants. Photographs of newly arrived families line the pavilion walls, with narratives about their origins, housing, and lives in Germany displayed alongside maps and charts of statistical data.

To emphasize the country’s openness, the curators decided to create four doorless openings in the pavilion’s walls, such that the space remains perpetually accessible at all hours. While landmark designation laws prohibit the alteration or destruction of all national pavilion structures inside the Giardini, the curators were able to negotiate with Venetian preservation authorities to receive approval for the gesture; the walls’ bricks are stacked to form a desk in the pavilion’s central chamber, and will be used to fill the walls back up when this Biennale concludes in November.

The exhibition design, conceived by Berlin-based architecture studio Something Fantastic, borrows directly from immigrant-developed infrastructure—like grocery stores—in the cities examined by the pavilion. The designers celebrate the simplicity and efficacy of such low-budget design, and also underscore the fact that this Biennale is more an exhibition of architectural rhetoric than architecture as such. 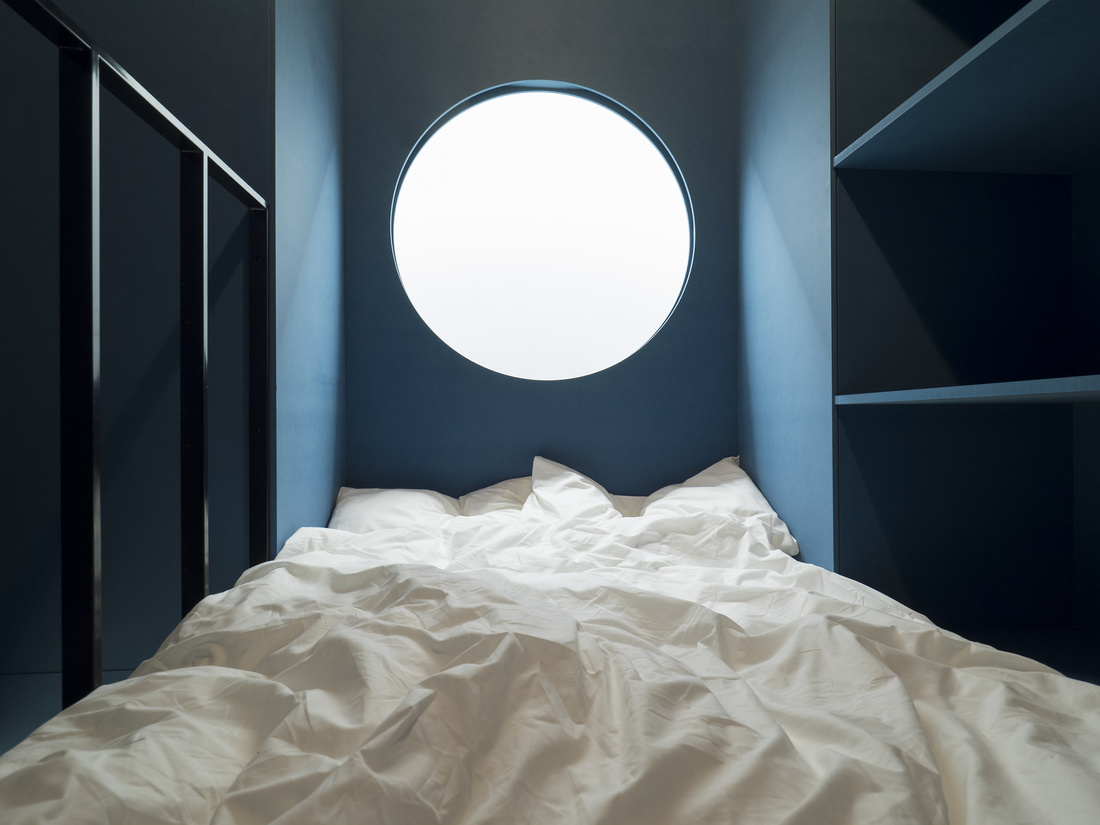 The most conceptually ambitious national pavilion at this year’s Biennale analyzes the spatial implications of real estate speculation for housing design (and the basic human need for the comforts of home). Co-curated by writer and researcher Shumi Bose, architect and writer Jack Self, and urbanist Finn Williams, «Home Economics» displays hypothetical interior arrangements arrayed across five dedicated rooms that each model a scenario of domestic life fit for a certain timeframe: hours, days, months, years, and decades.

At times, the display is almost too cynical: a passage from one room to another reads «Home is where the WiFi is,» and the exhibition’s effort to engage the ways that increased real estate values mean smaller, more expensive living spaces in major cities sometimes approaches caricature. (The «days» room contains an inflatable, rolling ball, designed by art collective åyr, ostensibly home to someone who is «constantly on the move.»)

But its inherent pessimism is also one of the few aberrations from a pervasive optimistic bent at this year’s Biennale, one that often translates as naïveté. With so many pavilions eager to display the temporary ‘solutions’ offered by architecture to the socioeconomic and quality-of-life problems faced on the home front, it’s both necessary and somewhat sobering to come across a pavilion willing to acknowledge that architecture is sometimes just as well the root of the problem. 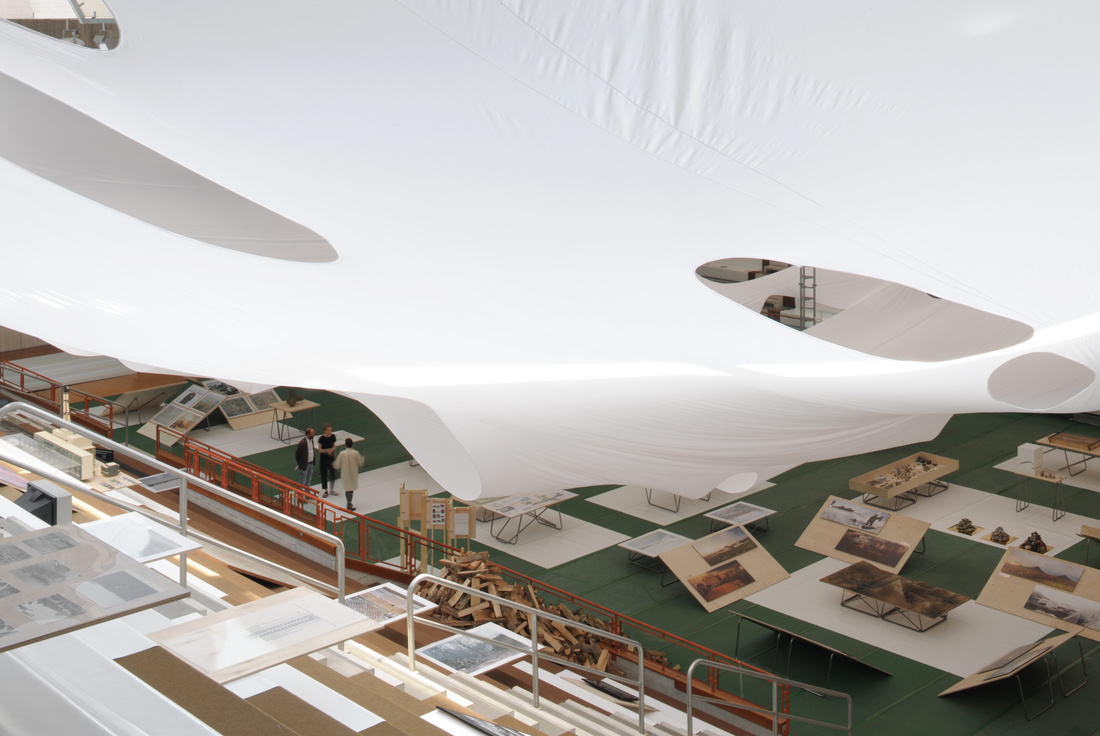 The Palasport, a rectilinear concrete sports hall tucked away on a small alley between the Arsenale and the Giardini, is a fitting and evocative location for the first Biennale display that represents a collaborative effort by all three Baltic nations: Latvia, Lithuania, and Estonia. Inside, tables display photographs of mostly concrete architecture and infrastructure from all three nations, highlighting their shared modernist patrimony and methods for reviving or redefining Soviet-era Brutalist buildings.

The Golden Lion went to an exhibition about the professional crisis of Spanish architecture in the post-2008 era, when the country’s real estate industry could no longer afford to keep many of its architects employed. Mounted onto barebones steel frame structures, photographs of post-crisis Spain document how formerly abandoned buildings and incomplete architectural projects have been reclaimed through inventive, low-cost interventions conceived by destitute designers in desperate times.

Albania: «I Have Left You the Mountain» 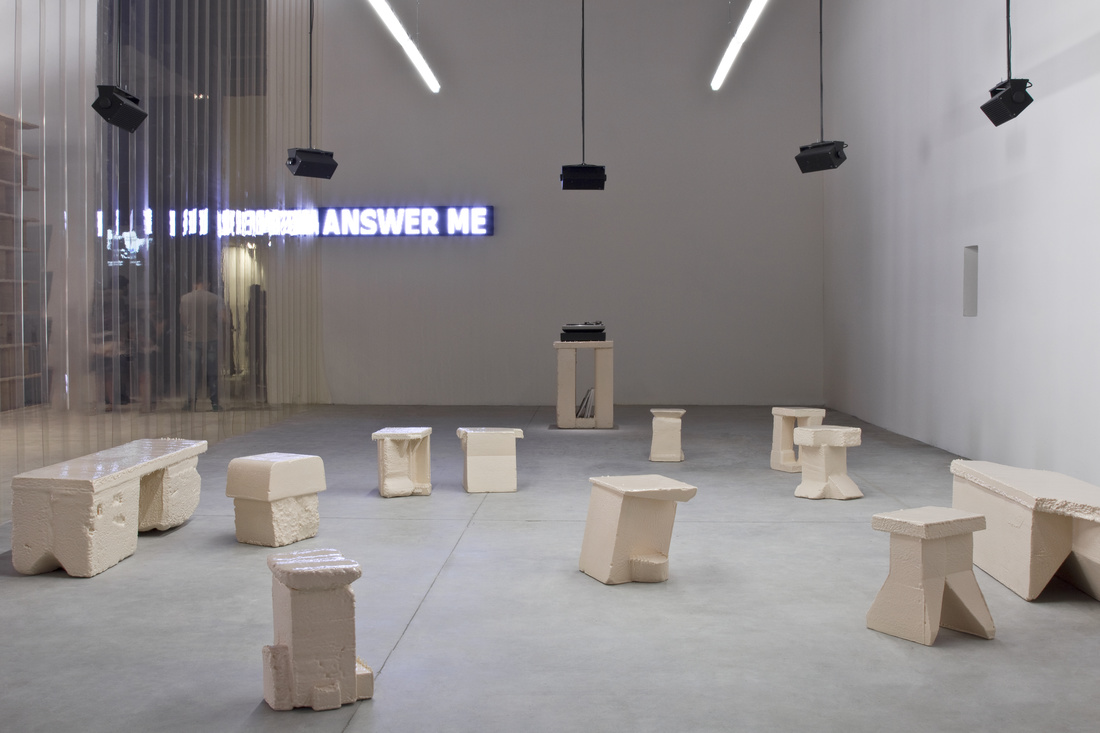 The Albanian pavilion is refreshingly devoid of floor plans, scale models, and technical documents. In fact, the entire space is quite nearly empty, save for a few rubber stools (custom designs by British designer Max Lamb for the pavilion), a turntable, speakers, and a sign that announces the current iso-polyphonic track that’s playing. Whereas most pavilions in the Arsenale require viewers to digest wall text and infographics, «I Have Left You the Mountain» invites visitors to sit, listen, and contemplate the experiences of transient laborers.

For the pavilion curators Leah Whitman-Salkin, Simon Battisti, and graphic design collective Åbäke created an album of music from the country’s south. The curatorial trio commissioned 10 texts from noted writers, artists, and thinkers on architecture and displacement and had their musings translated into Albanian, after which the texts were interpreted as mournful melodies by iso-polyphonic village singers. The resulting exhibition viscerally conveys the tragedy of itinerant, migratory life, a constant reality in Albania—in 2013, 45 percent of the country’s citizens lived abroad, many as guest workers in Italy. In line with the exhibition, the curators opted out of the standard champagne-fueled opening reception and hosted a record release party at a nearby bookstore instead. 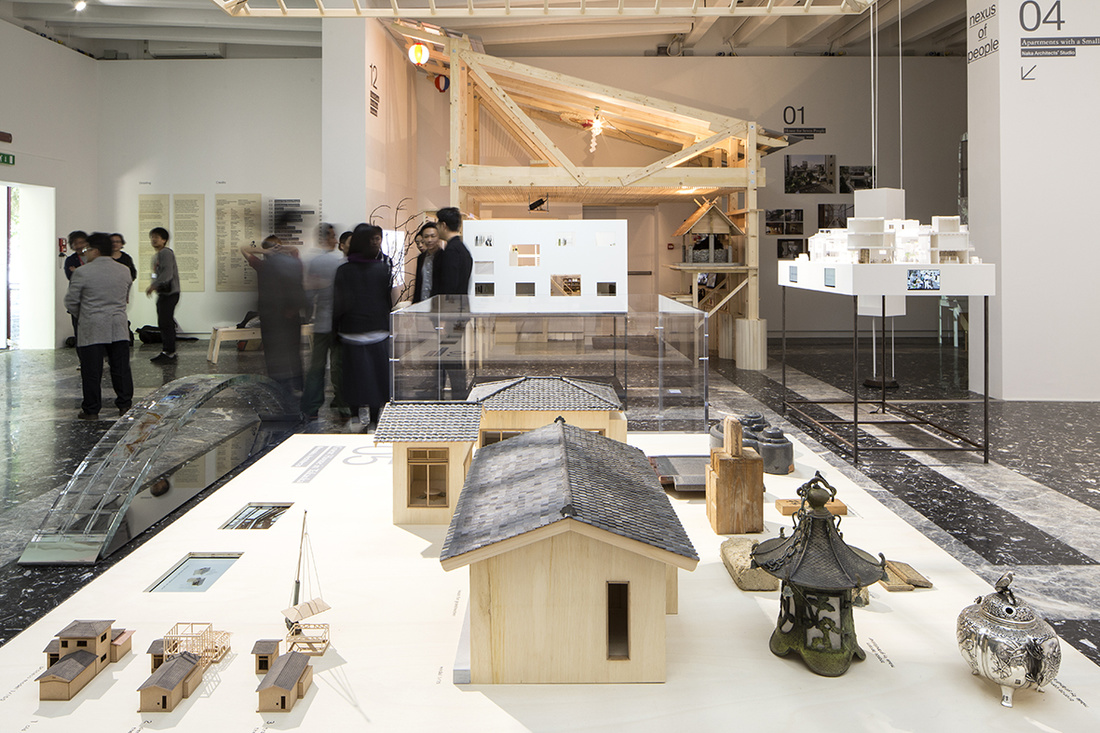 The Japanese pavilion addresses the future of architecture in Japan, reflecting on the nation in a moment of low growth, high unemployment (particularly among young people), and the ubiquity of the internet, which has fostered communities of sharing. Young firms—most of them nearly unknown outside the country, like mnm and Shingo Masuda+Katsuhisa Otsubo Architects—exhibit designs for site-specific residences produced over the past seven years, proposing resolutions to the classic divide between private property and the fundamentally civic presence of all architecture. 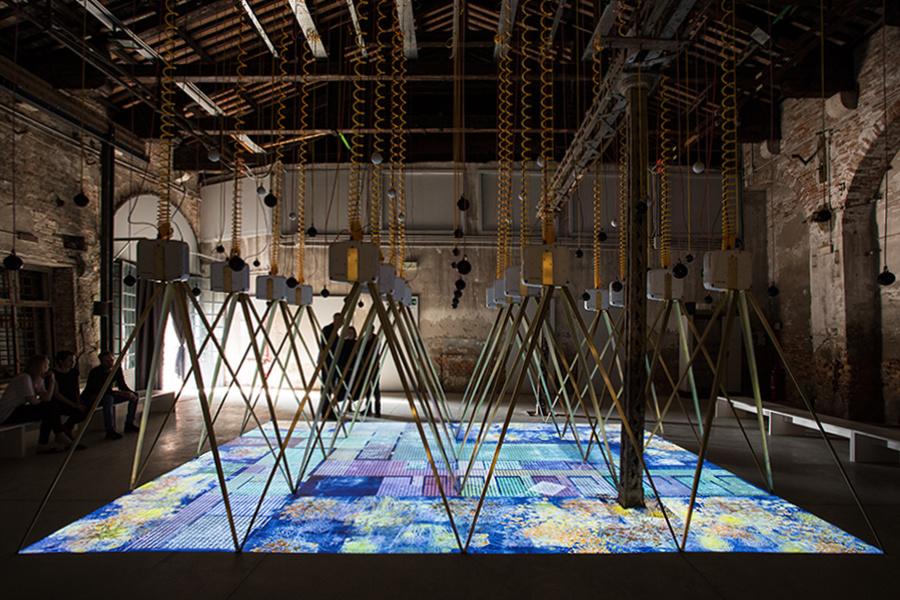 Cognitive diseases often alter spatial experience, but the effects are rarely discussed in architectural terms. This year’s Irish pavilion, curated and designed by architects Niall McLaughlin and Yeoryia Manolopoulou, takes the Alzheimer Society of Ireland’s Orchard Day and Respite Centre in Dublin as its point of origin. Sound installations on the ceiling convey snippets of conversation that abruptly start and stop, and video projections on the floor flash from one image to the next in an immersive effort to recreate the experiences of the Centre’s patients and caregivers. 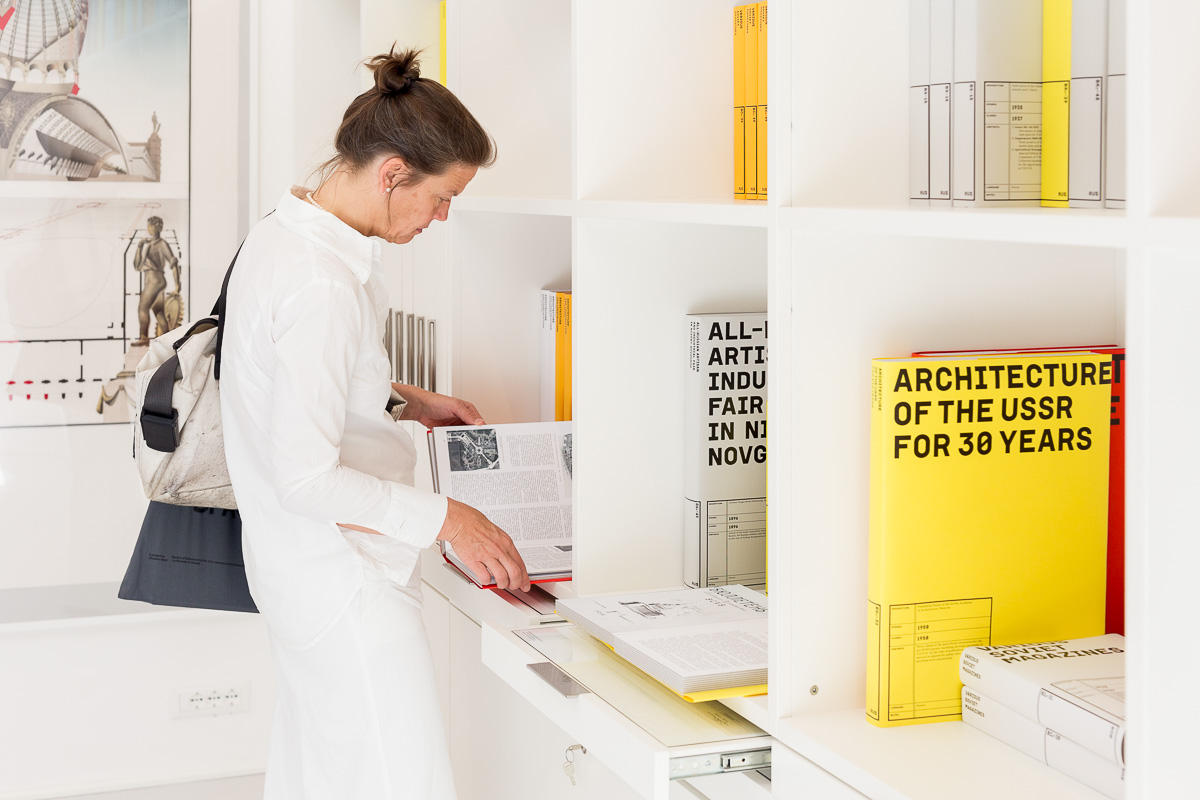 This year’s Russian pavilion wasn’t quite on-brand with the progressive political agenda that charged Aravena’s mandate to pavilion curators—the two-story exhibition narrates the history and future of the V.D.N.H., a sprawling fairground built by Joseph Stalin on the outskirts of Moscow (the acronym stands for Exhibition of Achievements of National Economy). The display does, however, make a compelling case for reusing existing architecture and infrastructure—even buildings produced in politically compromised circumstances—and its ground-floor display of plaster cast façade sculptures replicated from the fairground’s buildings at full scale is surprisingly beautiful. 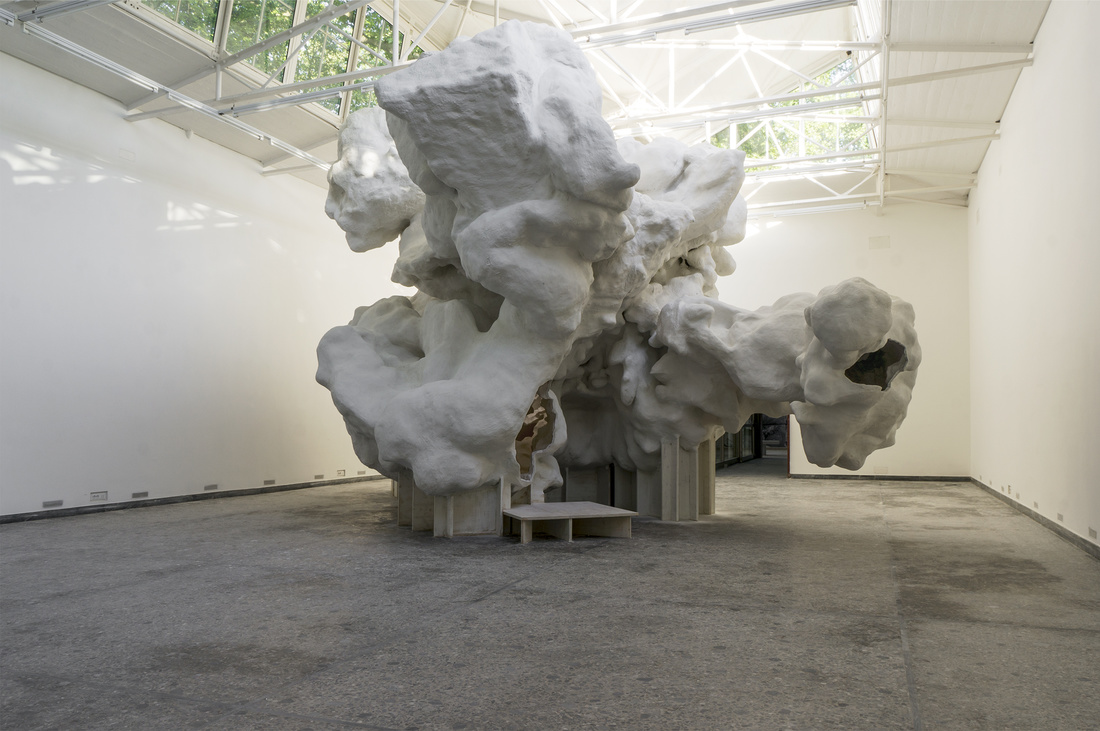 Swiss architect Christian Kerez built one of the few expressive, geometric forms at the Biennale—a white cloud made of sprayed fibre cement that invites visitors to crawl into the space’s interior cavity. Surrounded by pavilions that interpret Aravena’s theme literally, the Swiss exhibition left some onlookers confused. Many wondered during the preview, «How does its formalism fit into the prevailing emphasis on social conscientiousness?»

And yet, the Swiss display was the best example among the national pavilions of the small-scale, hand-built architecture that Aravena’s central exhibition puts forth as an alternative to the deleterious effects of starchitecture. (It’s also worth noting that Kerez’s work in Brazilian favelas is featured in the Central Pavilion, so displaying such projects in the Swiss pavilion would merely be repetitive.) The emphasis on craft here is palpable, and the result is a visually stunning display built with an impressive minimum of material means. 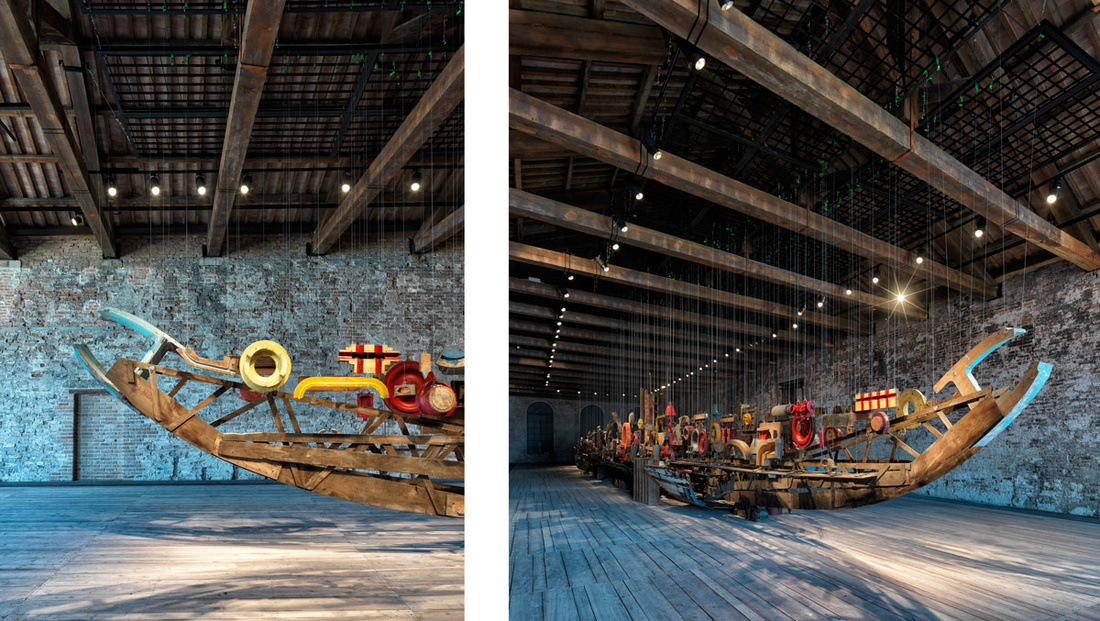 The Republic of Venice and the Ottoman Empire were military rivals and commercial trading partners for nearly half a millennium, and the Turkish pavilion references their affinities by transporting relics from an erstwhile Istanbul dockyard to the Biennale’s Arsenale. Objects and detritus found in the former ship-building neighborhood have been fashioned into a boat-shaped assemblage on view in Venice, dubbed a bastarda by curators Feride Cicekoglu, Mehmet Kutukcuoglu, and Ertug Ucar. The pavilion’s sculptural installation appears especially impressive amid the morass of posters and display boards at nearby pavilions, and closer inspection of each individual element reveals a pan-Mediterranean heritage equally at home in Italy and Turkey.