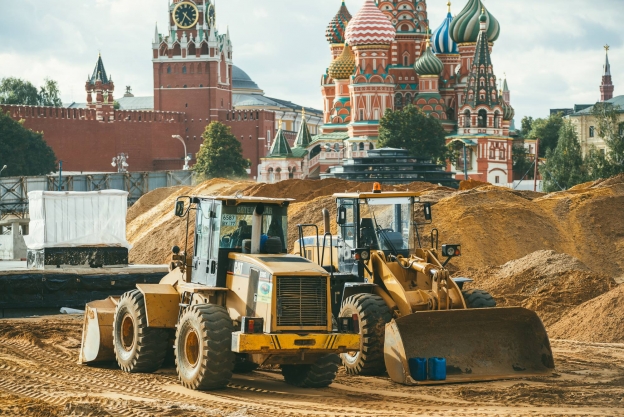 Architects Liz Diller and Charles Renfro talk about their latest high-profile commission, a weather-bending (and politically charged) city park in the heart of the Russian capital.

At their hangar-like office in Manhattan, the architects Liz Diller and Charles Renfro click through a slideshow displaying enormous, fantastically shaped structures embedded into a hilly landscape. The renderings depict 32-acre Zaryadye Park in Moscow, designed by Diller Scofidio + Renfro (DS+R), the studio they lead with partner Ricardo Scofidio. The celebrated architects enthusiastically describe the various cultural and civic amenities now under construction, which will include a large glass concert hall for the city’s philharmonic, an open-air museum that will feature multimedia displays of Moscow’s history, and a grassy outdoor amphitheater capable of seating 5,000 people.

Zaryadye is the first major new park built in Moscow in the past 50 years; with a price tag reported to land between $390 million and $480 million, it will be one of the most expensive city parks in the world. It’s also a pet project of Russia’s president, Vladimir Putin. When his name is mentioned, it’s as though a chilly Moscow breeze blows across the large wood conference table. Asked about rumors that the site is under consideration as a location for Putin to announce his 2018 presidential campaign this coming September, when the park is slated to be finished, Renfro says, «We have heard that.... Yep.»

The future park’s location along the Moskva River, steps from the Kremlin, will make a fitting stage for Putin to unveil his latest ambitions. Indeed, the park has been draped in Putin propaganda since its inception. The site was once home to the vast Rossiya Hotel, a Soviet-era behemoth once billed as the largest hotel in the world. It was demolished in 2006. Press accounts credit Putin with nixing a proposal for an enormous commercial development in the Zaryadye district, which was slated to be designed by the British architect Norman Foster, and instead deciding to build a park during a tour of the site in 2012 with Moscow’s mayor, Sergey Sobyanin.