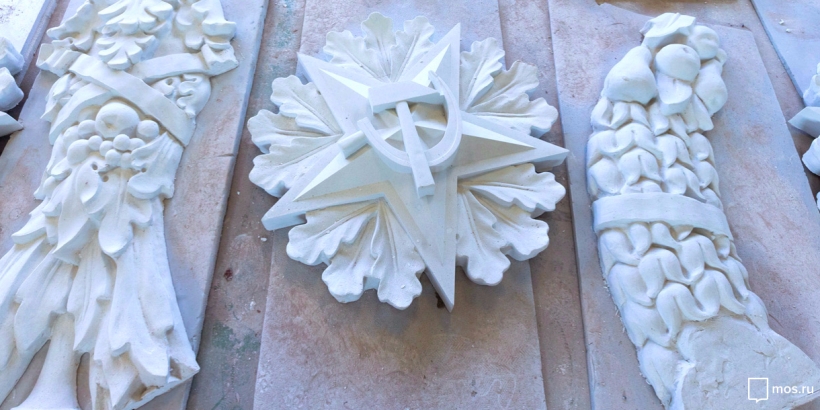 Specialists have recreated 28 plaster pieces that adorned the building during the Soviet period and have also restored the bas-relief with five-metre high figures.

Restoration specialists have cast the decorative mouldings that formerly adorned Pavilion No. 32 Cosmos at VDNKh. The recreated objects include 28 plaster elements representing the symbols of various branches of Soviet industry, floral decoration, a six-metre high Soviet emblem, and two three-metre high Orders of the Red Banner.

«All components of the frieze were cast from plaster, based on historic photographs and drawings from the 1950s. [heritage protection oversight body] Mosgornaslediye oversaw the work of each part,» the VDNKh press service said.

Head of Moscow’s Cultural Heritage Department Alexei Yemelyanov said that the pavilion would be restored back to its original appearance from 1954, the year VDNKh opened following the end of the 1941-1945 Great Patriotic War.

«What is interesting is that this pompous frieze was dismantled during the Soviet period and onlynow will it be restored and put back to its original place,» Yemelyanov said.

Work is also near completion on restoring the pavilion’s original bas-reliefs. They display six five-metre high sculptural compositions representing pioneers, workers, collective farm workers, and builders. The restoration work began at the start of May. The sculptural compositions have had their ears of wheat and other lost bits restored and the figures have been cleaned up and covered with a special weather-resistant substance.

In 2018, once the restoration work is completed, the Cosmonautics and Aviation Centre will open at the Cosmos Pavilion. It will display a full-scale model of the orbital space station Mir, the Bor-4 Soviet unmanned orbiting rocket-glider, liquid-fuel rocket engines, a GLONASS-K satellite, the open satellite platform Express-1000 and many other pieces of equipment.