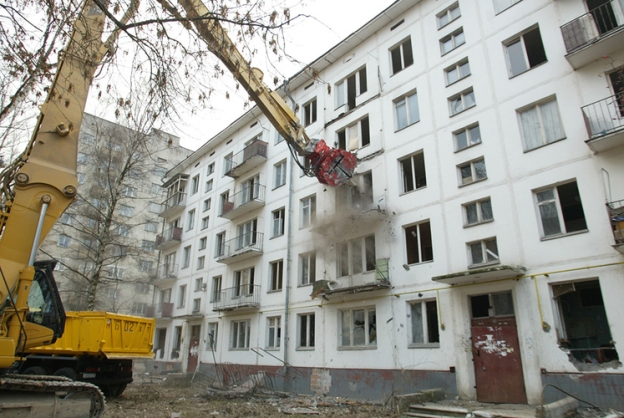 The Mayor of Moscow spoke about the relocation programme, efforts to modernise the healthcare system and new technologies for the city and its residents.

Five-story buildings will give way to improved residential areas, and the number of trees and shrubs will not decrease, Sergei Sobyanin told Rossiya 24 TV channel.

«The number of trees and shrubs will not decrease after new housing is completed but will, most likely, go up because the area under construction will not exceed the current area. You see, high risers instead of sprawling buildings will be built,» he noted.

The city will use better improvement standards, set up new public gardens and public parks, as well as playgrounds for children.

High-quality, modern and convenient residential buildings will be equipped with lifts, so that people living on the upper floors will be able to quickly reach their flats and descend to the ground floor. The lifts will be located near the entrances of the buildings, to make it easier for people with disabilities and parents with little children in prams. The flats will also be larger, featuring spacious corridors, bathrooms and kitchens.

People will not be required to pay any extra for the new flats. «We provide high-quality housing free of charge,» Mr Sobyanin said. «The city will build this housing all by itself and provide people with new flats that will, as a rule, cost 20-30 percent more than their old ones, in terms of their market value,» he added.

At the same time, it will be impossible to implement this huge programme with budgetary funding alone. The city will launch the programme and will construct the first buildings where residents from nearby old five-story buildings will relocate. Later, the city will retain some flats in newly-built residential buildings; these flats will be later sold to all prospective homeowners for the going rate, and this will make it possible to compensate for part of our expenses, Mr Sobyanin noted.

The new residential areas will feature single-level, underground and elevated parking space, numerous roads and streets, new schools, kindergartens and outpatient clinics. «Most likely the city will finance construction of social and cultural facilities, additional roads and streets, as well as reconstruction and improvement projects, but we are already addressing this task,» Mr Sobyanin said.

The draft relocation programme includes about 4,500 buildings whose residents will have the final say. They should okay or reject the relocation programme until 15 June by voting on the Active Citizen website, at My Documents integrated government services centres or at general meetings of homeowners. «While compiling this programme, we are, first of all, guided by the technical state of buildings; and, secondly, by the wishes of the residents themselves. If they don’t want their house to be demolished, and if they don’t want to relocate to a new building, then, of course, we will not do this. In the long run, this is their decision, and we are acting that way because they have asked us, and not because we want to do this,» Mr Sobyanin added.