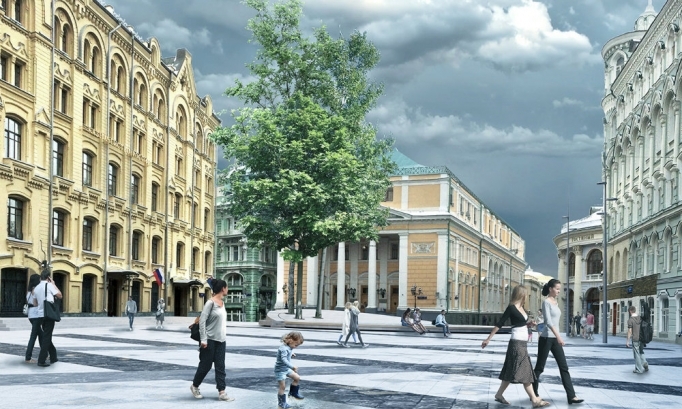 Preliminary works have started in the run-up to a major construction project under the My Street programme on the Rybny and Bogoyavlensky streets and also on Birzhevaya Square.

On 19 June, the city began preparations for building an interconnected pedestrian area that will connect the Kremlin and Red Square with Zaryadye Park. This promenade, due to include the Rybny and Bogoyavlensky streets and also Birzhevaya Square, will become the main walking route towards the park from Ploshchad Revolyutsii metro station.

The route is to link Zaryadye Park with Nikolskaya Street (between Red Square and Lubyanskaya Square) that has been closed off to traffic since 2013.

Construction workers have now started renovating and relaying utility facilities on Birzhevaya Square and the Rybny and Bogoyavlensky streets. These preliminary works precede a large-scale construction project under the My Street programme.

Construction sites will be fenced off, with pedestrians having to use temporary wooden tunnels with ramps and exits. Utility companies will replace the local gas and water pipelines, and will dig underground cable ditches, so that the overhead cables will no longer be visible.

After this, the main work will begin. Curbstones will be installed; streets will be paved with large granite blocks, new street benches and energy-saving lamps will be installed. During the final stage, trees will be planted on Birzhevaya Square and the Rybny and Bogoyavlensky streets this coming autumn. The streets usually do not have heavy traffic and will not be closed off during the road works.