A year of political messages at the Architecture Biennale in Venice 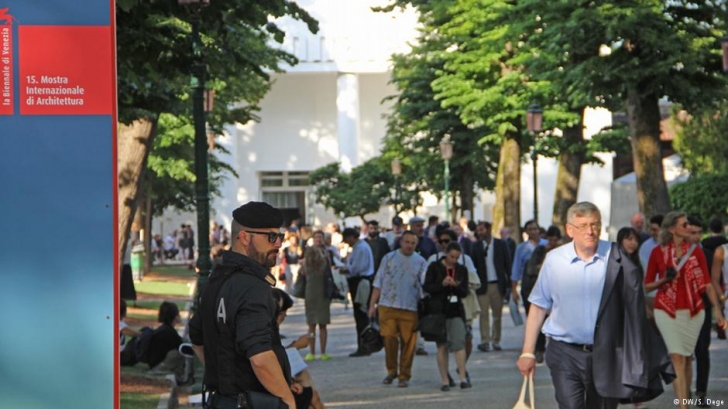 Is architecture the most political of all art forms? A look at the offerings at this year’s Architecture Biennale in Venice — where opposites appear to attract — suggests it may very well be.

Birds can be heard singing in the trees that line the alleyways of Venice. Gravel crunches underfoot. A warm breeze floats in off the lagoon, as the smell of spring wafts between the pavilions along the Biennale pathway.

Yet those who believe they can simply rely on their five senses to guide the way at the 15th International Architecture Exhibition of the Venice Biennale may be confused. Here, multimedia guides the way through the showcase of world architecture. Digital is king, with flashing screens, bizarre lighting effects and 3-D, web-based installations throughout. How could it be any other way in 2016, the post-industrial age?

But the first pavilion brings a sharp return to the senses for the visitor. Here, the head of this year’s Biennale, architect Alejandro Aravena, has set up his main exhibit for the theme «Reporting from the Front» — and it smells like trash.

Polish architect Hugon Kowalski has sorted out old cardboard, glass containers, plastic bottles and metals and stacked them here, inspired by his 2011 university thesis project, titled «Let’s Talk About Garbage.» For the exhibit, he researched Dharavi, a slum in the mega-city of Mumbai, India. Garbage there is an elemental part of the community, creating jobs in the recycling sector, for instance.

It’s examples like these that Aravena is after when he asks: what is the use of construction today? What problems do architects resolve?

There are 88 projects on display at the Biennale, created by architects, offices and institutions and scattered throughout the Giardini Pavilion and the dockside Arsenale complex. Copying and imitation is fair game; Aravena, the Chilean winner of the Pritzker Architecture Prize, is all for social, sustainable construction.

Recycling is the aesthetic focal point of his own contribution to the Biennale. In the first room of the Arsenale, where in past years sponsors set up shop, around 10,000 square meters (about 110,00 square feet) of drywall are plastered to the wall. Strips of aluminum hang from the ceiling — 14 kilometers (more than 8 miles) in length altogether. This is Aravena’s statement about sustainability: in building his exhibit, his team reused the construction materials already on hand when they took over from the group responsible for last year’s 56th International Art Exhibition.
Sculpture made of recycled materials, © Getty Images/AFP/V. Pinto

Meanwhile, in the Swiss pavilion, an unusual, amorphic object fills the room nearly to the ceiling. The cave is made from high-tech materials. It’s hollow, allowing visitors to slip into the womb-like space. «Incidental Space» is curator Sandra Oehy’s response to Aravena’s search for experience: it’s architecture without a use, a radical, sensual statement.

A Biennale of contradictions

The opposite couldn’t be more apparent when one enters the rooms of Germany, Finland and Austria, who all interpreted the theme in similar ways. The presentations, which require a lot of thinking, all center around refugee housing. "Making Heimat. Germany, Arrival Country«is the title of the German pavilion, whose four walls — with the approval of the Venetian authorities for preservation — were broken through and covered in images and texts that make visitors think about the topic of immigration.

The future is built on the past, and culture is the only constant. That’s the similar message of two very different pavilions — those built by Russia and the US. The Russians capture their visitors’ attention with a revolving panorama that fills up a wall and is lit up from behind. It explores Russia’s history of construction.

A walk through the various stories will show a history that begins with a documentary about the agricultural revolution under Stalin in 1938 before passing by artifacts from the Soviet days and contemporary Russian architecture. The 360-degree panorama film confuses the senses. «Russia knows its history,» says curator Sergey Kuznetsov, «most especially, its culture!»

That’s also something the other superpower knows well. Walking across the gravel pathway under a few blossoming trees, you come to the installation by the US, titled «The Architectural Imagination.»

With a look to the future, the team has focused on the motor city, Detroit, where architectural changes brought on by industry are noticeable throughout. Photos of roomy office buildings and communicative neighborhoods are shown. Thanks to sustainable planning, entire neighborhoods are coming to life again — 12 projects in total. Holograms draw in lookers to see what the future holds.

The Israeli pavilion did not take the obvious interpretation of the Biennale theme, «Reporting from the Front,» as something to do with war. Instead, it considered the word front as one that exists between the test tube and the building blocks, between science and architecture.

What can we learn for the production of construction materials from bacteria? What energy-saving technologies can one take away from nature? What is the downfall of an overly-inhabited settlement? Answers to these questions can be found in the Israeli pavilion, one of the most concentrated and serious of the Architecture Biennale.

While Brazil’s curator mixed informational texts, placards, films and projections on construction projects in the favelas of Rio de Janeiro, a visiting child decided on his own interpretation, grabbing a handful of wooden blocks to create his own city.

No less visionary was the presentation at the Kuwaiti pavilion, which centers on the bringing together the islands in the Gulf, a project known as «United Gulf,» showcased using a mock-up on the brightly polished marble floors. Spain, meanwhile, sang the praises of recycled architecture. Yemen, though currently a warzone, appeared for the first time this year courting sympathy and tourists. Thailand explored reconstruction efforts after a previous earthquake.

And the Netherlands? They chose to focus on their reconstruction projects built during the country’s UN peace-building time in Mali. For the opening, they flew in one of Africa’s most sought-after rappers, creating one of the loudest, most impressive events at the Architecture Biennale. It was quite the contrast to the birdsong, and surely wouldn’t be the last at this months-long event.