Video: Living with History in the Russian Pavilion of the 2016 Venice Biennale 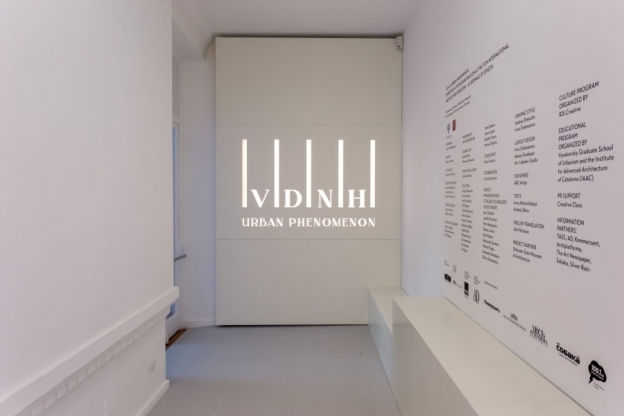 In his latest video, Jesús Granada visits the Russian Pavilion, “VDNh”, at the 2016 Venice Biennale. In the clip, viewers are introduced to the pavilion’s curator, Sergey Kuznetsov, who explains that “VDNh” is an acronym for a large area of Moscow known as Vystavka Dostizheniy Narodnogo Khozyaystva or Exhibition of Achievements of National Economy. Kuznetsov describes the territory as “[an] advertisement for the Soviet Union lifestyle...[meant] to meld lots of people and one nation.”

The VDNh exhibition was originally made possible through the work of local architects, artists, sculptors, graphic designers, and others, but was nearly demolished after the fall of Communism in the early 1990s, as part a plan to fill the territory with more ordinary spaces meant to fuel a burgeoning consumer culture. In 2014, the government of the city of Moscow took control of the VDNh site, renovating it for cultural programs, educational functions, sporting events, and leisure activities throughout the year.

By preserving the VDNh structures, and in turn Russia’s Soviet legacy, Kuznetsov — who happens to be the Chief Architect of Moscow — remarks that the adaptive reuse of the buildings has allowed for the country’s Communist past to have a collaborative relationship with today. Kuznetsov adds that such a practice can assuage differences that can boil over in iconoclastic acts, “[such as Palmyra] — when some people with a new ideology, very offensive to a previous one, just demolish [the architecture] because [it] brings something unacceptable to them.” One might also recall the demolition of the East German Palace of the Republic in Berlin, which was removed in 2006 and is set to be replaced by a reconstruction of the Prussian-era Stadtschloss.

In addressing the idea of “living with (and adapting to) history,” this year’s Russian Pavilion answers Biennale Director Alejandro Aravena’s call for national pavilions that identify domestic responses to architectural dilemmas that could offer solutions to other places with similar predicaments. As the video progresses, viewers are shown the pavilion’s main attraction, a film in the round documenting the architecture of the VDNh and its facilities, which is interspersed with commentary by Kuznetsov, who considers what the future might hold for Russia and offers his own admiration for the VDNh territory, and in particular, the space pavilion which was a source of childhood awe while growing up in Moscow.

This video is part of a partnership between ArchDaily and the Spanish photographer Jesús Granada. These videos have been filmed in 4K, a level of quality that allows viewers to perceive details that don’t come across in standard video formats. Granada’s stock images of the Biennale can be obtained on his website, here.