How Penguins Inspired the Design for Russia’s Next Silicon Valley 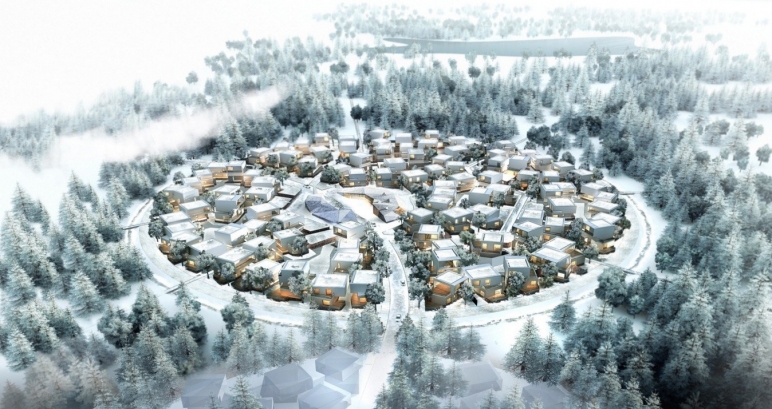 The energy-efficient clusters, which will house researchers and their families, will be tightly positioned in the same way penguins form a circle to share their heat.

Dreams of a Russian “Silicon Valley” started becoming reality in 2010, when then-president Dmitri Medvedev announced the creation of a sprawling tech hub, dubbed the Skolkovo Innovation Center, situated just outside of Moscow. Since then a cadre of international architects has been tapped to design separate elements of the complex, which offers research and educational labs, office space for savvy start-ups, networking opportunities, and eco-friendly residential nodes. (Skolkovo also recently made history with the successful debut of the country’s first self-driving bus, which will start commercial production next year.)

Among the architects chosen to handle housing for researchers and their families was Paris-based firm Agence d’Architecture A.Bechu. On a roughly four-acre swath, the studio devised a circular community composed of a hundred single-family dwellings. The energy-efficient, concrete-framed homes are clustered “much like penguins on an ice shelf forming a circle to share their heat,” said the firm in a statement. “The intention is to create micro-communities organized around a central space that provides the atmosphere of a village square.” That public square, which will hold services for residents, will “provide a landmark for cars entering the site and a real social link for all the inhabitants.” A green roof will also crown each dwelling, bolstering Skolkovo’s eco-conscious bona fides.

The architecture firm has not announced a completion date.