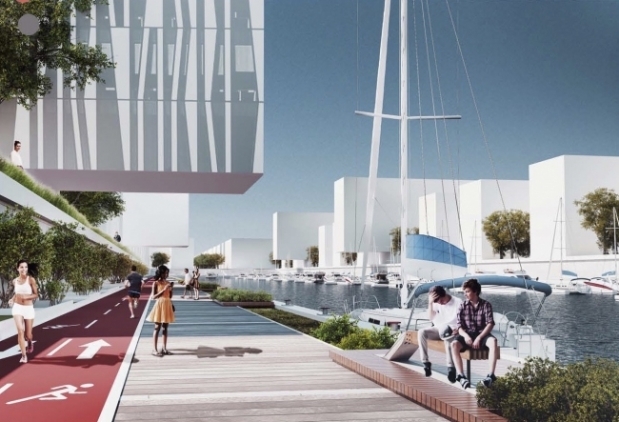 Nine teams were involved to work on the projects; St. Petersburg’s industrial area of approximately one hundred hectares was divided into sectors for each team, which received 500,000 rubles. The competition concepts are to be used, in particular, in the work on the new General Plan for the development of St. Petersburg, which is due to start in 2018.

Under the terms of the competition, each of the nine qualified teams was to propose a concept for the spatial development of the territory of about 4,000 hectares from the west of the Ekateringofka River and to the Neva River in the east, from Obvodny Canal in the north and to the residential areas in the south, and to demonstrate possible implementation of the concept by the example of one pilot area transformation.

Explaining the jury’s final decision, Sergey Kuznetsov, said that MLA+ Architectural Bureau offered the most interesting plan for the development of Volkovskaya area, which takes into account the current situation. “What I liked in Ekateringof Project is that the historical park was proposed to be made as an architecture growth point that will attract local residents and tourists, which will bring about the development of the adjacent area. Reconstruction of Frantsuzskiy Kovsh by Evgeny Gerasimov and Sergey Tchoban, in its turn, was performed at the level of European cities. The contestants carefully studied these areas and gave their suggestions to find the balance between the functional zones: 40% — housing, 30% — workplaces and 30% — public spaces,” said Kuznetsov.

AB “Rozhdestvenka” got the highest number of points, having surpassed two other teams from Moscow — TPO “Reserve” and “Yauza project”, in the rating vote related to Ekateringof zone. Dutch team surpassed “Helin & Co”, Finland and “Studio-44”, St. Petersburg in VolkovskayaProject. Evgeny Gerasimov and Sergey Tchoban with their ideas for the reconstruction of Frantsuzskiy Kovsh beat Architectural bureau “Zemtsov, Kondiayn and Partners” and “Transborder Studio”, Norway.

According to the Vice Governor, Igor Albin, all the nine teams that took part in the competition made interesting proposals; and the city will certainly use their ideas. It is only necessary to come up with the ways to get the owners and residents of these areas interested in the implementation of the conceptual ideas. The Chief Architect of St. Petersburg, Vladimir Grigoriev, noted that it was difficult to determine the winners as the jury members often differed in their opinions.