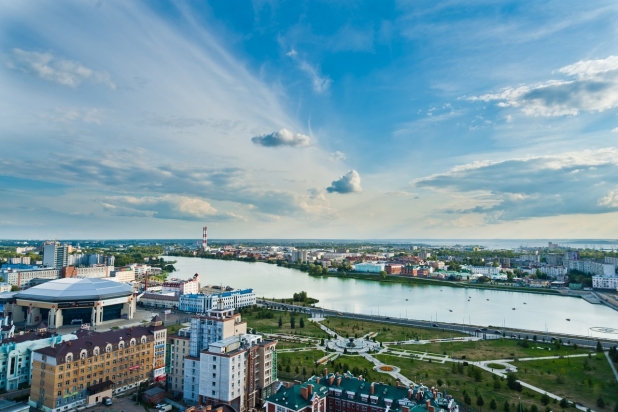 Kaban is a lake system located within Kazan’s city boundaries. It consists of three lakes — Lower Kaban, Middle Kaban and Upper Kaban extending from north to south and connected via channels. They are the largest in Tatarstan. The lakes valley extends for almost 10 km and covers the territory of several hundreds of hectares. The lakes have a historical background and are a natural monument. Many historical legends are connected with them, one of which says there are treasures hidden in the lakebed silt. Such myths and legends form the cultural code of the city.

Regular shipping traffic was established between the rise of Bulak in Lower Kaban and the townhouses of Farther Kaban. Over time the shipping service has lost its importance for transportation and navigation which ceased to exist, but the aquatic area of Kaban is still used as a rowing channel by multiple sporting societies located on the lakesides.

An open competition for the development of the Kaban lake system embankments opened on June 18 2015 by the initiative of the Temporary Acting President of the Republic of Tatarstan Rustam Minnikhanov. The competition is held under the authority of the Republic of Tatarstan Government. The organizer is the agency for the strategic development «CENTER».

The outcome of the competition will be an a architectural planning concept for the embankments for three lakes, which will take the existing urban surroundings into account, and a schematic design of one of the embankmant sections of the first construction phase.

Stage 1 will be a preliminary selection test where the participants are to provide an application form, a portfolio and an assay describing the key ideas of their concept.

The short-listed finalists will be presented on July 7 th , 2015 on the Urban Forum in Kazan. On the same day the second stage of the competition begins and the 10 short-listed teams start to develop the embankment concept. The first 5 finalists will get the reward of 600’000 Rubles each. The competition closes on September 29th, 2015 subsequent to a final Jury session, when the Winner is chosen.

The Winner receives 1 000 000 Rubles and a contract for the design project development of the future embankment.

The Jury consists of key representatives of the Republic of Tatarstan Government, as well as the leading Russian and Moscow architects, urban planners, landscape and environment experts. The Jury’s chairman is the Mayor of Kazan, Ilsur Metshin.

The independent Expert board is represented by the specialists in various fields, social activists and city dwellers. The board’s task is to evaluate the finalists’ concepts and to provide recommendations for the Technical design specifications of the competition. The Expert board is led by Natalia Fishman, the Assistant of the Republic Tatarstan President.

All teams short-listed for the second stage will be enlisted for the work on other town-planning projects in the Republic of Tatarstan held within the context of the Water-Conservation Zones Year — in Kazan, Naberezhnye Chelny, Nizhnekamsk, Almetyevsk and other cities. Visiting sessions with the President of the Republic are organized to introduce the context of the competition to the finalists.

The competition for the lakes embankments concept is a significant event in the development of Kazan and the entire region because public spaces, such as embankments, squares and parks, form the image of the entire city. From ordinary leisure zones these territories are transformed into outdoor cultural and social centres, predetermining a new quality of life in the city. The organisation of the competition is an important step of the Republic government towards the improvement of social space design quality and involvement of the citizens in the development of urban environment.

Ten finalist have been shortlisted. The competition will now ask the remaining teams to work on other town-planning projects in the Republic of Tatarstan held within the three context of the Water-Conservation Zones Year — in Kazan, Naberezhnye Chelny, Nizhnekamsk, Almetyevsk and other cities. Visiting sessions with the President of the Republic will be organized to introduce the context of the competition to the finalists.

On October 1, the mayor of Kazan announced the winner of the competition for conceptualization the development of embankments systems of lakes Kaban. The best project considered to be the Russian-Chinese consortium Turenscape + MAP architects with a concept called "Elastic tape: Immortal treasure of Kazan".

The project is expected to create 3 types halting  in tape landscapes:

Environmental tape: combines green areas into a single system, and provides effective management of wastewater contributes to ecological diversity of the region.

Cultural tape: integrates local sites of historical and cultural heritage, this tape creates an effective social infrastructure along the coasts, offering a varied program of activities.

The low-speed transport tape: part of this tape will be the creation of a low-speed transport (primarily cycling) and improving of public transport, which will make the lake area to become more accessible to all guests and convenient for pedestrians and cyclists.

The project is planned to start in spring next year at the expense of means of private investors. The first line — the square in front of G. Kamal theatre, and further along the street Marcel Salimzhanov.