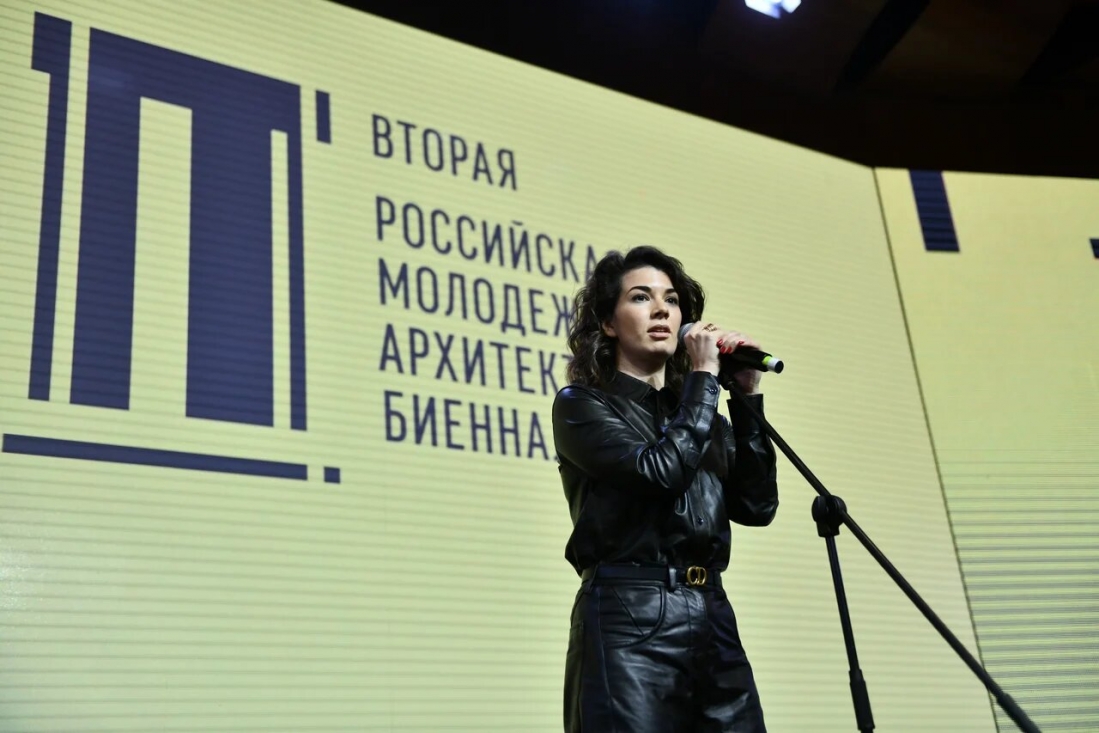 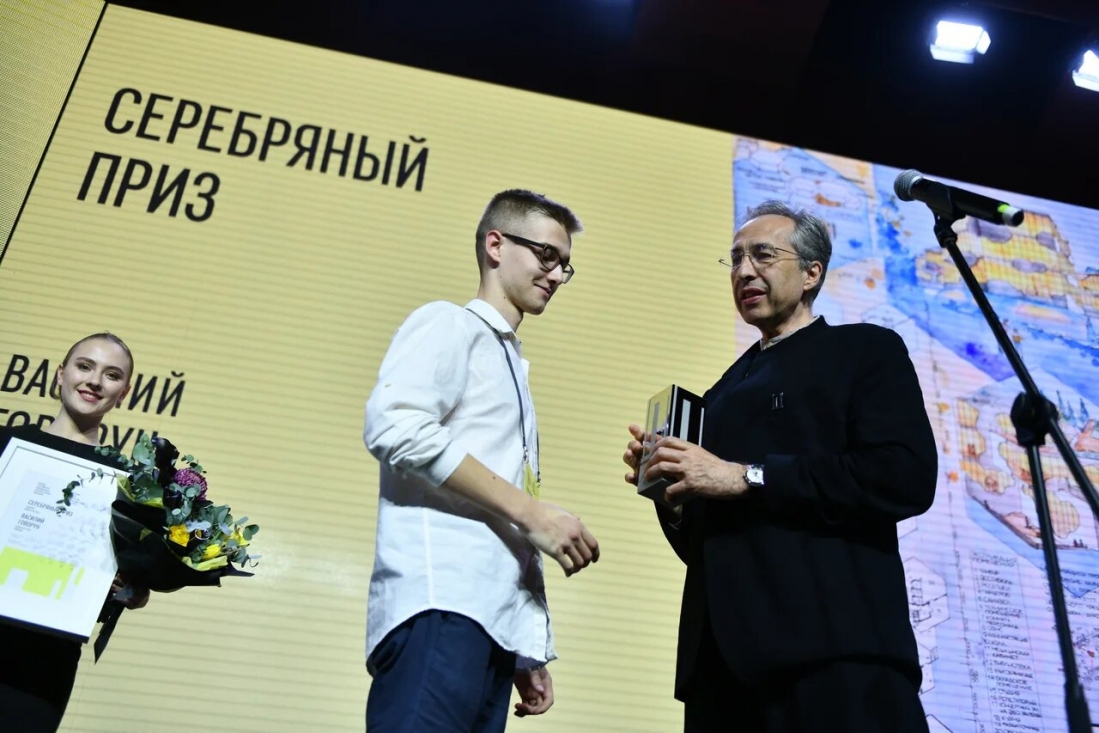 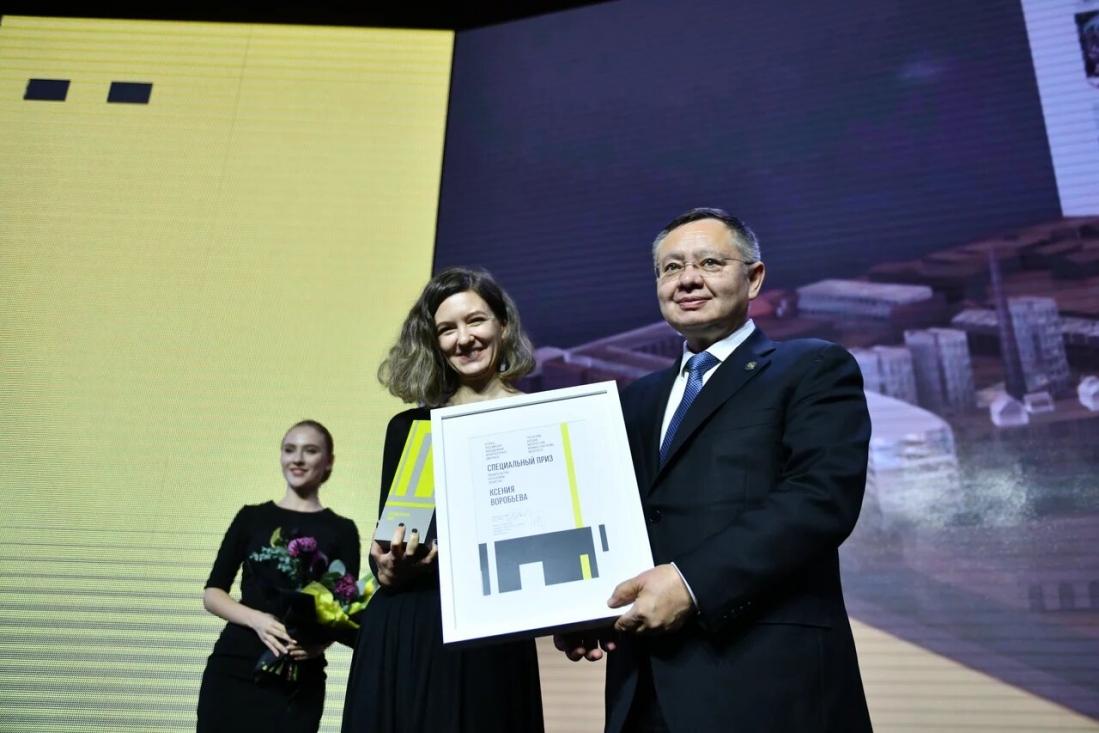 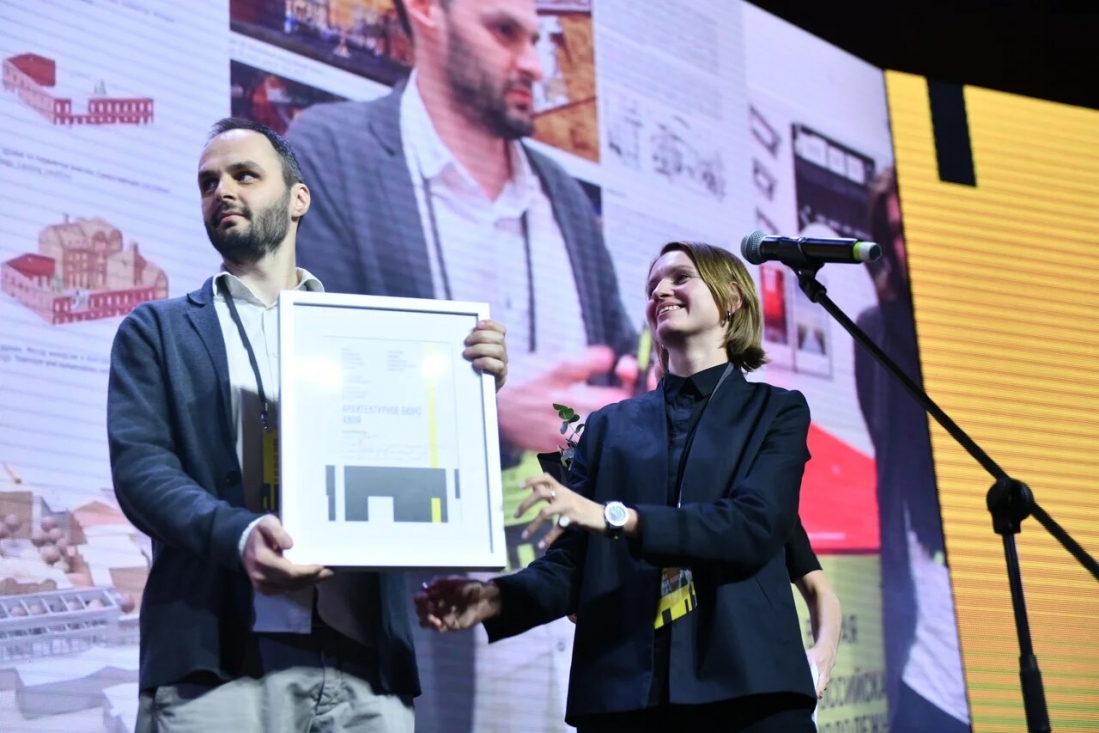 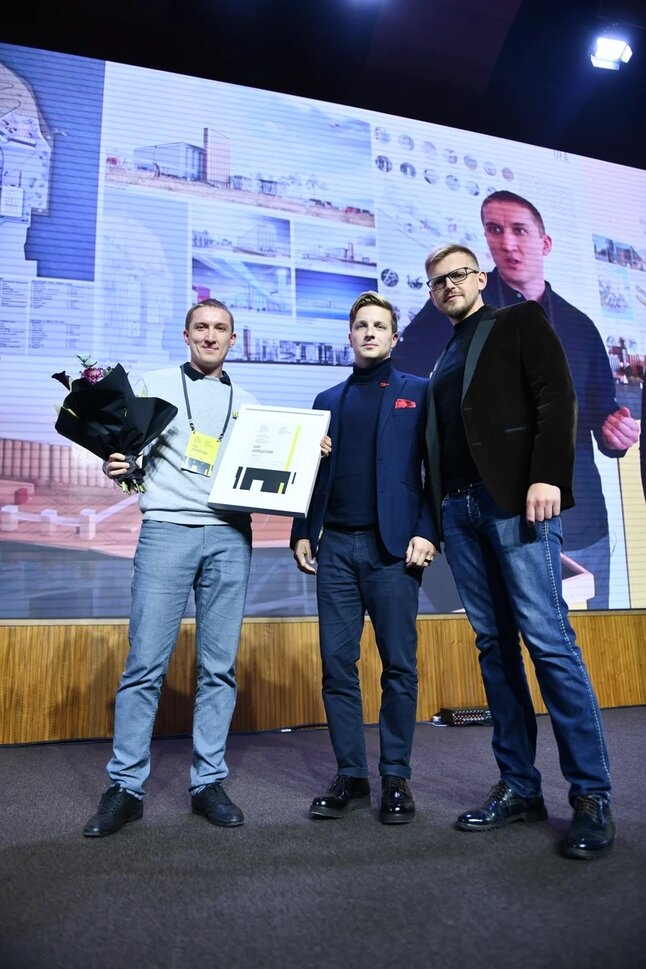 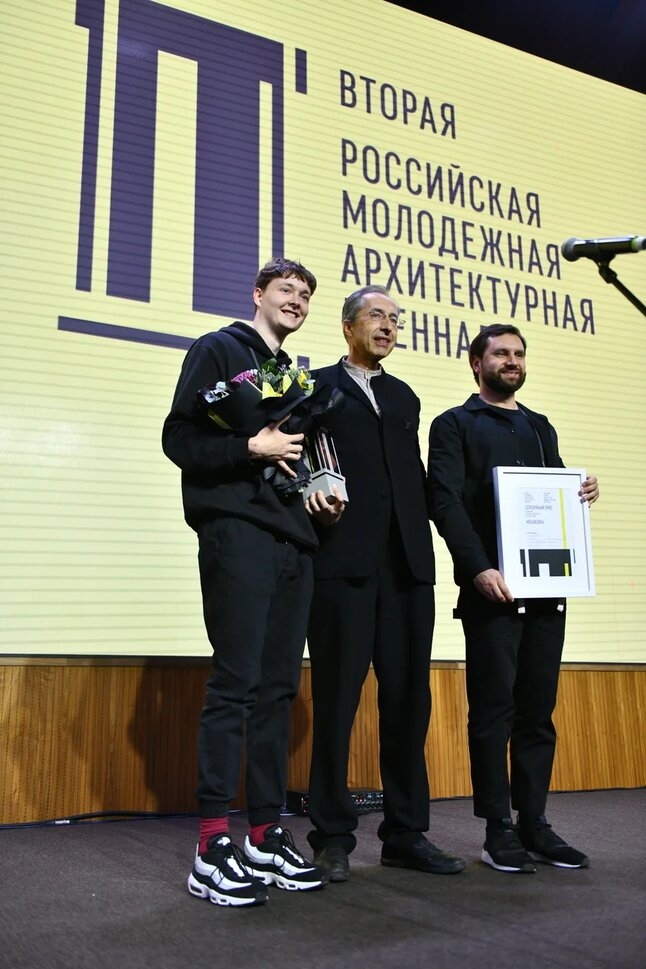 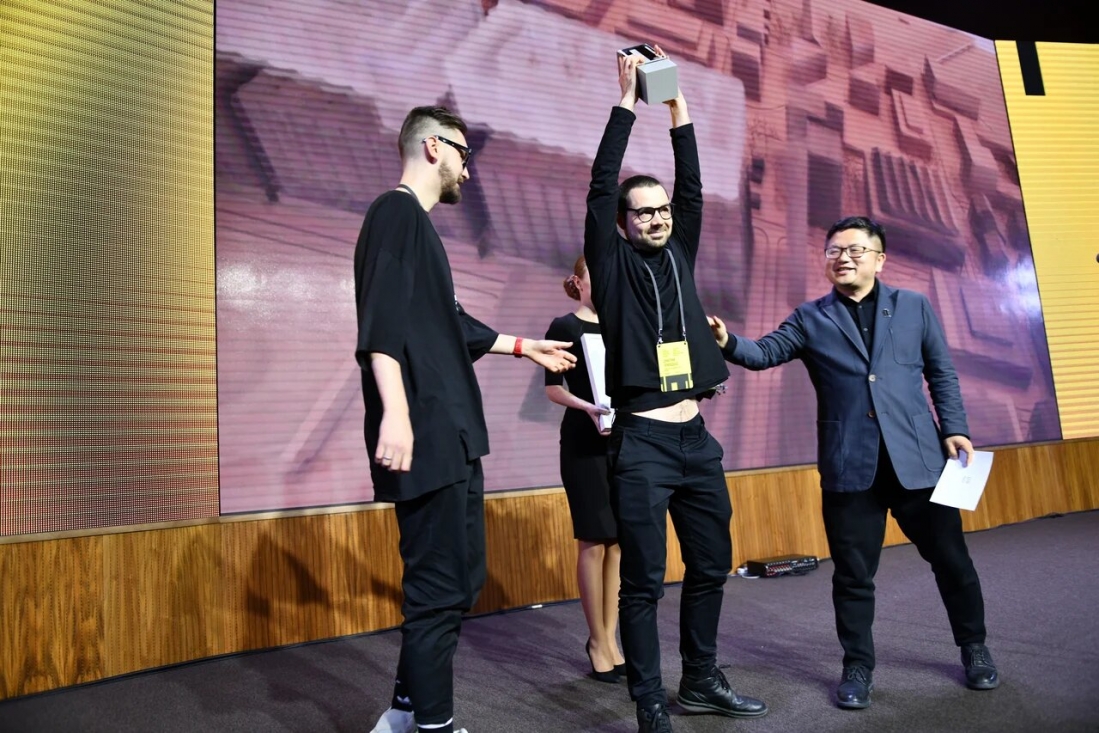 On October 26th, 2019 the jury of the Second Russian Architecture Biennale for Young Architects announced the winners of this year’s competition. The jury members chose the best four of 30 projects by the finalists for the Gold and Silver Prizes. Special prizes were presented by the Russian Ministry of Construction and Housing and Communal Servicesand the Government of the Republic of Tatarstan; there were also two special mentions awarded by the jury.

The Gold Prize for redeveloping the site of the former Santekhpribor factory was presented to Alexander Alyayev (Moscow); Silver went to KB11 from Ufa. For the Port Elevator site, Leto (Moscow) took the Gold Prize and Megabudka (Moscow) was awarded Silver.

The Russian Ministry of Construction and Housing’s special prize went to Ilya Obodovsky from Simferopol. The special prize of the Government of the Republic of Tatarstan was awarded to Kseniya Vorobieva, also from Moscow. Projects by CHVOYA (St. Petersburg) and Azat Akhmadulin (Ufa) were awarded special mentions by the jury.

“In evaluating the projects,” said Sergei Tchoban, the curator of the Second Russian Architecture Biennale for Young Architects, “the most important criterion for us was how they would be carried out. We wanted to see a clear understanding of which elements could be preserved, which could not be preserved, and how they would be transformed to ensure truly sustainable, long-term development of the sites. Deciding on the winners was difficult, but in the end we were all pleased with the final decision and are eager to make it public.”

In addition to the main competition, this year for the first time the biennale included an architectural-artistic competition for 9th and 10th grade students at Russian schools. The young contenders submitted illustrated architectural plans for a comfortable, functional, and visually appealing school — the kind of school they would like to attend themselves. The winners were Vasily Govorun from School 2054 in Moscow (Silver Prize) and Almira Fattakhova from DASHKA Children’s Architectural School in Kazan (Gold Prize).

“This year we saw some important changes,” said Natalia Fishman-Bekmambetova, the biennale’s director. “The briefs we set involved working with specific sites, not abstract spaces. This way we can influence the development of key sites in our capital city. Essentially, we are creating a catalogue of concepts that can be used in other similar projects. We intend to commission real projects from all the prize winners and winners of special awards.” 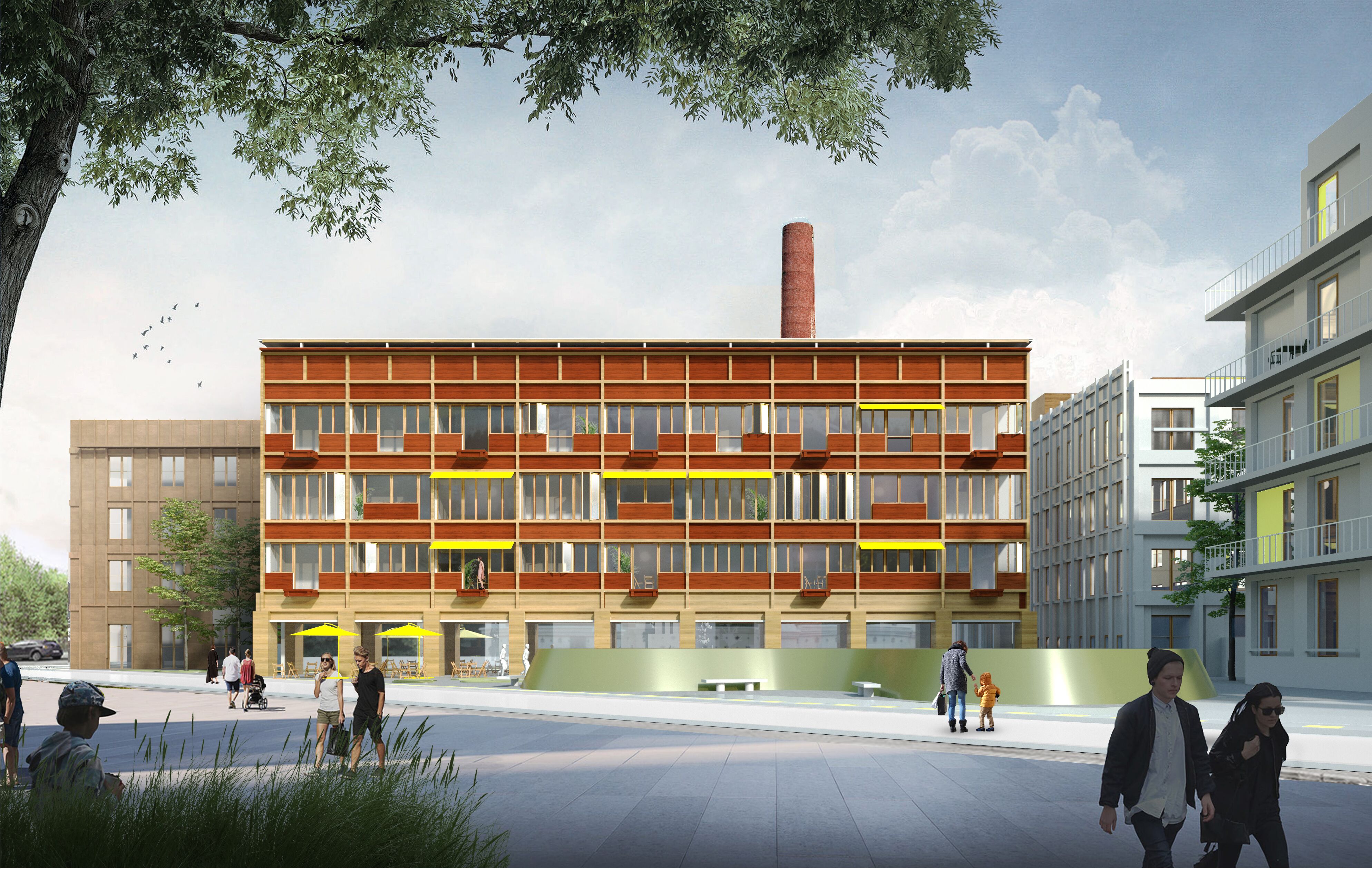 The principal aim of this revitalization project is to radically transform the site’s urban structure in order to make it as permeable and accessible as possible. The excessively extensive northern part of the Santekhpribor factory site is to be split into two parts matching the size of the standard urban street block (100 x 150 m.); three similar street blocks will be created in the southern part of the site. In addition to softening the scale of the development, this layout approach makes it possible to create a new vehicular and pedestrian axis in Admiralteyskaya Sloboda. Both parts of the site will have a mix of functions, but each will have its own ‘specialization’: the northern part of the Santekhpribor site will be mainly residential, while the southern will have a creative and manufacturing cluster comprising office spaces, workshops, small modern manufacturing units, etc. The morphological similarity of the street blocks is to be emphasized by their compositional design and layouts: each will consist of small blocks forming a system of consistently developing public spaces which differ in degree of seclusion and intimacy. All the historical buildings on the territory of the old factory are to be preserved and given mainly public functions. Around them buffer zones will be created, allowing the listed buildings to ‘resonate’ as freely and fully as possible. The design of the public spaces will also include street furniture and installations making metaphorical allusions to the site’s industrial past. The residential development will mostly consist of 4-storey houses; only the most important spatial axes are to be marked out using taller landmarks of up to 24 metres in height. 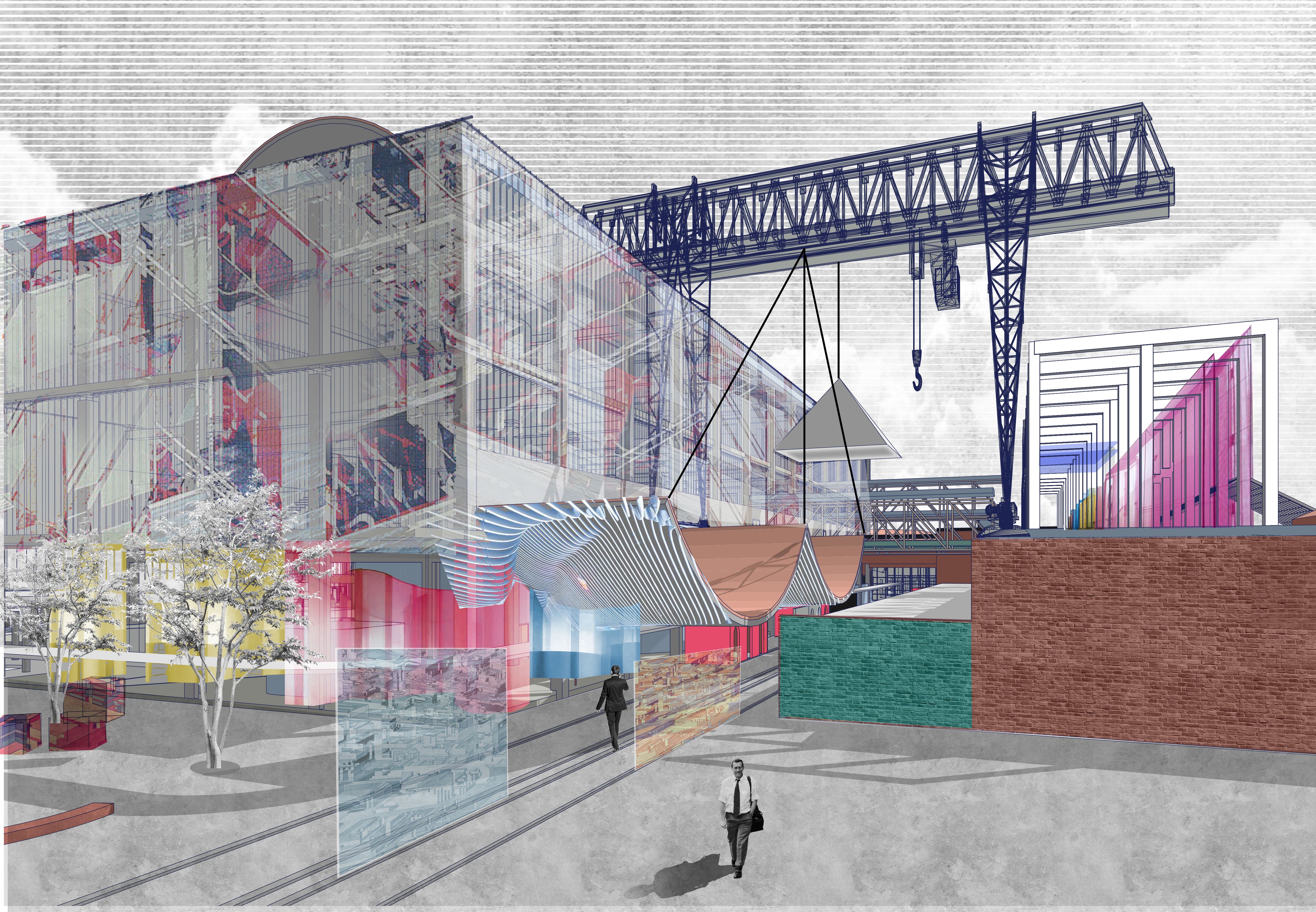 The proposal by KB11 looks to culture, not manufacturing and industry as the motor for development of the territory of the Santekhpribor factory. Previously monofunctional, this site will now have a wide range of different functions, spurring transformation of the extremely rationalistic freestanding volumes into flexible urban structures. The northern part of the site is treated as a mainly public space bounded by the existing walls of the industrial buildings and by temporary pavilions. Here an extremely lively terrain is to be created by conserving the historical layer of manufacturing waste; the latter will be deliberately left on the site in memory of its past and of the tragic decline with which we are confronted here today. The boundaries of the site are to be denoted with columns and decorative areas of water whose configuration will repeat the outlines of the buildings that once stood here. Between these elements the existing well-worn path is to be upgraded; this will be backed up by a system of bridges and passageways. A kind of city-utopia will be created in which people will undergo a unique spatial experience, including through the erosion of the boundaries between outside and inside space and between urban and domestic furniture. In order to make the ruins suitable for all-year-round use, inserts are to be created inside and between them in the form of understated glasshouses and mobile luminous volumes on vertical tracks. During the daytime the luminous structures will serve as hospitable lounge areas at ground level; in the evening they will be raised above the site and provide it with illumination. Counterbalancing this space, the southern part of the site is to be treated as a concentration of striking emphases and energetic spatial forms. 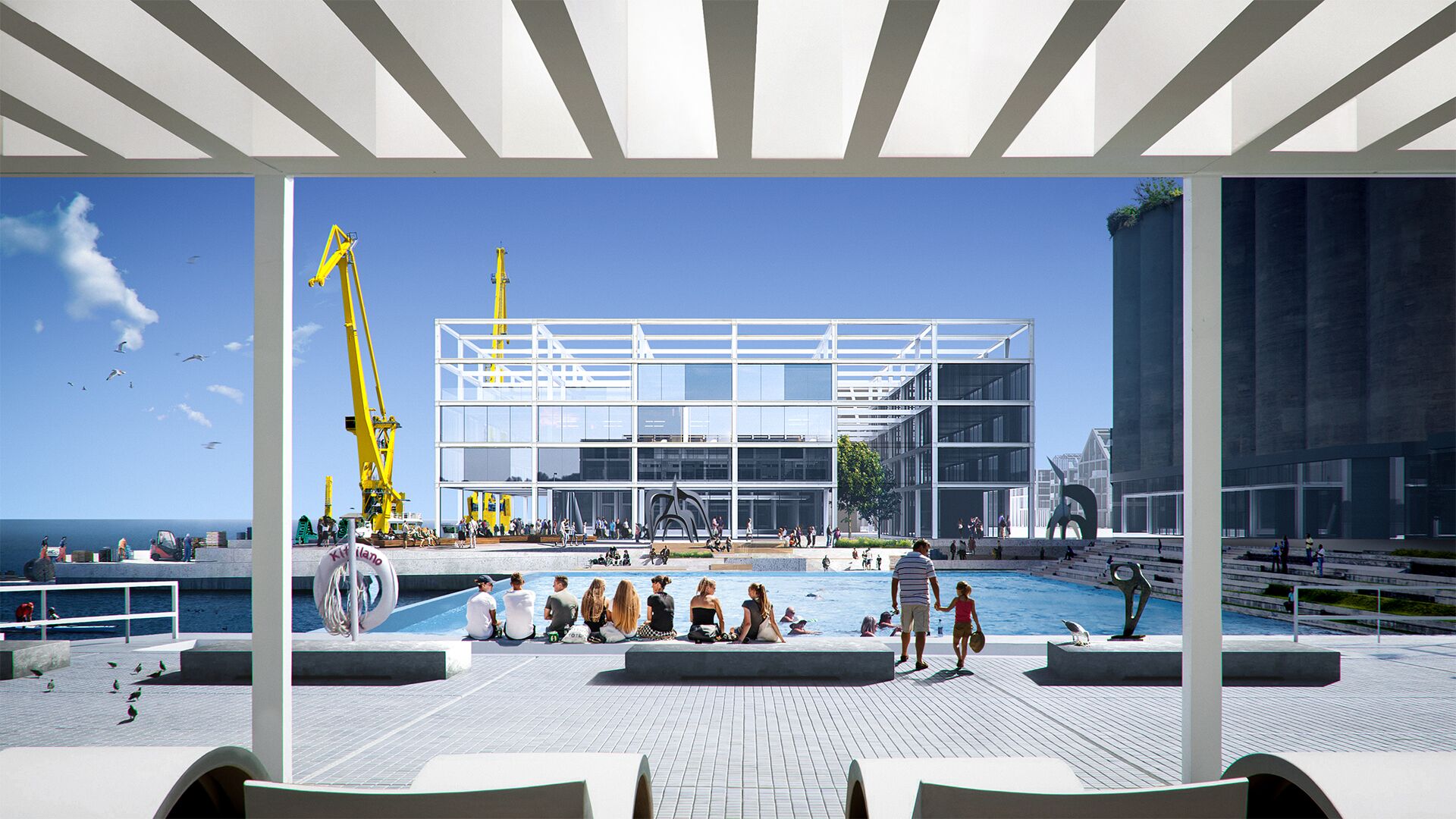 This project aims to develop the site and all adjacent territory in accordance with the urban-planning principles for Kazan’s historical centre, where the dense urban fabric consists of mid-rise multifunctional development. High permeability and a coherent system of visual links with the embankment are to be ensured by a rectangular street grid and the compact character of the street blocks which are to be erected here. Each transverse street will have its own identity and atmosphere. The project treats the elevator as a valuable item of industrial heritage and the main symbol of the local centre. Rethinking its function and place in the structure of the city, the architects have interpreted it as a new church: like the religious buildings in medieval cities, it enters into interaction with the surrounding smaller-scale development, forming a system of squares abutting each of its four façades. Each square is to have its own identity deriving from the functional content of the elevator blocks and the adjacent development. The ‘aquatic square’, situated in the north-west, will have a market, an amphitheatre leading to the water, and a public pool, making this a kind of buffer between the city and the river and allowing the latter to approach the building as gently as possible. The ‘sports square’ abutting the elevator’s south-west façade is to contain a sports centre, a climbing centre, and a skatepark. The north-eastern façade will look out onto a ‘science square’; this will be overlooked by a mediateca situated in the elevator building and a school opposite it. The ‘city square’, onto which the museum faces, will be the heart of the entire local centre and its main transport hub; this will have a public-transport stop, a taxi stand, and an underground car park for private vehicles. The fifth and most spectacular square will be situated on the elevator’s roof and will be the principal recreational and viewing area for the entire district. 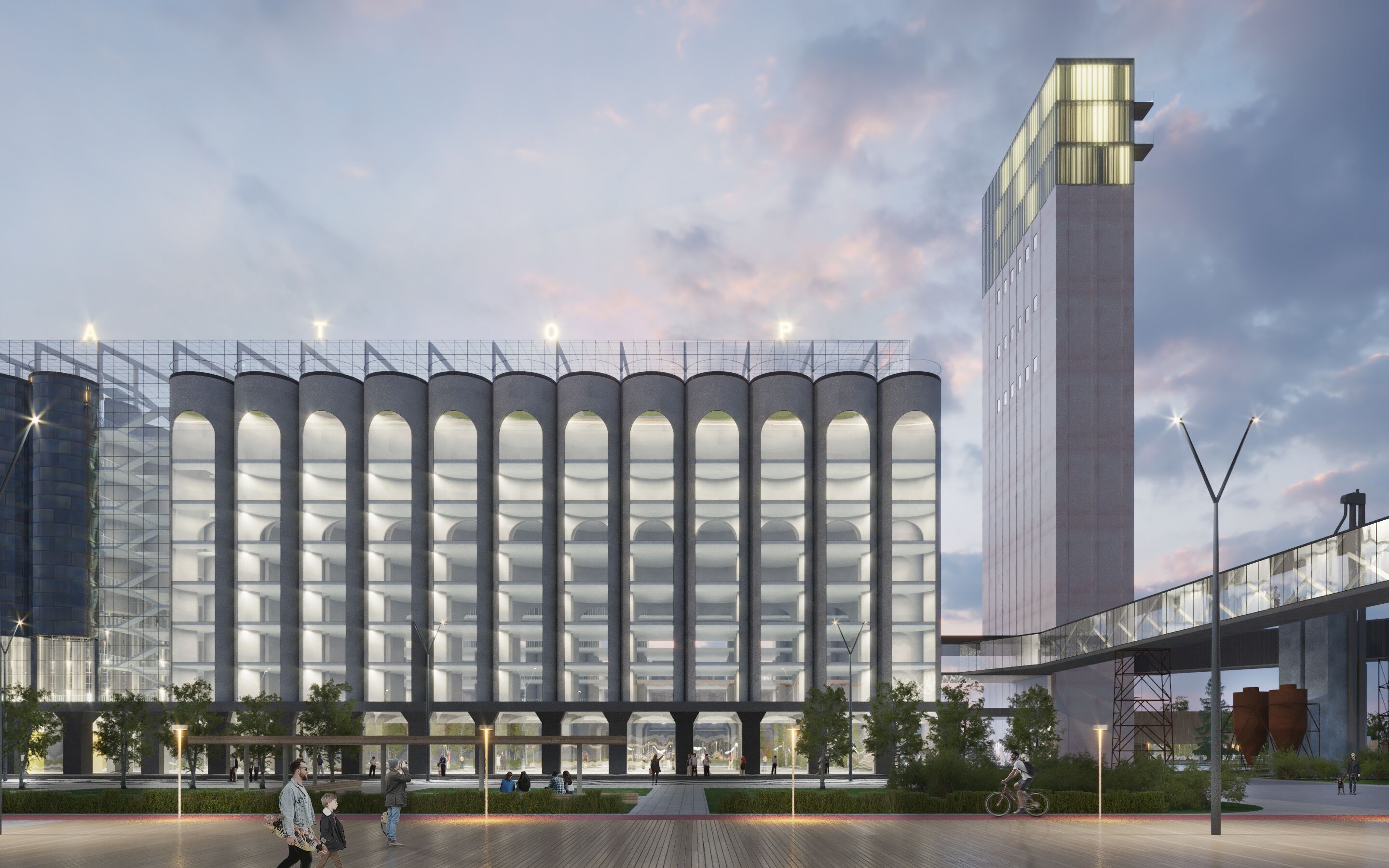 All buildings on the spit, with the exception of the elevator building, are to be dismantled, and on the spit’s perimeter a continuous embankment, 50 metres wide, with vegetation, a cycle path, and a chain of entertainments and public functions (cafés and bars, sports areas, playgrounds, recreational areas) will be created. This linear park will be echoed by a large semi-circular park on the promontory of the spit. Since clearing the water of the effects of the operation of the freight port will inevitably be a time-consuming process, Megabudka proposes for the purpose of summer recreation creating a ‘dry’ beach and preserving the existing retaining wall on the spit, while providing a capacious floating pool on an old barge for swimming in. The architectural design for reconstruction of the elevator is to be entirely dictated by this building’s geometry and structural characteristics. While carefully preserving the overall brutal character of the elevator, its original proportions, and the circular shape of the silos, Megabudka will cut tall arched windows into all the external cylinders; the two central rows are to be removed in their entirety in order to create an atrium. The top storey of the elevator is to be glazed, yielding attractive views of the Volga and illuminating the atrium. The centre of the building will contain a multifunctional space with vaulting consisting of cylinders held in place by a metal framework. The building’s programme will also be emphatically diverse, including both cultural and educational institutions, commercial spaces, and an apartment hotel. Along the elevator’s long façades landscaped pedestrian squares will be created; here the original railway tracks will be preserved as an important element of industrial identity. In memory of the tracks’ previous function a composition consisting of freight wagons will be installed; the wagons will contain a children’s playground, a café, a recreational area, and a bookcrossing facility.

Curator of, and chairman of the jury for, the Second Russian Architecture Biennale for Young Architects: Sergei Tchoban, head of SPEECH architectural office (Russia) and Tchoban Voss Architekten (Germany)

Director: Nataliya Fishman-Bekmambetova, aide to the President of the Republic of Tatarstan

Innopolis, Russia’s youngest and most high-tech city and a satellite of Kazan, hosted the Second Russian Architecture Biennale for Young Architects from October 24th to 26th, 2019. The aim of the biennale is to support young architects and draw them into the field of urban development.

This year, 739 applicants from six countries and 53 cities submitted projects – almost twice as many as for the first biennale. Architects and urban planners under the age of 35 sent in applications from Moscow, St Petersburg, Kazan, London, Miami, Delhi, Beijing, and Pisa. From these applications, 30 finalists were chosen.

This year’s theme was ‘giving a second life to industrial sites’. In 2020 proposals by the finalists at the Second Russian Architecture Biennale for Young Architects will be shown at the Aedes Architecture Forum in Berlin. Aedes is the first independent architecture gallery in Europe; it exhibits work by specialists in contemporary architecture and urban design.