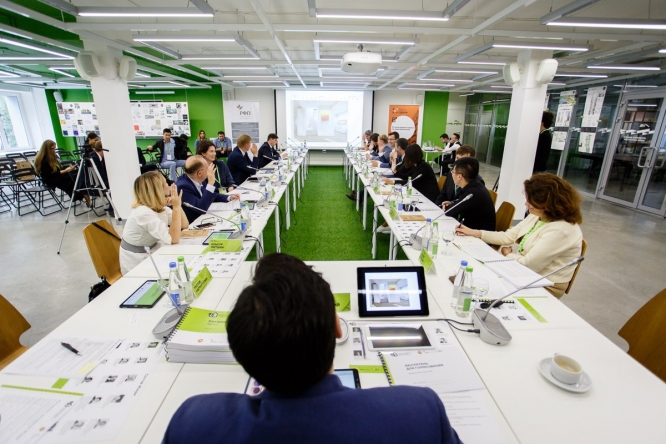 The first preliminary phase of Open International Competition for creation of the concept and master plan of eco-district in Kazan, chaired by President of the Republic of Tatarstan Rustam Minnikhanov, finished on 22 August.

Rustam Minnikhanov, President of the Republic of Tatarstan, chairman of judges:
«An issue connected to the problems of Tatfondbank encouraged us to make a decision about creation of the Fund and establishing a source for compensations. We explored our resources. And our largest pool is these 760 ha of the territory located 300 m away from Volga, 15-minute drive from the city centre. It is absolutely new urban environment. We want that the concept and master plan were up to the present challenges. That’s why we decided to make an international competition. I am sure, it is a right decision.
I’d like to thank all people involved in this work. Such a great work has been done! Sure, we have microdistricts, but to consider this task in such a holistic manner and solve such task, we’ve never done that before. It must be the most attractive project, both from the point of ecology and from the point of residence. And we want it to solve the task of our Fund”.

The professional jury consisting of representatives of governmental bodies of the Republic of Tatarstan, experts from the fields of design and architecture, real estate, urban-planning, economy, and landscape architecture have considered 47 applications from 19 countries. The applications have been submitted by 27 international and Russian consortiums and 22 individual participants. The participants have been assessed through their portfolios on the relevant already implemented projects and essays with description of key ideas which they are going to fulfill, if they are getting into a final of the competition.

Airat Nurutdinov, Assistant of the President of the Republic of Tatarstan, jury member:
«The discussions were rather difficult, as a lot of strong applications had been submitted and a lot of consortiums which prepared really well. I should point that we have three main vectors in this competition. The first is economy, the project has to be implementable and cost efficient, the second is that the project has to blend in the urban planning concept of present Kazan development, and the third point is that we need the landscape and natural structure to be preserved to the max.”

Following the voting of jury 3 finalists have been chosen:

«The geography scope of those wishing to take part in this project is really impressive! I’d like to thank all participants of the competition. 122 applications have been considered from almost 20 countries. These are international consortiums, and their participation is very important for us. Special thanks shall be given to the Fund and Airat Rafatkovich Nurutdinov, our President Rustam Nurgalievich Minnikhanov.
I’d like to say few words about the beginning. There have always been artillery supply depots, but thanks to the lobbying skills of the President of Tatarstan, his wish to change our city and create new environment, we arrived at creation of this project. It all happened because our President pays much attention to the capital of Tatrstan – Kazan.
Why do consortiums take part in the competition? Because here we need not only architectural ideas, but also precise calculations to ensure that the project is initially economically successful and implements the tasks which have been addressed by the President to the Fund.
For me, as a mayor, today is a good day. It’s really great joy that we are having such projects which will be interesting not only for Kazan residents. I am sure that it will be the city’s ‘magnet’, where the residential property, apartments, and houses will be bought not only by the residents of Tatarstan and Povolzhskiy region, but also the residents of the capital, Saint-Petersburg and other regions.”

The finalists are having 2 months of work on the project of the competitive territory ahead of them. On 6 November in the jury meeting they will introduce the architectural and urban-planning concept and master plan of eco-district, framework financial model of implementation of the concept until 2030, detailed architectural and urban-planning concept and rough design of the territory of the first stage of implementation.

Sergey Georgievskiy, chairman of the Competition Organizing Committee, General Director of Agency for Strategic Development “Center”:
“All three international consortiums are coming to Kazan in the nearest future and will be preparing their projects in cooperation with us on Tatar’s land. The first thing that is awaiting them is the competitive site. There, we are going to carry out a project seminar, where the work will be started. And I hope that in the final we’ll have three  entirely implementable projects, each of which will claim to become the new ‘pearl’ not only for Kazan, but which also will open a new chapter in the topic of eco-designing and construction in Russia and worldwide.”

The winner of the competition will be announced on November 7.
Contest official web-site:: https://www.contestkzn.ru/
Site of the survey of the territory: https://www.researchkzn.ru/