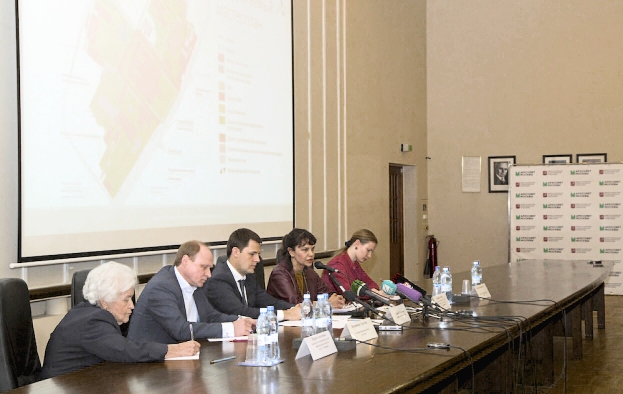 The museum decided to hold a new architectural competition after last summer the author of the previous concept, Lord Norman Foster, refused to have any connection with the project, and the project itself was considered unworkable at the August 14 Architectural Council session due to the proposed demolition of three historic buildings in the quarter bounded by Kolymazhny Lane. The new competition will be a closed one, and this time only Russian architects have been invited to participate. The three bureaus already have solid reputations, although none of them have museum building projects in their portfolios: Project Meganom, Sergey Skuratov and Reserve. They will have to design at least one new building in the complex, as well as adapt the existing historical structures for a variety of museum functions.

At the press conference the chief architect of Moscow, Sergey Kuznetsov, stated that the competition will be conducted in one step, from April 10 to June 12; by June 20 the projects will be evaluated, and the winner will be announced on June 24. According to information published on the website of the Pushkin Museum, the jury will be chaired by the chief architect and will include Deputy Minister of Culture Pirumov Gregory, Head of the Department of Cultural Heritage Alexander Kibovsky, Director of the Pushkin Museum Marina Lochak, President of the Pushkin Museum Irina Antonova, Moscow Kremlin Deputy Director for Scientific Work Andrei Batalov, and the architects Alexander Skokan, Levon Airapetov, David Chipperfield (UK), and Enrique Sobejano (Spain). Furthermore, the Pushkin Museum has formed an expert council for the competition which includes architects and experts in historical heritage.

The concept of the museum’s development on which the architectural design will be based on has remained basically the same (in 2008 the first architectural competition was held based on this concept). According to Irina Antonova, the idea of having a museum complex around the main building was thought up by the creator and first director of the museum Ivan Tsvetaev. With this goal, the Pushkin Museum was able to unite 11 buildings around it since 1961; however, during the implementation of this current project a few more will still be added.

The French consulting company Avesta headed by Paul Alzraa helped in developing a more detailed master plan for the development of the Pushkin Museum cluster. In particular, they have been working out the major issues concerning distributing the flows of visitors, organizing entrances, and structuring the area taking into account the rich historical environment. 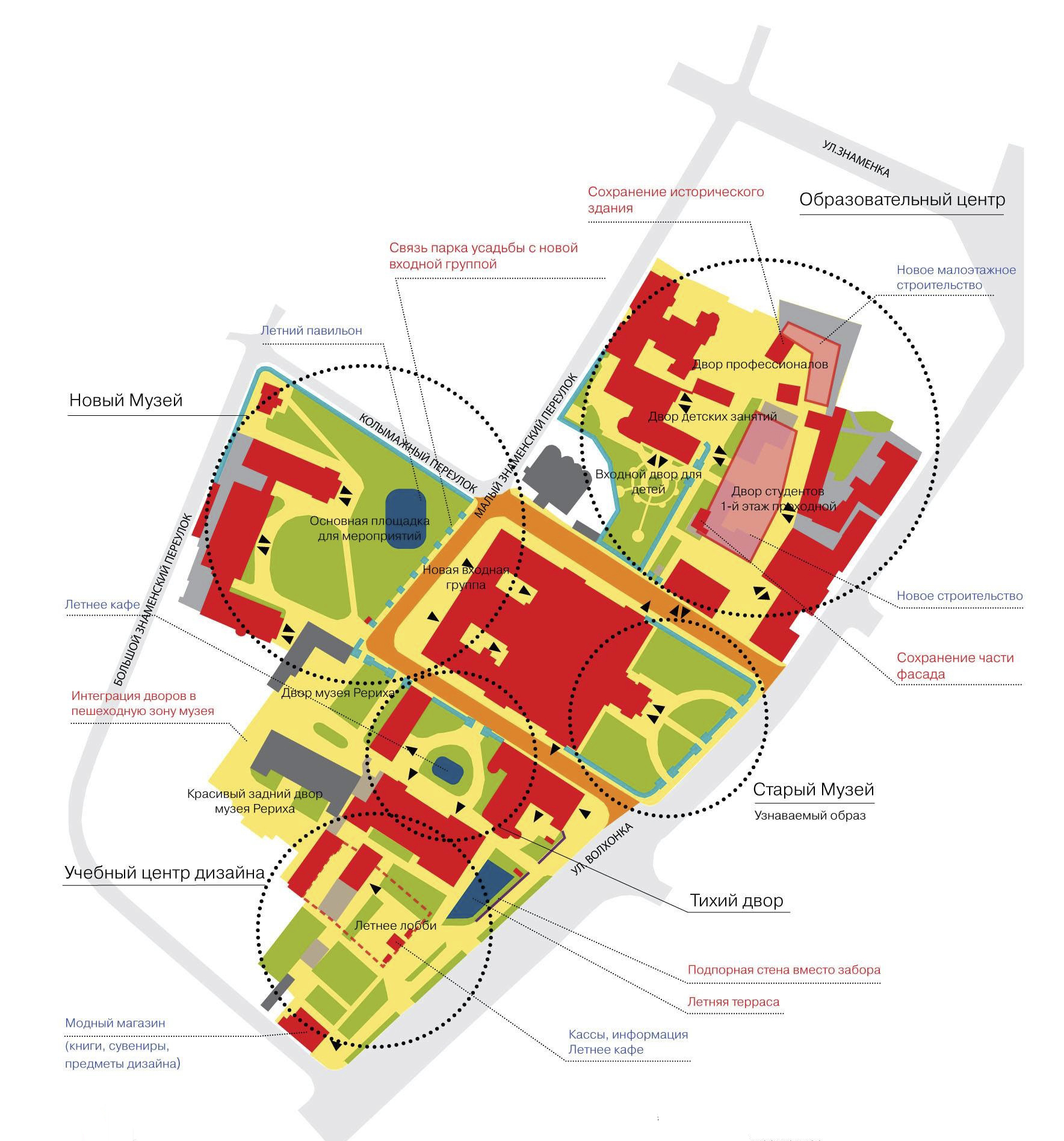 The entire territory of the museum quarter which is marked off in the master plan as the area between Volkhonka Street, Znamenka Street and Bolshoy Znamenskiy Lane, is being considered as a public pedestrian area with the ground floors of various sites open to the city. About half of the sites are designed to exhibit collections, the other half is for new infrastructure, from lecture and temporary exhibition halls to art galleries and cafes.

The system of pedestrian paths includs several courtyards of different functional content, including the one of the neighboring Roerich Museum. The main open air courtyard will be situated behind the main museum building by the architect Klein and the Vyazemsky — Dolgoruky manors from the 18th-19th centuries. And this area should attract many visitors due to the transfer of the main entrance to the side of the building on Maly Znamensky Lane.

During reconstruction the Vyazemsky manor will receive additional underground facilities for visitor services, an exhibition-lecture hall, etc., and the Gallery of Old Masters is proposed to be located there as well. A summer museum pavilion for film screenings and master classes will also be erected here (in the quarter there will be a total of three summer pavilions).

Another public space will appear in the courtyard of the Gallery of European and American Art of the 19th-20th centuries on Maly Znamenskiy Lane, and here will also be a building that will house an exposition related to the history and friends of the museum.

Modern museum buildings will appear in two areas — the western and eastern parts of the quarter. Thus, in the open space between the building of the Department of Private Collections and the six-story Stulov apartment house, the Pushkin Museum plans to build a depository (area of ​​9,000 sq m) with a restoration area (3,000 sq m) and a space for exhibitions (5,000 sq m).

The exact parameters of the construction will be determined in the architectural design; for now it is known that the first floor of this should be a through passage to provide for open circulation of visitors in the space of the educational cluster around the Museyon building and the planned public library. 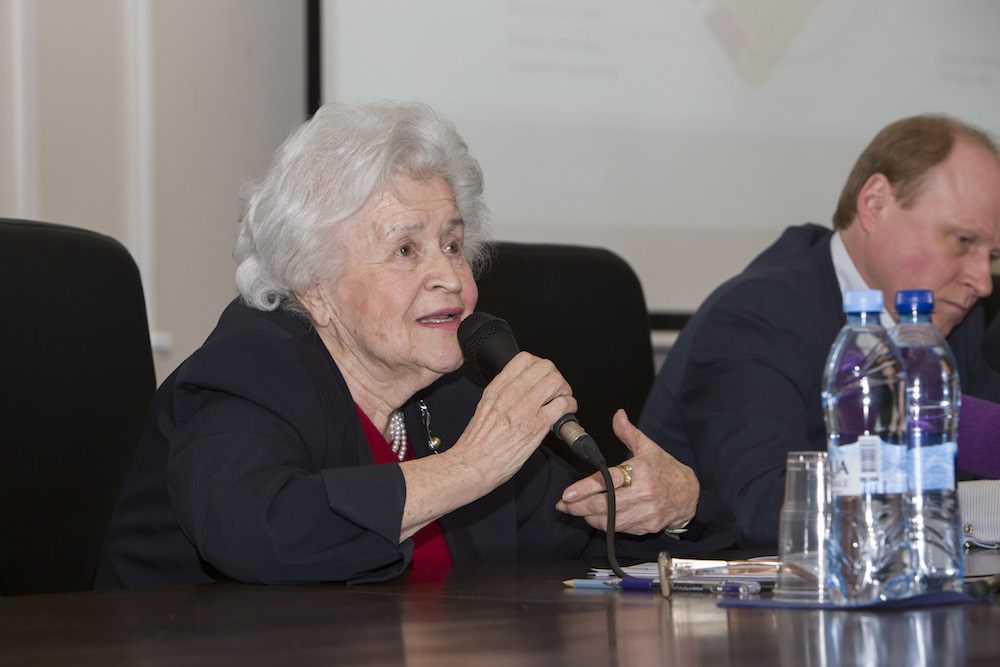 The possibility of building another site in the eastern part of the quarter is more controversial: first, because it falls into the protected zone of a monument, and there is an option to recreate on this spot the lost Golitsynsky annex, which has a retaining wall that still remains. And secondly, because of the need to transfer the old gas station. Irina Antonova, argues that the museum’s needs and these assets are irreconcilable, and insists on building a modern multifunctional auditorium of 500-600 seats, without which, according to her, no great museum in the world can do without.

However, the Pushkin Museum also has a variant in which the gas sation is left, transforming it into a new cafe. Beside it in the master plan is a design training center, a souvenir and book store, and a summer lobby of the musem quarter with ticket offices and information.

New construction also forsees a fairly extensive underground portion, including routes for underground circulation of visitors between the various buildings of the museum. In particular, a wide tunnel is suggested to connect the Vyazemsky manor to the main building, and from it make a passage to the new depository complex of three separate buildings, which in turn will be connected underground by three additional levels of space. According to Marina Lochak the active phase of construction will begin in 2015. The buildings are planned to opened in stages; during the last stage, after the construction of the depository complex, the main building will close and around 2020 all work should be completed. The director said that reconstruction will cost 22 million rubles.

Images: the Committee for Architecture