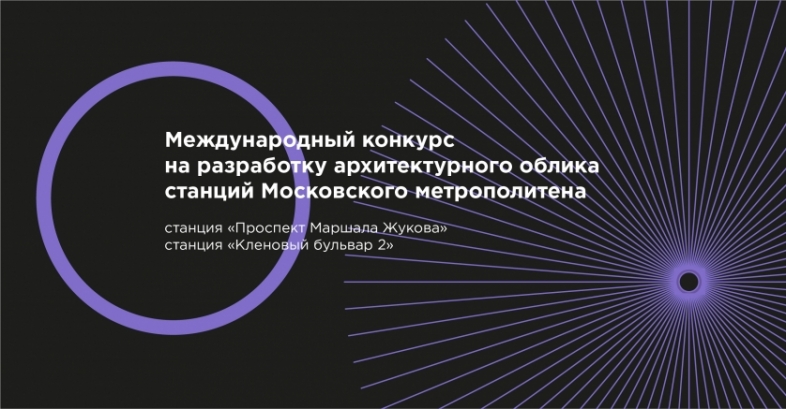 An open international competition has begun on the development of the architectural and art shape of two new metro stations - Prospekt Marshala Zhukova of the Rublevo-Arkhangelskaya line and Klenoviy Bulvar 2 of the Biryulevskaya line. This was announced by Chief Architect of Moscow Sergey Kuznetsov.

“We have serious experience in conducting competitions for the development of architectural and art concepts for metro stations, Moscow Mayor Sergey Sobyanin has always supported us in this sphere. And the results have always surpassed our expectations thanks to the talent and professionalism of the participants. Today, some of the solutions for 9 stations, which were objects for the competition, have been implemented, and it is time to announce a new competition, the fifth in a row. Russian and international teams are invited to participate, and it will not be easy to determine the winners. One thing is certain - it will be another victory for Moscow. We have many interesting promising projects aimed at improving the quality of the urban environment, transport infrastructure, and some of them are successful precisely due to such competitions,” said Sergey Kuznetsov.

According to Mr. Kuznetsov, the proposed design concepts for the stations should be harmoniously combined with the current urban planning and cultural and historical context of the location area, consistent with the spirit of the times, be technological, adapted for the movement of all categories of the population, and also have convenient navigation.

Russian and foreign architectural bureaus are invited to participate in the competition (if they have a Russian representative office or work in a consortium with a Russian partner) if they can attract designers, engineers, planners, specialists in the field of economics and financial modeling to their team.

The competition will be held in two stages. Teams need to fill out an application on the official website of the competition www.design-metro.ru before May 21 and, at the first qualifying stage, to present a portfolio of relevant projects and essays describing the key ideas for the architectural and art design of the stations. Following the results of the first qualifying stage, five finalists will be determined for each station.

The second stage is devoted to work on competitive projects. Over 1.5 months the finalists will finalize their ideas in accordance with the requirements of the expanded technical specifications, and then provide the final concepts. On August 20 the jury will determine the winning projects, which will be subsequently implemented.

Prospekt Marshala Zhukova is a transfer station connecting two metro lines, Bolshaya Koltsevaya and Rublevo-Arkhangelskaya line. The station will be located in the Khoroshevo-Mnevniki district of the North-Western Administrative District of the capital. It will be a key transit point for residents of the district. The station is located in the alignment of Ulitsa Demyana Bednogo at the intersection with Prospekt Marshala Zhukova. The station complex will be erected on the site of a deep level line. According to the project, two single-track tunnels run to the station, therefore it was designed with one island landing platform.

Klenoviy Bulvar 2 station (working name) is a transfer station, part of a transport and transfer hub formed by Bolshaya Koltsevaya line and the future Biryulevskaya line. The station will be located in the Nagatinsky Zaton area of the Southern Administrative District of Moscow. In addition to the obvious transport and logistics benefits for residents of Nagatinsky Zaton district, the station will provide the necessary integration of the Kuryanovo and Biryulyovo districts, as well as convenient access to the Kolomenskoye Museum-Reserve. The station will be located in the Klenoviy Bulvar alignment at the intersection with Kolomenskaya Ulitsa. The station complex will be erected on the shallow section of the line. According to the project, two single-track tunnels run to the station, so was designed with one island landing platform.