Technology park of “Sberbank” in Skolkovo will be built upon the project of Zaha Hadid Architects. 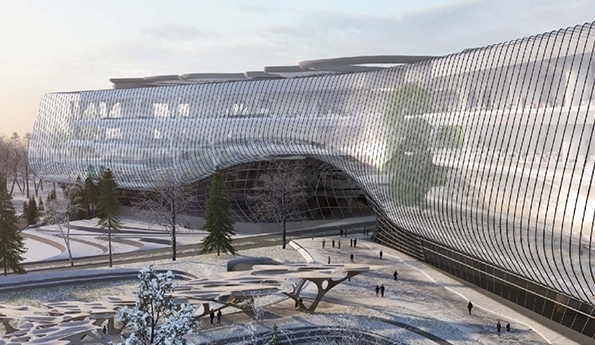 On April 20 in Moscow, the jury of the international contest for Sberbank Technology park concept held a meeting with presentations of the bidders. Following the results of the meeting a rating of concepts and the winner of the tender bid ZAHA HADID ARCHITECTS (Great Britain) were determined.

The new building of the technology park by Sberbank, PJSC will be a landmark of “Skolkovo” Innovation Centre and one of the unique architectural structures of the city. The concept was presented to Sergey Sobyanin, the mayor of Moscow.

“We used the good practices of the modern architecture to create a unique structure, — says German Gref, the President, Chairman of the Executive Board of Sberbank. — Sberbank Technology park is destined to become a major hub of corporate competence and an innovation driver in IT-technologies”.

“Zaha Hadid concept is a new format ofIT-technology park from the perspective of architecture, — says Sergey Kuznetsov. —These will be unusual for us large light premises with „free“ layout, and a so-called „deep„ office, enabling bank officers to work over the project in the format of small groups consisting of 4-5 people who are at the same time a part of the big team of 100 and more people and in need of an ongoing communication“.

According to Kuznetsov, unconditionally, a personality of the architect would play a special part in this project — Sberbank technological park became the last work of late Zaha Hadid. „That is a splendid opportunity to get a luxurious object for Moscow, — says Sergey Kuznetsov. — A support for the bidding practice from the side of the mayor Sergey Sobyanin, who saw the technological park concept today, enables the city architecture to catch up with the global level“.

The representative of „ZAHA HADID ARCHITECTS“ company — Project Director Christos Passas presented a developed design proposal in presence of the press-conference participants: „Our concept is to review and enhance the fundamentally modernistic method of creation of workspaces, which used to be an all-purpose option up to the moment. We see the new possibilities in elimination and transformation of modular components with simplistic geometry, the renewed and absolute access to the light and territories, involving to the maximum the fresh air into the working environment“.

Zaha Hadid Bureau will be involved in the project modification by „architectural solutions“ and „design concept“ and also as a consultant in the implementation phase.

Building design could take approximately a year. As previously noted by German Gref, the President, Chairman of the Executive Board of Sberbank, the construction would take not less than two years.

The Customer: Sberbank of Russia, PJSC

Tender bid authority: Genplan Institute of Moscow with the support of Moscomarchitecture.