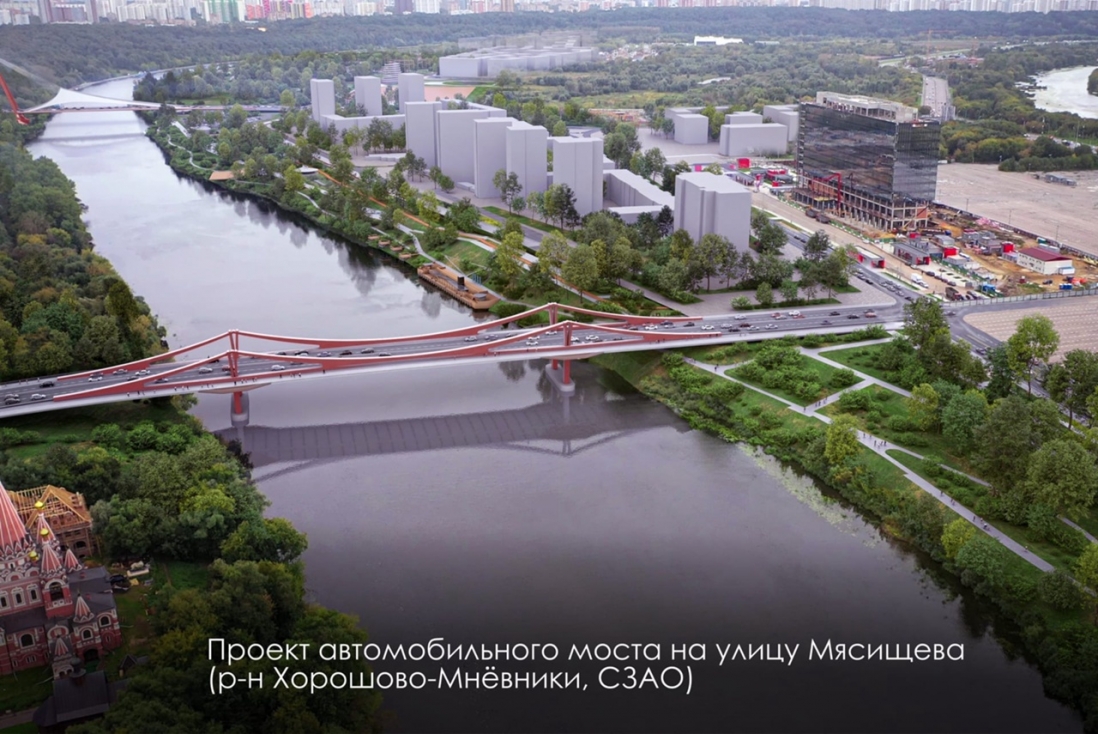 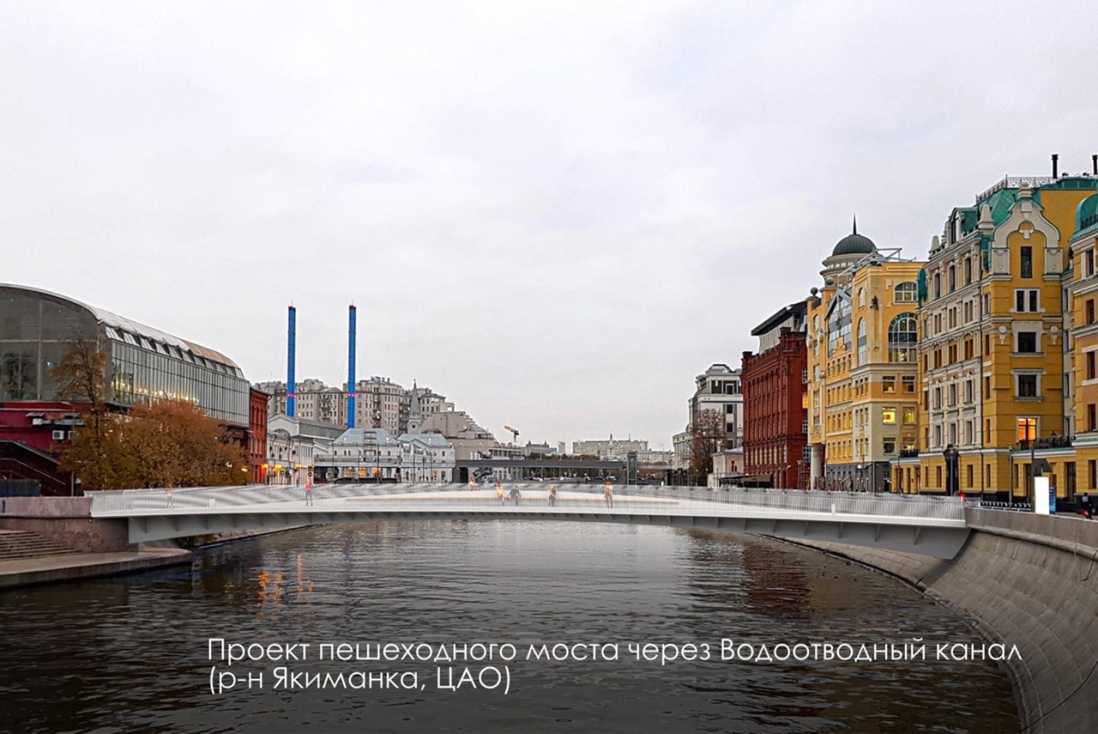 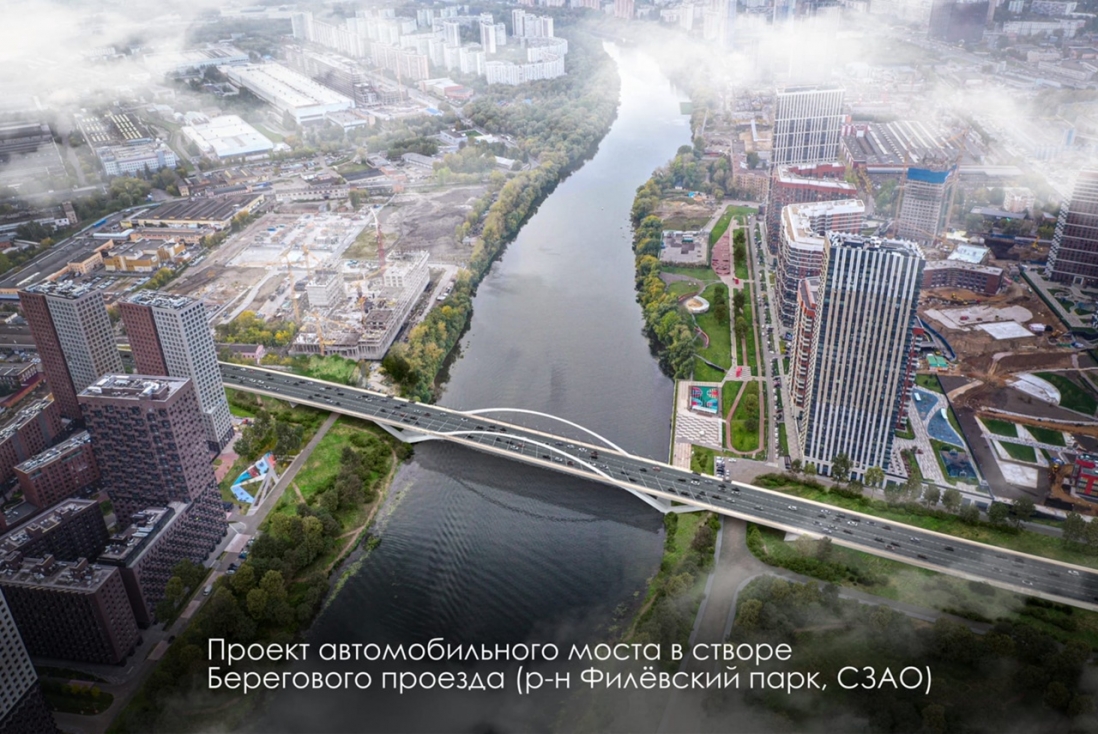 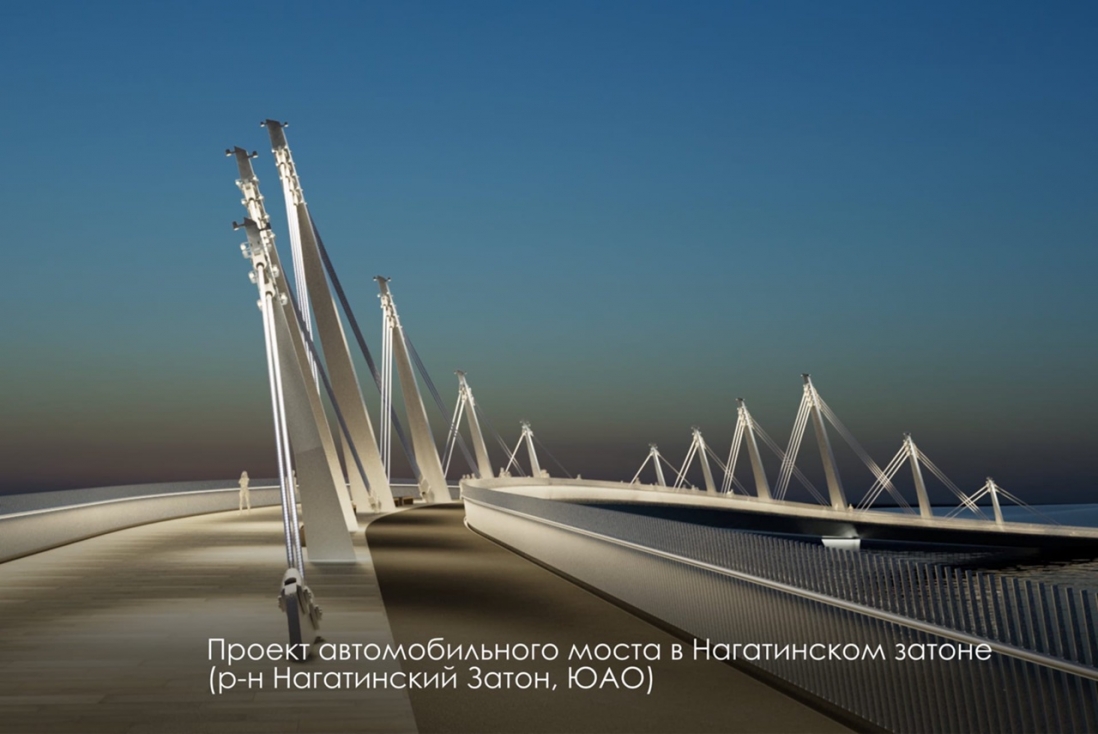 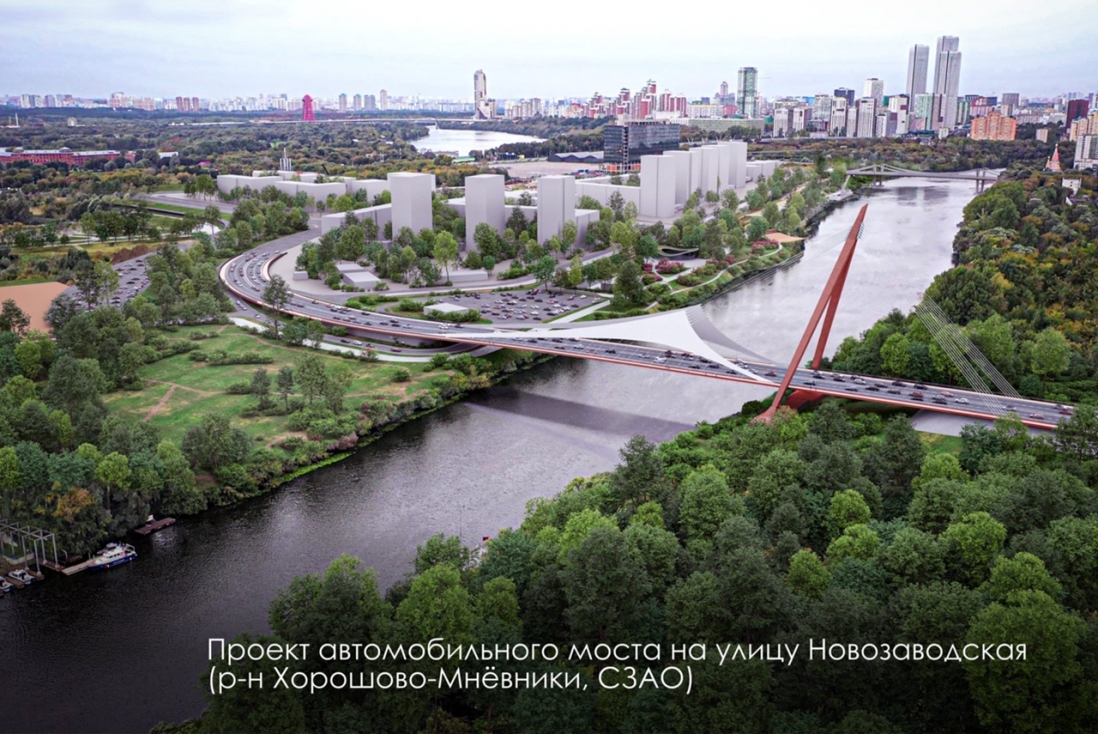 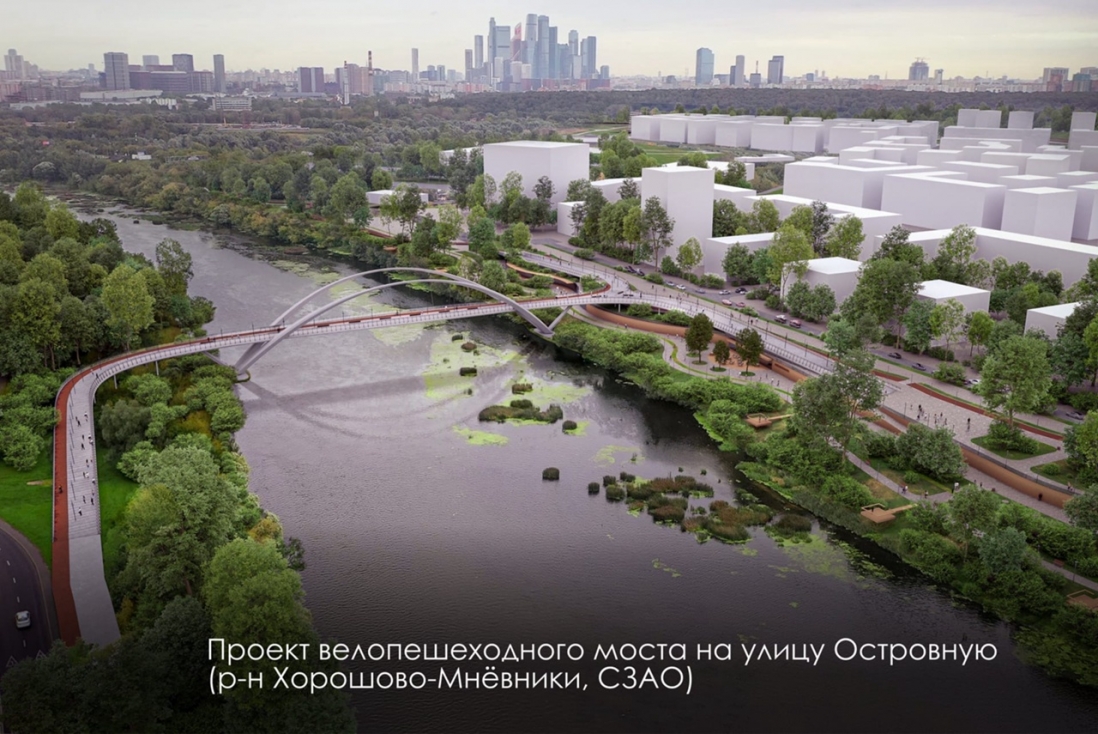 Moscow Committee for Architecture has prepared architectural concepts for seven bridges that could become new symbols of the city. Four of them will be located in the actively developing area of Khoroshyovo-Mnevniki, three more across the Moskva River — in the south, northwest and in the center.

Moscow Government has engaged international consortiums to work on the projects. In Khoroshoyvo-Mnevniki, it is planned to build two bicycle bridges on Ostrovnaya Street and towards Fili Park, and two more automobile bridges on Novozavodskaya and Myasishcheva Streets.

«A distinctive feature of each bridge in Khoroshoyvo-Mnevniki will be the presence of red elements. As Mayor Sergey Sobyanin said, bright images are designed not only to become a hallmark of the developed territory, but also to form new inter-district ties. For example, from Filyovsky Park District, it will now be possible to quickly get to the Mnevniki metro station, which was requested by local residents. All pedestrian bridges will be comfortable for the movement of people with limited mobility,» said Sergey Kuznetsov, Chief Architect of Moscow, First Deputy Chairman of Moscow Architecture Committee.

The bridges will connect Khoroshyovo-Mnevniki districts, Filyovskaya Poima and Filyovsky Park microdistricts, the territory of Mnevnikovskaya Poima with Krylatskoye district and the Rowing Canal. Now 40 thousand people live within a 15-minute accessibility. At the same time, the population will grow due to the construction of housing under the renovation program on the territory of M. V. Khrunichev GKNPT industrial zone, where the National Space Center and Technopark are also being built.

«Each object turned out to be unique, take at least the „sail“- the bridge to Novozavodskaya Street with a length of about 250 meters. It will have only one pylon and a small height for this type of structures, and the frame that holds the roadbed has no analogues in the world at all. The design symbolizes the image of a galliot* (*a sailing ship), moving from one area to another. Night architectural lighting will enhance the expressiveness of the bridge and make the territory of Mnevnikovskaya Poima recognizable. The car crossing on Myasishcheva Street looks the most classic,» Sergey Kuznetsov said.

The bridge to Ostrovnaya Street, which is within a ten-minute walk from the Terekhovo metro station, has an unusual shape of round arches. The bridge will connect the territory of Mnevnikovskaya Poima with Krylatskoye District and the Rowing Canal. Graceful sloping arches, forming a kind of «gateway» to Mnevnikovsky Island, will form the basis of a new recreational route. The cycling and pedestrian bridge towards Fili Park resembles a «thread in the needle», so weightless it turned out to be. Despite the apparent fragility, it will perfectly cope with its mission — it will complete the creation of a walking route between Mnevniki and Fili parks. It will be located 700 meters from the Terekhovo metro station. In addition to crossings in Khoroshoyvo-Mnevniki, they will build an automobile bridge in the alignment of Beregovoy Passage, in Filyovsky Park District, and two more pedestrian bridges — in Nagatinsky Zaton and across the Vodootvodny Canal in Yakimanka District.

Sergey Kuznetsov: «In Nagatinskiy Zaton, the bridge will increase the accessibility of the BCL station with the same name. The 240-meter-long crescent-shaped structure will be complemented by sharp steel masts, rising from the water like ice peaks. Warm architectural lighting will soften them. Separately, I would like to note a new crossing to the island of Balchug — people have been waiting for it for a very long time, but finally everyone will be comfortable, you can get to the recently opened GES-2 Museum faster»

The bridge over the Vodootvodny Canal will become a connecting element for one of the main tourist routes of the city. Its dimensions allow more than 4000 people per hour to pass. An engineering solution in the form of a curved metal beam, penetrating the footbridge’s canvas, makes it possible to achieve elegance and lightness of the structure. The beam itself, on the one hand, serves as a dividing strip for the flow of cyclists and pedestrians, on the other hand, it will be used as a bench. The six-lane automobile bridge at the alignments of Beregovoy and Prichachny passages will connect the rapidly developing territories of Shelepikha and Filevsky Park districts and will become an important transport artery.

For the convenience of citizens, a pedestrian zone is provided on one side of the bridge, and a bicycle lane on the other. Pedestrians will be able to go down here to the landscaped embankment. Work on the projects was performed by: Mosinzhproekt JSC; TPO PRIDE; Leinhardt, Andra and Partner (Germany); Wilkinson Eyre Architects (England); Shlaich Bergerman and Partners (Germany); Intermost; Citymakers; Spector LAB; «A-Project».