LUKOIL Headquarters is Crowned by a Light Cube 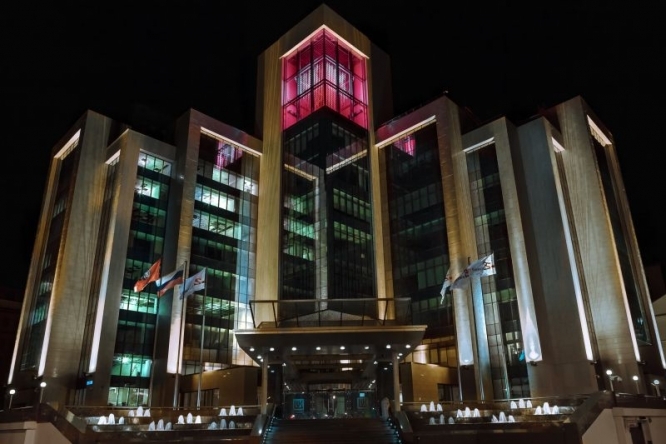 The LIGHT CUBE art object appeared on the façade of LUKOIL head office in the center of Moscow. The project was developed by Ekaterinburg designers. The Company determined the project authors as a result of the open competition that was held in 2014 with support of the Moscow City Committee for Architecture and Urban Planning.

More than 90 projects were presented at the competition, from various countries, including the well-known international companies. The art concept by the lighting designer Natalia Koptseva and lighting technician Vasily Tarasenko from Ekaterinburg won the competition. Their Light Cube Installation is a three-dimensional block of individually controlled LED modules which can reproduce various dynamic and static 3D-images, so the choice of installation subject depends only on the customer’s imagination. The Light Cube is rather impressive in size — 5.7 × 5.7 × 12 meters. It is installed on top of the Company’s headquarters, at 11 Sretensky Boulevard, glowing in the center of the square like a lighthouse.

‘I think this project is the strongest. Firstly, it is clear, simple and at the same time very effective technology with great potential. Secondly, a lighthouse is a good representation which corresponds to the architectural design of the building, and the Company’s image,’ said Sergey Kuznetsov, Chief Architect of Moscow and Chairman of the jury. ‘I am glad to say that the city government and personally Mayor Sergei Sobyanin offer a lot of opportunities for young architects when supporting competitions like these.’ Natalia Koptseva interprets her project as follows: ‘The Light Cube can represent a lot of things, but first of all, it is a direct association with the Company‘s brand. It is also a symbol of the flame of an oil rig and check-point — the start or end point of the route. As a symbol of a lighthouse it represents the center of attraction of attention and business flows. Our fast moving world contains a great variety of information flows and images that surround us everywhere. Our goal is to produce the quick, correct and positive impression on the observers by means of a simple image, also to create brand-enhancing effect, increasing loyalty to the Company through the socially-oriented product with clear perception and visual identity. The Cube image can create different associations, but one way or another, these associations will be linked to the Company’s activity, its status and significance.’

Natalia and Vasily have been working in the field of lighting design for about 10 years. They give lectures at the Moscow School of Architecture (MARCH) and support creative initiatives of the Ural Design Development Center.