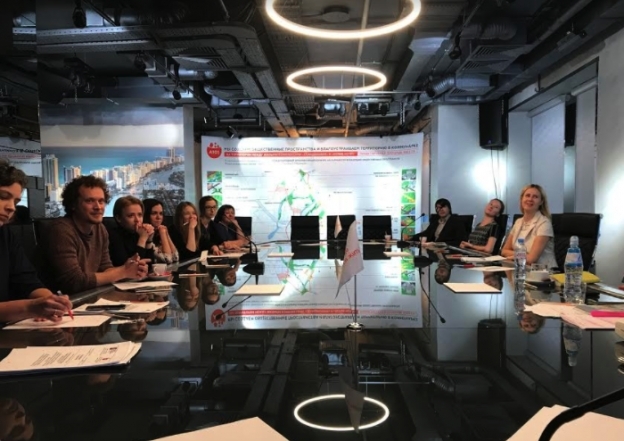 There was a working meeting of the contestants that got to the second stage of the open international architectural competition for the best conceptual project for the complex of public urban spaces in New Moscow.

The working meeting of the competition organizers, represented by Moskomarchitektura, A101 Group of Companies, which is included in SAFMAR Industrial and Financial Group, and the organizing committee with the contestants was held as a closed workshop, where they reviewed in more detail the objectives to be achieved, and all competition participants were provided with information on the further work regulation.

According to Viktoriya Raubo, representative of Moskomarchitektura’s Management Office for the General Plan of Moscow, in order to meet the targeted objective, it is necessary to create a public zone that will not become less relevant for residents in the next 15-20 years, taking into account the long-term prospects for the location development.

The meeting participants discussed in detail the territorial and city planning conditions for the implementation of future concepts with consideration of the rich natural potential of the territory and its specific features in the area of the planned works, as well as positioning of A101 housing compounds located near the territory in the context of orientation towards a "family" buyer.

"The active demand of the city and investors for public spaces projects proves that residents of Moscow, and not only of New Moscow, really want to live in a comfortable, well-laid-out and multifunctional environment. The competition projects imply that such spaces begin kind of directly from the yard of the house which is integrated into a chain of connected boulevards. The pool of the strongest architects who submitted applications for participation in this competition can clearly demonstrate what a high-quality public space should be like and what basis is essential to be laid in the scenario of its life," said the Chief Architect of Moscow Sergey Kuznetsov.

"A face-to-face meeting in this format is not just a useful expert procedure, but it is also an opportunity to get personal feedback from the contestants and see their genuine interest. We become the direct moderators of public spaces formation in development projects, their integration and harmonization, not only for mere urban improvement, but also to make them multifunctional and universal, considering to the maximum extent the interests of residents and businesses," the Development Strategy Director at Group A101 Leonard Blinov shared his impressions of the meeting.

Let us recall that all the contestants working to develop the competition proposals have concluded agreements with the organizing committee, pursuant to which the contestants shall perform the specified amount of work on a reimbursable basis. After voting on the results of the proposals submitted, only three participants will be selected. The winner of the final voting will obtain an exclusive agreement for implementation of the competition concept.