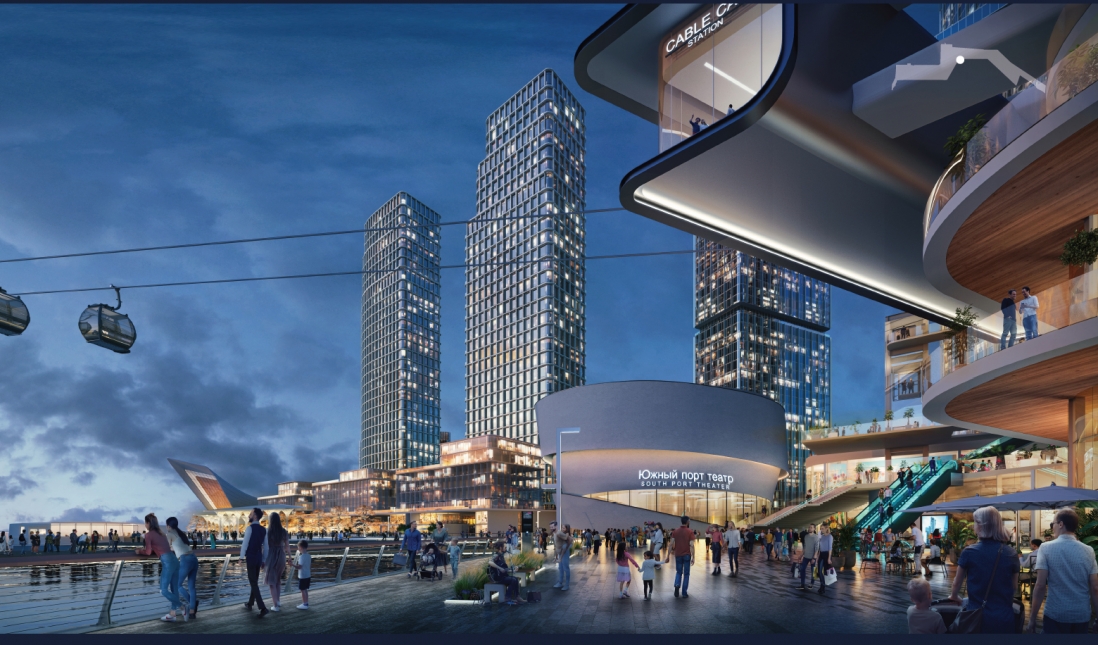 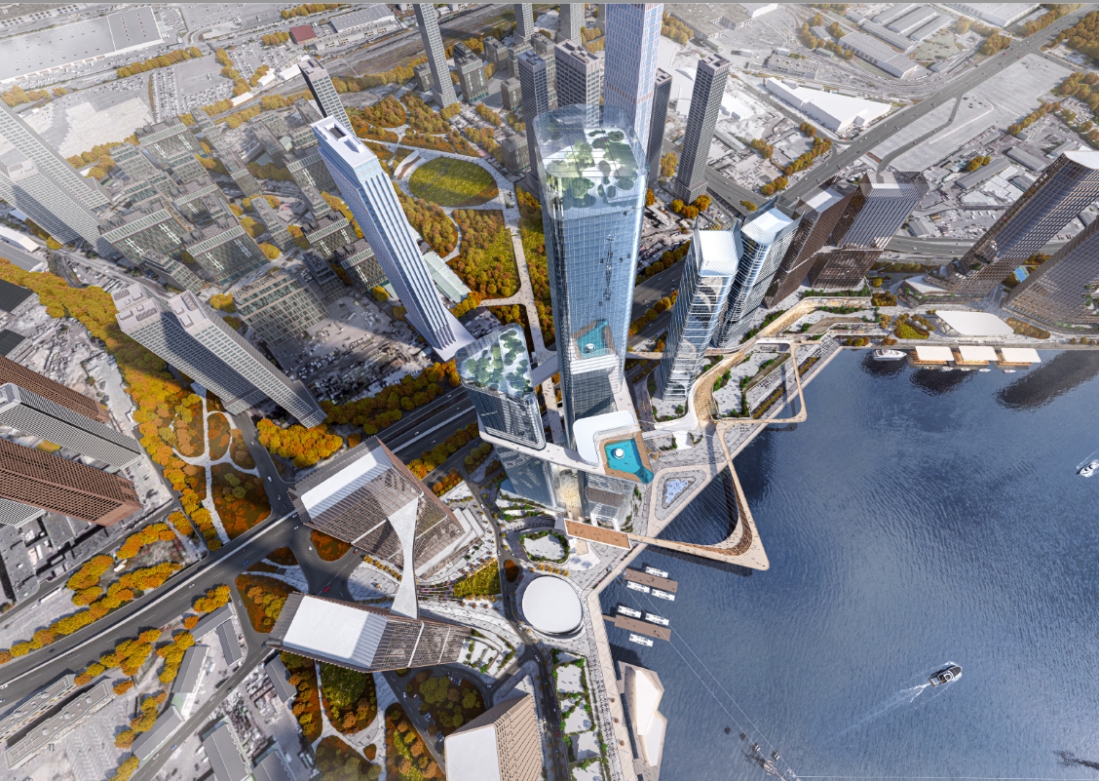 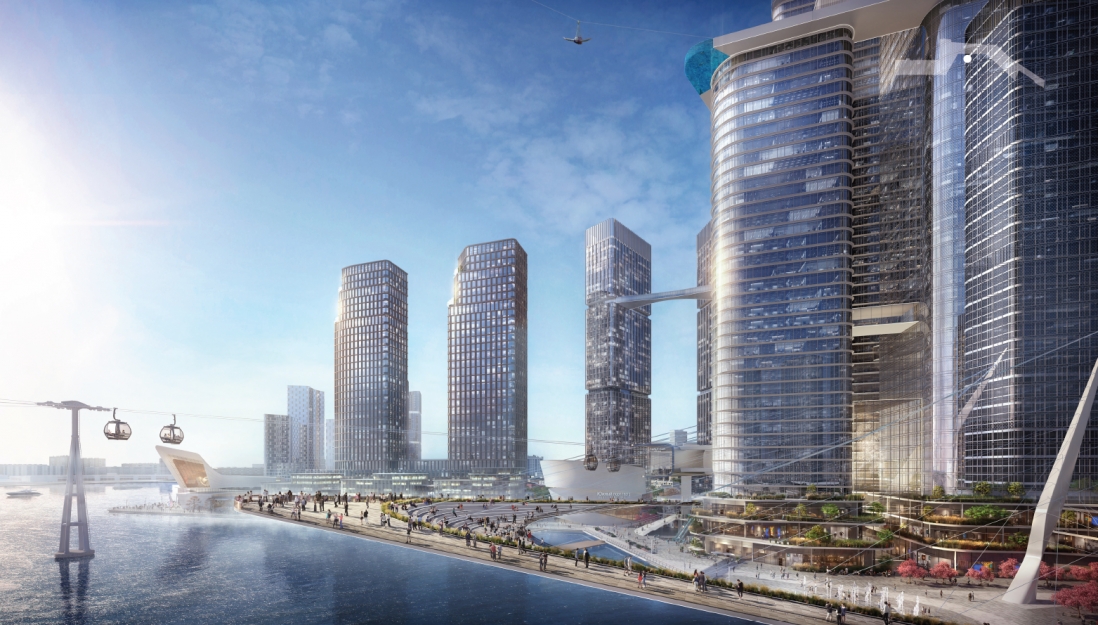 The international architectural competition for the best project for the development of Yuzhny Port territory organized by AEON Corporation and Ferro-Story is over. Nikken Sekkei architectural bureau has proposed to build almost 1.5 million square meters of real estate, including a 350-meter skyscraper, a theater, two art centers, a floating restaurant, covered avenues, a glass atrium, ferry and yacht terminals. Chief Architect of Moscow Sergey Kuznetsov spoke about this.

Also, Yuzhny Port will have a central plaza, an esplanade, sports and public parks. Architectural bureau RTDA was the operator of the competition. «Investors treated this site very responsibly, worked in constant contact with the city» — commented Sergey Kuznetsov. — After the concept of development of this territory was agreed upon by the mayor of Moscow, a serious, very professional competition was held with architectural teams of the first magnitude. The choice was difficult, after the first stage the three finalists, having received the jury’s comments, worked on the project for another month. As a result, Nikken Sekkei coped with the task brilliantly, it is in accordance with their concept that this territory, which is most important in terms of urban planning, will develop in the future, and I am convinced that this is a huge step forward for our capital. "

The first stage involved five consortia of architectural firms from around the world, of which three went to the second stage: Nikken Sekkei (Japan), PLP Architecture (Great Britain) and Zaha Hadid Architects (Great Britain). According to the results of the competition, the jury chaired by Chief Architect of Moscow Sergey Kuznetsov chose the concept of Japanese architects from Nikken Sekkei as the winner. According to the experts, the winning project highlights the architectural expressiveness and attention to the details of the improvement; it also takes into account the basic principles of the development of such a significant territory:

Yuzhny Port project will complement the Moscow skyline mainly with high-rise buildings of different heights. Sixteen residential towers (from 90 to 200 meters high), four towers of the apart-hotel and one office skyscraper 350 meters high will be built along the river. The first floors and stylobates of buildings will be occupied mainly by trade, as well as social institutions, business life will be concentrated in an office skyscraper, and all other high-rise buildings will become premium-class housing.

The green area of Yuzhny Port will be formed by five parks, walking areas near the river and the art center, central, welcoming and art plazas, an open amphitheater, a floating stage and a sakura street.

How Yuzhny Port will be arranged

In the center of the new district there will be the «city gate» with a world-class transport and interchange hub, which will turn Yuzhny River Port into a new point of attraction for business and social activity in Moscow. It is here that a 350-meter office skyscraper will rise, at the base of which a multi-storey glass atrium will be provided. Under its vaults there will be a transport hub with access to land transport stops, taxis and bicycle routes, a ferry pier and a cable way. The skyscraper will be connected to the two towers of the apart-hotel with a height of 250 and 180 meters by a huge observation deck at a height of 180 meters. In addition to the observation deck itself, they will construct a pool with a glass bottom, as well as a cable way (zipline). The roofs of the skyscraper and the second tower of the apart-hotel will be crowned with glazed celestial gardens at a height of 350 and 280 meters, respectively.

The high-rise complex with TIH and apart-hotels will become the intersection point of the two main axes of the quarter and the long embankment. The first axis will connect the central park, the cultural and museum zone and the embankment. In the central park there will be areas for barbecues, picnics, an open-air cinema, areas for music festivals, ponds for boating.

The cultural and museum zone will unite the theater and the museum of modern art, between which there will be a sakura street along the river, a floating stage and another arts center. Sakura Street ends with a turn to a section of the embankment, a sculpture garden, a public park and a yacht club. Street trade and markets will appear in the open spaces of the cultural and museum zone. If you go back along the street to the central high-rise complex, then on the section of the embankment opposite it you can find a huge amphitheater and a suspended pedestrian bridge over the river.

The second axis starts at TIH and develops into another section of the embankment, which will include a covered avenue, a recreation park, a floating restaurant, a sports park, a spa area and a river pool.

Main ideas of the project

Architects from Nikken Sekkei pursued several goals when drawing up the concept for Yuzhny Port development. First of all, they wanted to turn the transport hub into a new point of attraction for Muscovites, to make the TIH a new significant place both from a substantive point of view (adding an office complex, apart-hotels and an atrium), and from an aesthetic point of view, giving the complex a height, observation function and notable sights at its foot — a floating bridge and an amphitheater. The axial walking routes also help to achieve this goal.

The second idea is to give the river line back to the city-dwellers. An embankment runs along the entire block, where trade, cultural life, educational and creative activities will take place. They will «revive» the space that used to be either empty or industrial.

The third idea is to return the lost natural resource of the territory of Yuzhny Port, to preserve and activate it. For this, a huge central park is being designed here, as well as functional satellite parks with a sports, cultural and leisure focus are being set up at different points. The idea of preserving the biodiversity of the territory is emphasized by raising two gardens to a bird’s eye view on the roofs of the two tallest buildings in the quarter.

«The renovated Yuzhny Port will become a new hallmark of Moscow and set a high standard for new development projects of this scale in the capital» — says Dmitry Starostin, Vice President of AEON Corporation. — Most likely, it will become a new, more modern center of city life along with the historical streets of the Central Administrative District, Moscow City and the southwest. At the same time, we believe that the implementation of the project will significantly increase the prestige of the southeastern direction, the quality of life in these districts of Moscow, and it will stimulate developers working in other former industrial zones nearby to meet our declared level. Also, construction on the territory of Yuzhny Port will intensify the development of other areas near the Moskva River, where many prestigious housing will appear on the river’s first line«.

«Yuzhny Port will be competently integrated into the urban fabric of the capital» — comments Grigory Vaulin, General Director of Ferro-Stroy Group of Companies.— TIH and a huge office and hotel complex will certainly attract many tenants and investors here. The powerful aesthetic message, the infrastructure of culture and entertainment provided for in the project will attract here residents of the capital from other parts of the city, tourists from Russia and other countries. This creates the preconditions for high attractiveness of investments in Yuzhny Port".