Bidding process in the competition for renovation site concepts has started 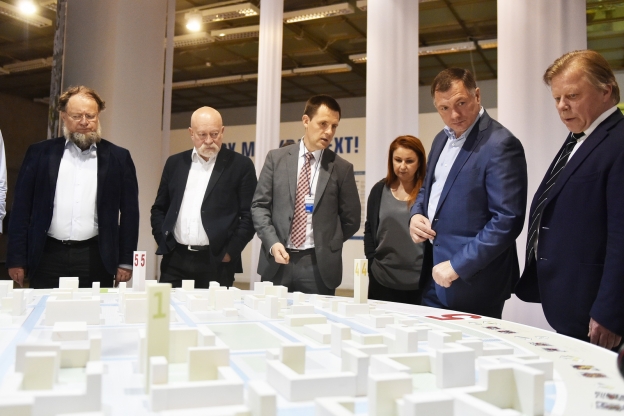 Bidding process in the open competition for concepts of renovation blocks has started —Chief Architect of Moscow Sergey Kuznetsov announced it at the international architecture and design exhibition ARCH Moscow NEXT!

Moskomarkhitektura announced the launch of the bidding process for the open architectural and town-planning competition for the development of the concepts of five experimental renovation sites in Moscow. Russian and international companies, architectural and design studios are invited to participate. Foreign offices need to have a Moscow partner or a project office in Moscow.

To make a bid, the teams need to go to the official page of the competition: the Archconcil of Moscow and fill out the registration form.

The specification of the competition, according to Kuznetsov, will be formed within a month, in particular, taking into account the proposals made by Russian and international architects and experts at the round table Renovation Principles: Creation of a Comfortable Living Environment held within the framework of the International Exhibition ARCH Moscow NEXT! on May 24.

Marat Khusnullin, Deputy Mayor of Moscow on Urban Development Policy and Construction, said that more than 500 blocks in Moscow will be included in the renovation program, based on the wishes of the residents. ‘This is a n extremely complicated task that will require mobilizing all the available resources not only in our country, but also around the world. We hope that many foreign architects and city planners will also be willing to take part in this initiative. The work is planned for the next 15-20 years. With the today’s event, we start the discussion of the bid specifications for five starting sites for renovation. The discussion must be completely open,’ said Khusnullin.

‘On April 25, we announced the start of the bidding procedure and invited the architects to begin preparing their bids. Since May 24, we are beginning to accept these bids. This process will take a month. It partially coincides with the period of voting on the sites, so specific design will be allocated later, — said Sergei Kuznetsov. — The Moscow Mayor supports our initiative.’

The Chief Architect emphasized that the task of the competition is to create a comprehensive environment for life. Moskomarkhitektura has done a great job on the development of town-planning regulations and housing construction standards, as well as design and planning documentation, improvement of streets, embankments, and public areas. This experience will undoubtedly be used in the design of new blocks of renovation.

‘When we started, we carried out a large analysis of the areas with panel construction, found out where people are happy with their habitat, and where they aren’t. In general, we can say that the Soviet system of microdistrict planning, unfortunately, does not justify the hopes placed on it in terms of ergonomics and rationality, it cannot catch up with the pace of life in large cities.

In a microdistrict, there are huge courtyard spaces lacking internal streets and the buildings themselves are huge, even the entrances of multi-storey residential buildings are not seen as a private space

In the block pattern we can create a quiet courtyard and an orderly parking space. It also creates a natural boundary between the street and the courtyard, so you do not need to erect fences. All tenants know their neighbors, and the key role is played not by the density of the population but by the organization of space. In new areas of renovation, we will maintain a density of 25 thousand square meters per hectare, which will ensure a comfortable urban environment. Our colleagues from BRT RUS prepared a model of the average weighted area of ​​renovation, and we are inviting all experts, architects, and city planners to submit their proposals to make sure that all our blocks are different,’ said Kuznetsov.

The principle of blocks allows to effectively use the area, zoning the courtyard and public territory by the buildings rather than fences.

There is no place for ‘random’ in a block. Public spaces, sports cores, new buildings with commercial first floors: these things should be laid in the early design phase

‘I’m asking all bidding architects to take this factor into account. Besides, we need an option when several buildings in the block won’t want to participate in the renovation program, while their neighbors will. We need to think about how to maximally fit them into the new project,’ said the Chief Architect.

‘Today, the big defect of microdistricts is the lack of parking lots, that’s why often we have streets chaotically packed with cars. We analyzed several districts using aerial photography, and looked at how many cars were parked. On average, the number was roughly 1300 car spaces. When broken down into a block grid, we get twice as many parking spots: 2,300 organized flat areas. In addition, the city undertakes to make underground parking lots on the underground floors of the buildings. It is a big bonus for those who will live in these areas after renovation,’ explains Kuznetsov.

The housing in the pilot blocks, according to the estimates of Moskomarkhitectura, will cover approximately 42% of the area, the street&road infrastructure — 11%, and the social function — 12%

Alexey Novikov, the Dean of the Graduate School of Urban Studies at the Higher School of Economics, said, ‘The renovation project is extremely important for us, but there are a lot of nuances here, for example, legal support for the program, the compensation mechanisms, and the pace of the projects. Acceleration of the program might significantly distort the structure of the city, based on the calculation of transport provision and the current values ​​of people, therefore, in this case, it is necessary to adhere to the concept of an ‘adaptive’ city. From the economic point of view, we must rely on the «location» rather than the «series», it is the location that makes up a significant share in the real estate rating. The ratio of residential and commercial segment should be calculated very carefully. In our opinion, some blocks might need malls in order to create a polycentric city.’

During the round table, the examples of implemented projects of the previous renovation stage in Moscow and foreign experience were also discussed.