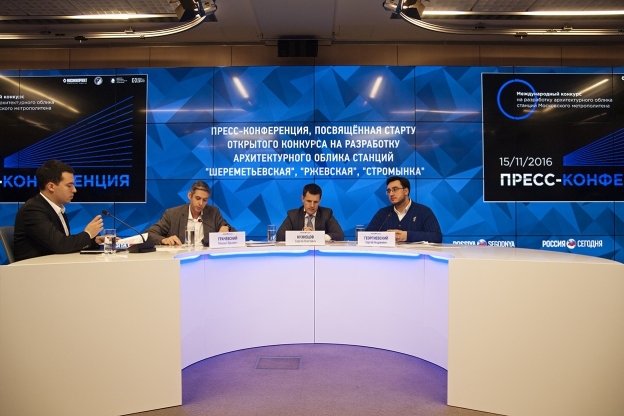 Chief Architect of Moscow Sergey Kuznetsov declared the Bid to design three underground stations open. The bidders need to find the best architectural and artistic solution for the interiors of the passenger areas and the entry pavilions of ‘Sheremetyevskaya’, ‘Rzhevskaya’ and ‘Stromynka’ Underground Stations with special attention paid to materials, lighting and non-bearing structures of the stations.

The task is to harmoniously fuse the artistic solutions of the stations with urban development, historical and cultural contexts of location areas. In the interiors, the preference should be given to modern, environmentally friendly and durable materials. At the same time, the requirements of comfortable and safe traffic for all society categories are to be observed. In addition, a smart navigation is necessary. “At the level of the Government of Moscow there is a fundamental decision backed by the Mayor Sergey Sobyanin and the Head of the Moscow Construction Complex Marat Khusnullin, on regular bids for new underground stations, — says Sergey Kuznetsov. — The metro is the most visited site in the city, its passenger traffic per day is 9 million people. It is the architecture that the highest number of people see, so, it is very important to keep up with the standards and the traditions. This bid is the flagship of high-quality projects, as well as an opportunity to raise the overall level of the architecture we would like to have in our capital.”

In the first qualifying stage, the bidders will need to present their proposal, a portfolio and an essay describing the key ideas of the future bidding concepts for each underground station. Bidding deadline is December 15, 2016.

In the second stage, based on the bidding essays for each of the three underground stations five finalists will be selected — they will develop bidding concepts. The Jury will meet on January 24, 2017. Each finalist will be awarded RUB 400,000 inclusive of all taxes and fees. A contract for the project development will be signed with each winner. The bid results will be announced on April 4, 2017. Sergey Kuznetsov: “I am glad that Moscow has returned to the idea of ​​architectural bids to develop underground facilities and for has been launching them for new stations three years in a row. Before our eyes, comes a fundamentally new image of the underground: a more dynamic, vibrant, however, not as monumental as before, but certainly very interesting. Reviving the bidding practices, which in 1930 produced many brilliant design solutions for stations, the Moscow underground preserves its status of a unique architectural ensemble.”

According to Sergey Kuznetsov, the implementation of the bidding project will not be much different in price than the standard practices for the stations. “The important thing is the intellectual capital and an unexpected architectural solution that we can get from different design studios and young architects who take an active part in our bids.”

The station has 1 hall at 5 Maryinoy Roshchi lane connected with an escalator tunnel to the platform. The Eastern end leads to the interchange to Maryina Roshcha station of Lyublinsko-Dmitrovskaya Line.

The nearest to the Kremlin station of the Third Interchange Contour and the only station in the Central Administrative District of Moscow. The station has one hall with an exit to the public garden at Rizhskaya railway station from the Western side of the station; The Eastern end leads to the interchange to Rizhskaya station.

The bid initiator — Moscow Engineering project — with support from the Government of Moscow and with participation of Chief Architect of Moscow Sergey Kuznetsov. The Bid operator — Agency for Strategic Development ‘CENTER’.

Russian and international teams of experts in architecture, design, engineering, urban planning, economy and finance can bid. To participate in the big one needs to apply by December 15 at the official bid website www.design-metro.ru.