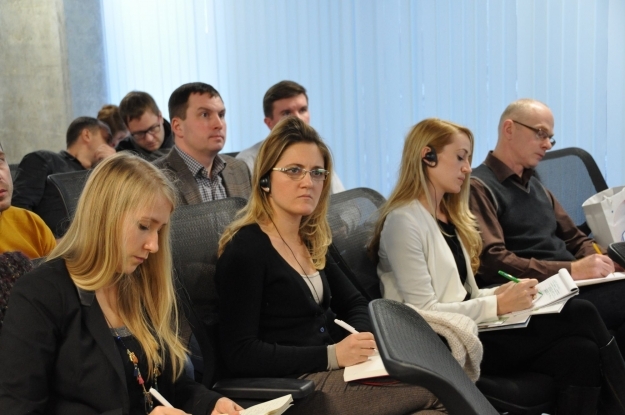 PJSC “Sberbank of Russia” took a decision to hold an international registered competition on functional and architectural concept of the new IT building of Technopark Sberbank.

The new building of the Technology Park is intended to become an icon of the Innovation centre “SKOLKOVO” and one of the unique architectural sites of the capital. The object of designing a total area of 131 505 sqm will be located on the territory of the “SKOLKOVO” innovation centre on a land area of 7.83 acres. On 17-18 December, a seminar was held, in which participants visited the “SKOLKOVO” innovation centre and the site design, met with experts and the client for a detailed discussion of the goals and objectives of the project.

The chief architect of Moscow Sergey Kuznetsov welcomed the participants: “The Territory of SKOLKOVO, outside of the historic centre, offers designers unlimited freedom for creative search and creation of future architecture. This is an exact place where we are able to apply the advanced achievements of modern architecture and create a unique object that will become another symbol of the capital”.

On December 18 in the framework of the second meeting in NIiPI General Plan of Moscow, the participants discussed the details of the technical specification, regulatory requirements and functional component of the future complex. In particular, contestants had questions about the production design layout: in the specification the size is specified in the scale of 1:100 or 1:200. However, such a detailed layout is too bulky and can cause difficulties during transportation of foreign colleagues. The customer is asked for further elaboration on this issue.

During the discussion, Kuznetsov noticed: “Originally there was an idea to create a „reserve„ of interesting and colorful architecture in SKOLKOVO. And the customer of the project had put in front of the participants of the competition an ambitious goal — to make a unique object, a symbol of the company that would stand out from other buildings. However, architects should remember that the customer has to deal with finances, so the project has to be approached from the point of view of economic efficiency very carefully. This is one of the most important parameters,“ explained the chief architect.

As the Deputy Chairman of OAO „Sberbank of Russia“ Stanislav Kuznetsov has told, the center of the functional model of the project is the „Bank of the future“: “We don’t know yet what will it look like. But we can be pretty sure that there will be many devices of self-service banking, cause it is gradually transformed into digital, and it’s is all you need to consider. In the future we need to have a strong competitive platform, so in addition to traditional conference rooms, catering and leisure, sports etc, it’s necessary to provide an area to discuss business ideas. Also in our „Bank of the future„ should be a laboratory where we can create new interfaces for apps, test new technologies. As for the office part, we want to build only open spaces. Otherwise, we rely on architects experience and creativity“.

The jury will gather on April 19, 2016 to view personal presentations of participants and for voting. Following the meeting by ranking the concepts and making recommendations for the Customer will be determined in order to further the adoption of the decision on the implementation one of the five projects. The author of the concept selected for implementation will be drawn on completion of the project in sections „architectural decisions“ and „constructive decisions“, and also as a consultant in the implementation phase.