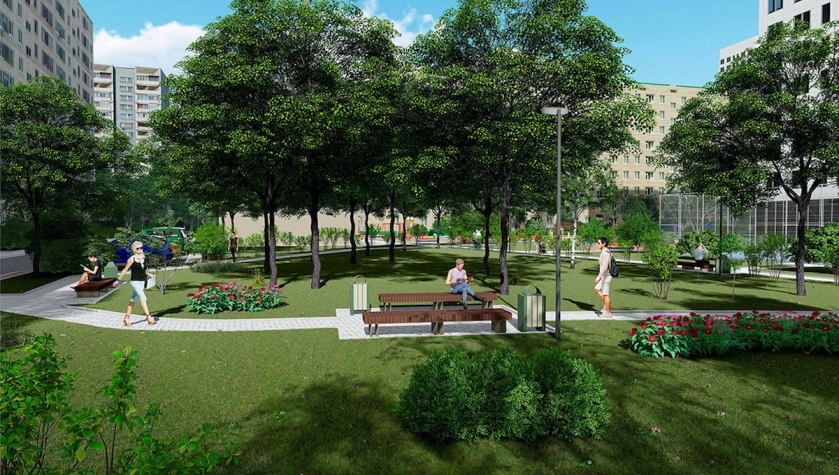 It is planned to create walking pedestrian zones and cycling lanes with a length of 3.4 km in the Ostankinsky district within the framework of the renovation program, as stated by Chief Architect of Moscow, First Deputy of Chairman of Moskomarkhitektura Sergey Kuznetsov.

«New walking routes will become a link between Zvezdny Boulevard, the park next to the Cosmos obelisk on Prospekt Mira, the boulevard on Akademika Koroleva Street and the square on Novomoskovskaya Street. Also, according to the renovation program, it is planned to create an extended cycling route around the territory of Microdistricts 14, 15-16 and Quarter 104. I think that athletes will especially like this solution», said Sergey Kuznetsov.

In the lower part of Zvezdny Boulevard, it was proposed to organize places for recreation and sports, children’s play areas, and make dog-walking areas. In addition, repair of walking paths and benches is provided. On the territory of the boulevard on Akademika Koroleva Street, there will also be places for recreation.

The square of the entire landscaped territory will be 170.0 hectares. In addition, the engineering infrastructure in Ostankinsky district will also be upgraded, and playgrounds and sports grounds will be improved. Importantly, with the construction of new facilities, new jobs will appear. A diverse infrastructure will be created in the area, shops, service and catering enterprises, all within walking distance.

It is worth mentioning that from April 27 to May 10 2020, Muscovites take part in the collection of feedback on planning projects for the territory of Microdistricts 14, 15-16 and the Quarter 104, as well as on amendments to the rules of land use and development of Ostankinsky district as part of the renovation program. Residents of the capital can make their suggestions and comments on these projects on the Active Citizen website. This feedback will be subsequently transferred to the designers and architects.