Walking areas and new gardens: The renovation of embankments 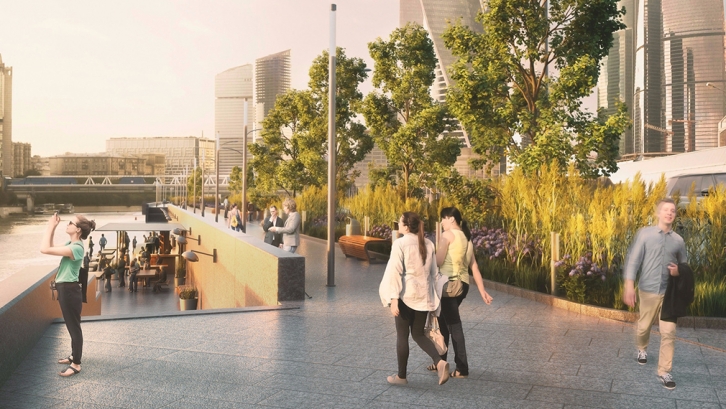 Over half of the renovation plans have been implemented at three Moscow embankments.

Moscow embankments are being renovated under the My Street programme. The renovation of the Krasnopresnenskaya, Savvinskaya, Rostovskaya and Smolenskaya embankments is over 50 percent complete, and only 25 percent of the planned work has so far been done on the Prechistenskaya Embankment. The renovation is to be finished by City Day, which will be marked on Saturday, 9 September.

The pavement and curbing stones have been removed at the five embankments, and the planned earthwork and pipe-laying are in the final stages. The drainage gates are being repaired, granite paving stones are being laid, and curb stones and the underground drainage systems are being installed. Renovation plans provide for installing a new stormwater drainage system.

The road will be covered with asphalt after all the main construction and assembly work is completed on the embankments.

Following renovation, these three embankments will become part of a common walking area along the Moskva River running from Novy Arbat to the Novodevichy Convent. Over 50,000 square metres of pavements will be covered with granite paving stones. The pavements will be widened by between 2.5 and 7.5 metres. Over 300 new lamps and LED lights will be set up along the pavements.

The pavements will be divided from the road with lawns, trees and shrubs, which will be planted later this year. Viewing platforms with benches, litter bins and information signs will be organised by the river. The facades of the buildings on the embankments will be repaired as well. 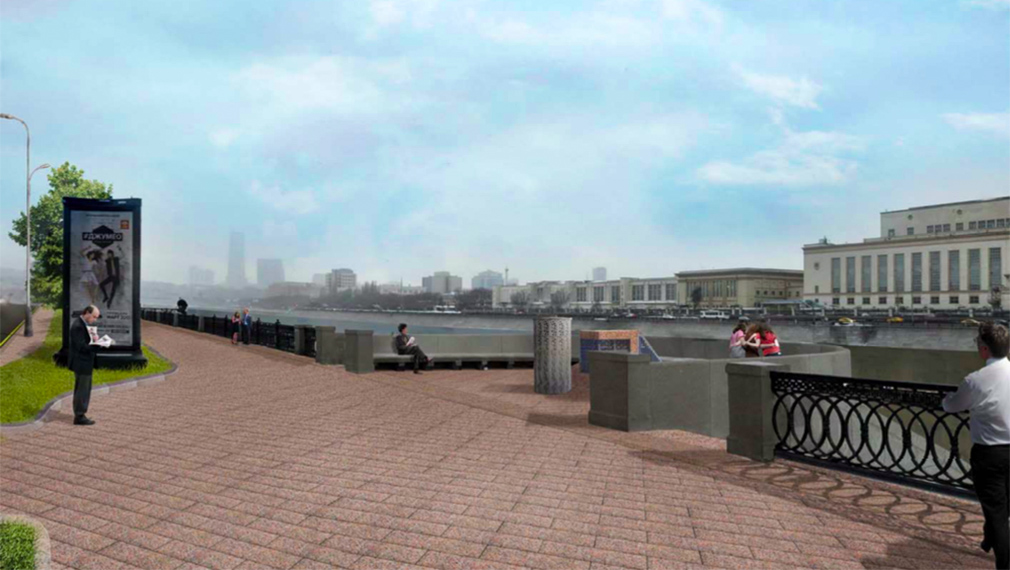 Two kilometres of pavements will be widened and a new underground drainage system will be installed on the Krasnopresnenskaya Embankment. The building facades on neighbouring streets will be repainted, including the houses that were designed by architect Iosif Loveiko in the 1950s.

New benches, litter bins and information signs with free Wi-Fi access and USB ports will be installed on the Krasnopresnenskaya Embankment.

Over 120 trees, including birch trees, red oaks, Korean mountain ash trees and ornamental apple trees will be planted in the autumn, along with over 450 shrubs, such as Thunberg’s barberry, mountain currant, Spiraea, Tatarian dogwood, common ninebark and also mock orange.

The renovated Prechistenskaya Embankment will have wide terraced pavements and a new garden near the Krymsky Bridge.

The number of water intake channels will be increased and a trench drainage system will be installed along the entire length of the Prechistenskaya Embankment. The renovation plans provide for the installation of benches, navigation signs and litter bins and for the replacement of street lamps with old-style lights. Landscape lighting will be installed near the Bolshoi Kamenny Bridge.

The facades of the buildings that were built in the late 19th century and form part of the Ivan Butikov complex of textile factories will be repainted. The renovation includes façade repairs on the tenement building that was designed and built in 1903 by architect Vasily Myasnikov.

The embankment will have parking bays for taxis and tourist coaches.

Part of the Yakimanskaya Embankment from Muzeon Park to the Patriarshy Bridge has been closed off to traffic and connected to the walking area on the Krymskaya Embankment. The pedestrian area is over 10 metres wide in this particular place. Pavements between the Patriarshy Bridge and the Maly Kamenny Bridge have been widened over 10 metres and are perfect for walking towards the Balchug and Bolshaya Polyanka or along the Vodootvodny Canal.