The Narcomfin Laundry Building Is under Renovation 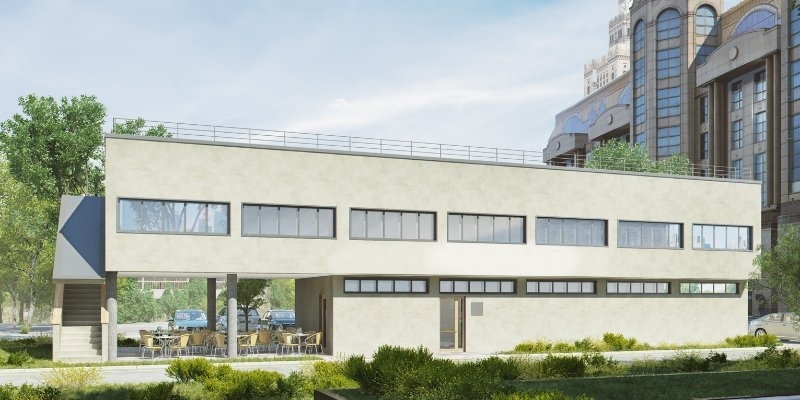 The restoration of the laundry of the Narkomfin house at 25/2 Novinsky Boulevard, bldg. 12 has commenced. At the moment accident-prevention works are in progress, specialists are reinforcing supporting structures.

The laundry is a part of an experimental residential complex of the Narkomfin building. The comprehensive restoration will be finished in 2019. A complex, which refers to one of the preserved samples of Constructivism in Moscow, was constructed within 1928-1932, designed by architects Moisei Ginsburg and Ignati Milinis. The laundry building was the last one to be built. It is separated from the residential and communal blocks by small park. The first floor partly overhangs the ground floor. According to the architects’ idea such technique visually unites it with the residential building. The boiler rooms initially located in the cellar, the ground floor housed the laundry and drying rooms, and living space with the hall and one lavatory were on the first floor. There was a terrace on the ground-floor of the southern part of the building, from which so-called open stairway flanking façade led to upstairs.

The exterior of the building will be reconstructed according to the project blueprints dating from 1928-1932. The facades will be painted white, as well as the rest of the Narkomfin buildings. In the mid of the previous century all walls of the complex were yellow, but during the investigation of the site specialists uncovered the original author’s white paint beneath the coat of yellow paint.

The utility building of the laundry is a revealed cultural heritage site, and the main block of flats is a cultural heritage site of regional significance. All works are carried out according to the project agreed with the Department of Cultural Heritage. Once the renovation is completed, the block of flats will become a residential building again, and the communal block and the laundry will house café and other public spaces.

For the past decades the building has been neglected, it was neither used nor was it heated. As a result the laundry block has fallen into emergency condition. Specialists will have to recreate the stairway with wooden rails, the sliding wood windows, the doors, the metal door handles and the latches, and wood flooring on the ground floor. The historical analogues having preserved in the residential block will serve as samples.

The building was several times rebuilt, its exterior and internal layout endured substantial changes, which altered the initial author’s idea. For example, the stairway allowing access from the ground floor to the cellar disappeared, and the open stairway and the terrace were built-up. The laundry has already been cleared from the extensions built in 1940th – 1990th, the old roof has been dismantled. The specialists are now strengthening the supporting structures, the foundation and the soil beneath it using injections of grout.

The old plaster layer has already been removed from the facades. Now the blocks that have formed the walls and got destroyed within almost a century are being taken out and replaced with the blocks that are similar in size, type and shape. Later, they will be plastered, painted white and covered with special composition that will protect them from the adverse impact of the environment.

The restoration of the Narkomfin building began in 2017. The last April the restorers restored the ground floor of the residential building to its original form, they dismantled the partitions hiding three rows of concrete columns which the house stands on. Over the course of the restoration the layout of the apartments, passageways, halls, and former public spaces – the library, canteen, and other rooms – will be restored. The final stage involves performance of the finishing works and landscaping around the complex.

The residential block of the Narkomfin building is a five-floor building 85 m long and 17 m high. There are only two stairwells on the sides for the whole length of the building. The ground floor which is 2.5 m high consists of round columns – elements of the building framework.

More than a thousand of architectural landmarks have been restored in the capital over the past seven years. These include Levenson’s Printing House, the Communal House designed by architect Ivan Nikolayev, monuments to Alexander Pushkin and Maxim Gorky, and Kievsky Railway Station. This year the restoration of the facades of another landmark of constructivism, the Locomotive House, or “house with a smokestack” on Novaya Basmannaya street was completed. The resemblance to a locomotive is enhanced by its nine-storey corner tower, reminding locomotive chimney. It was constructed in the 1930s while the building itself was built in the second half of XVIII century.

The complex restoration of the building, where Soviet sculptor Vera Mukhina lived and worked, has also been completed. The specialists set in order the indoor premises and the building’s facades. The building design combines classic architecture and elements typical for Constructivism. Alexander Shilov’s Art Gallery, too, has undergone a facade renovation. The brick mansion built in 1829 is regarded as an example of Moscow eclecticism.