Sports Complex with Ice Arena, Center for Rhythmic Gymnastics and Motor Sports to be Built on Letnaya Street 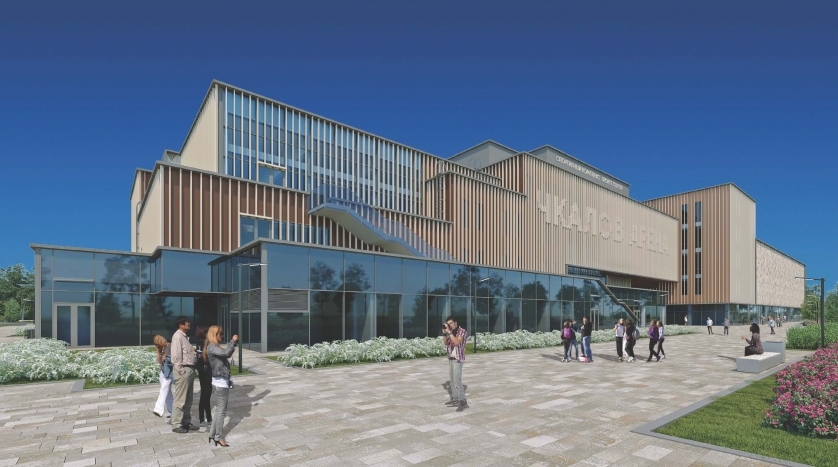 Moskomarkhitektura approved the Chkalov Arena project on the territory of the former Tushino airfield. The sports complex on Letnaya Street will include an ice palace, a center for rhythmic gymnastics and motor sports, said Sergey Kuznetsov.

“The entire building will be divided into three corresponding multi-storey blocks. However, the rhythmic gymnastics center will be located in a separate building, which will be connected with the ice arena and the motor sports center by an overhead passage. In general, it will be a modern sports facility, perfect for training and competitions,” Sergey Kuznetsov explained.

The sports complex will be located at Letnaya Ulitsa vl. 73. Its total area will be about 32 thousand sq.m.

The Rhythmic Gymnastics Center block is designed for training and local competitions. In addition, the center will provide general physical training, give place to play volleyball, handball, basketball in a universal transforming hall, and visit a fitness center with a swimming pool.

The ice arena will be adapted for hockey and figure skating. For this purpose, it will be equipped with two ice rinks, as well as a lot of auxiliary rooms: coach room, dressing rooms, rooms for individual lessons, choreographic rooms, and special physical training rooms.

The Motor Sports Center will share premises with the Russian Fencing Federation. The latter will have several training rooms for 3 and 9 strips, as well as coaching and inventory rooms.

To decorate the external appearance of the building, a combination of rectangular volumes of different zones of the complex was chosen. In the decoration, the authors decided to use ZAMELs and perforated cassettes, which harmoniously fold into a single architectural image. The territory will be landscaped. Trees and bushes will be planted here, and a pedestrian zone will be organized. The designer is OOO AK Meerson and Voronova.