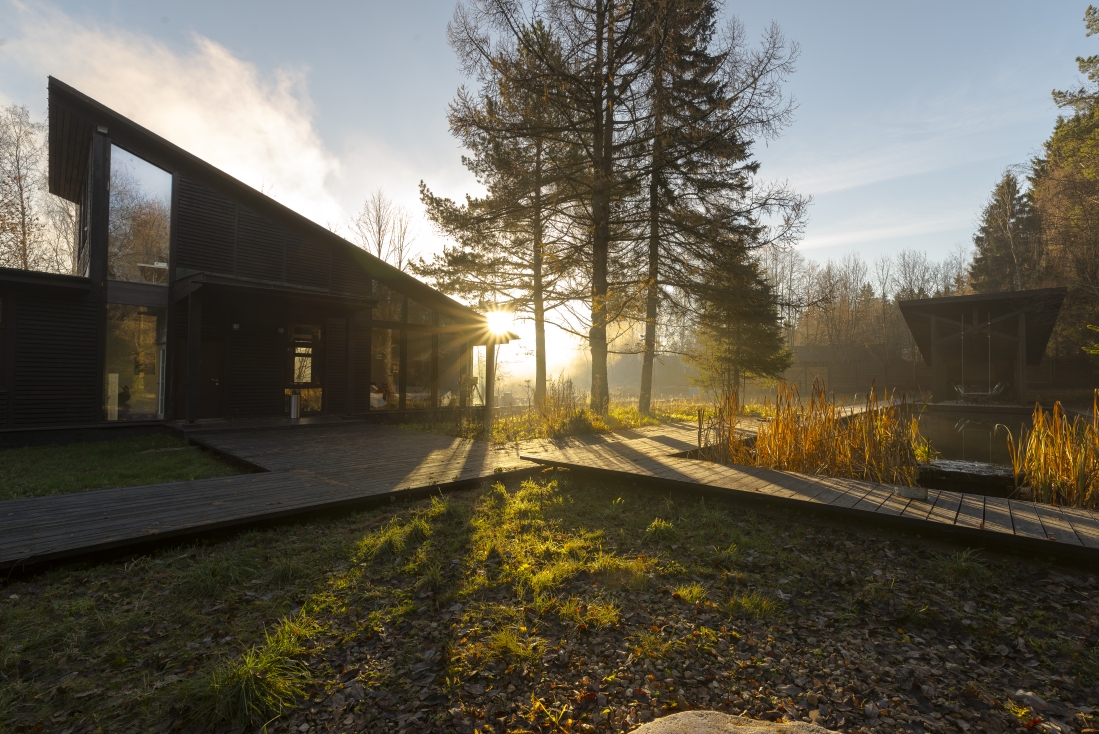 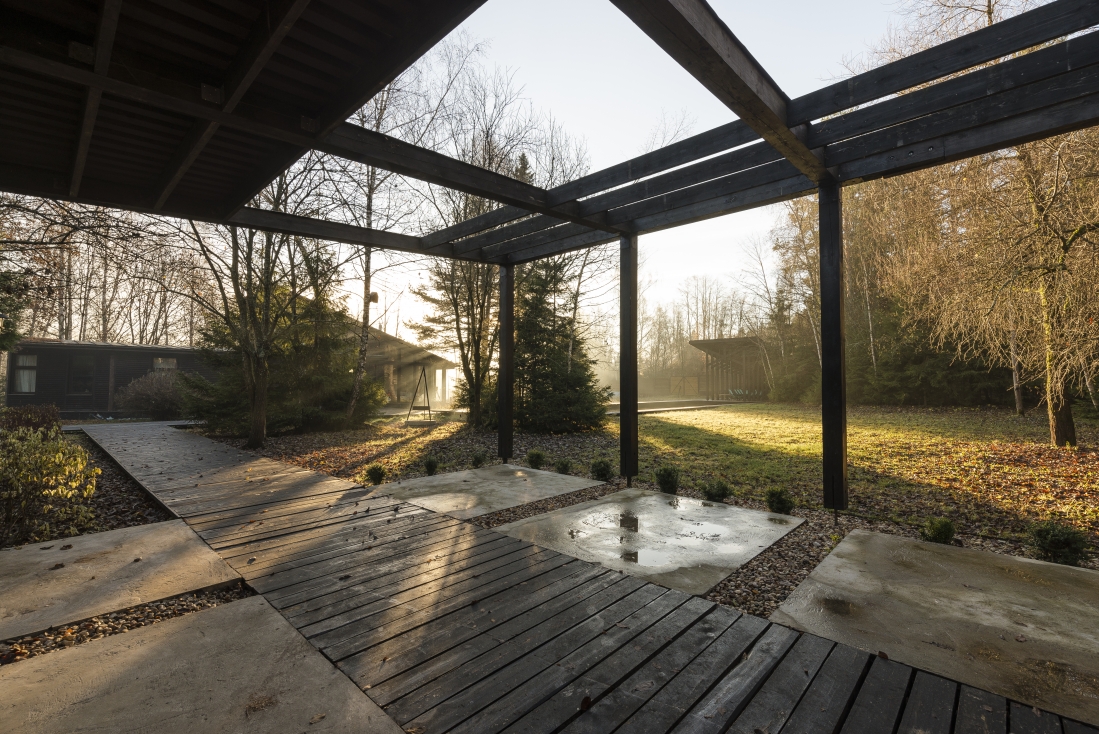 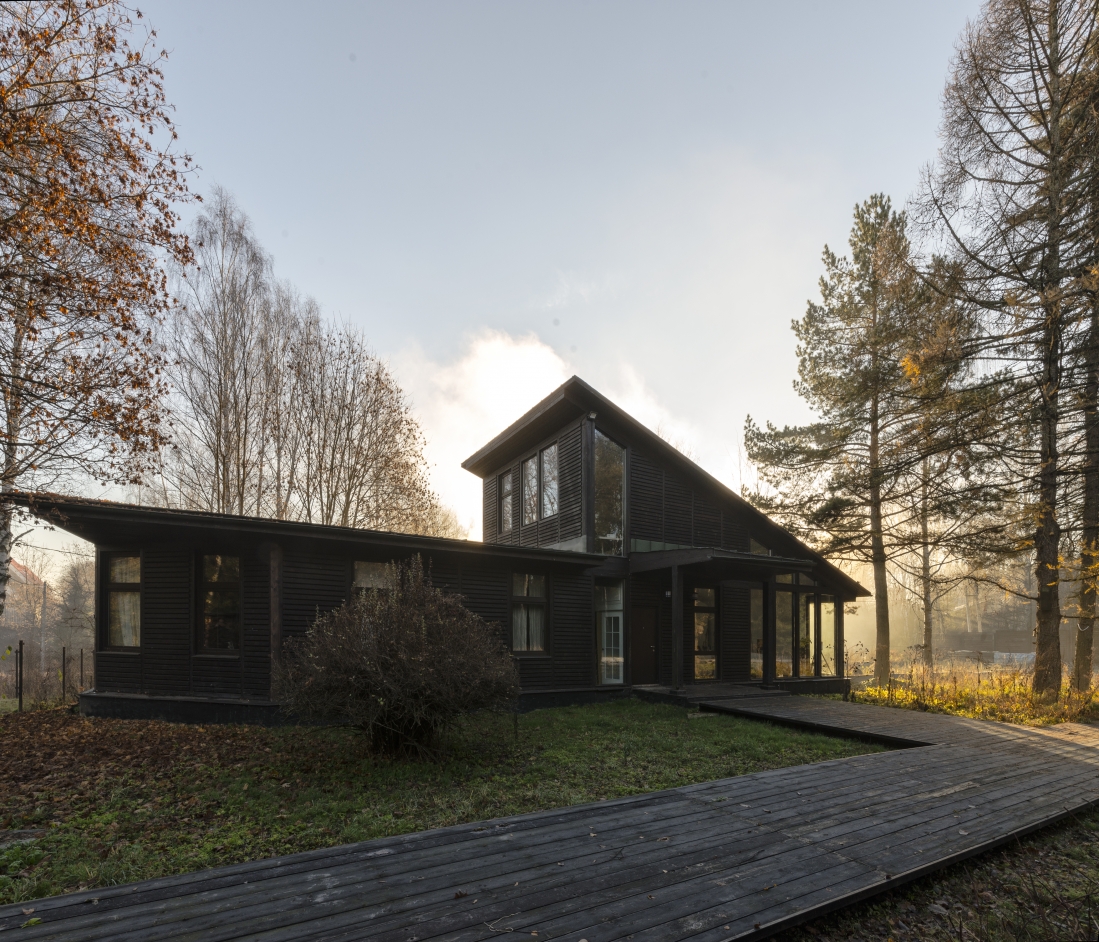 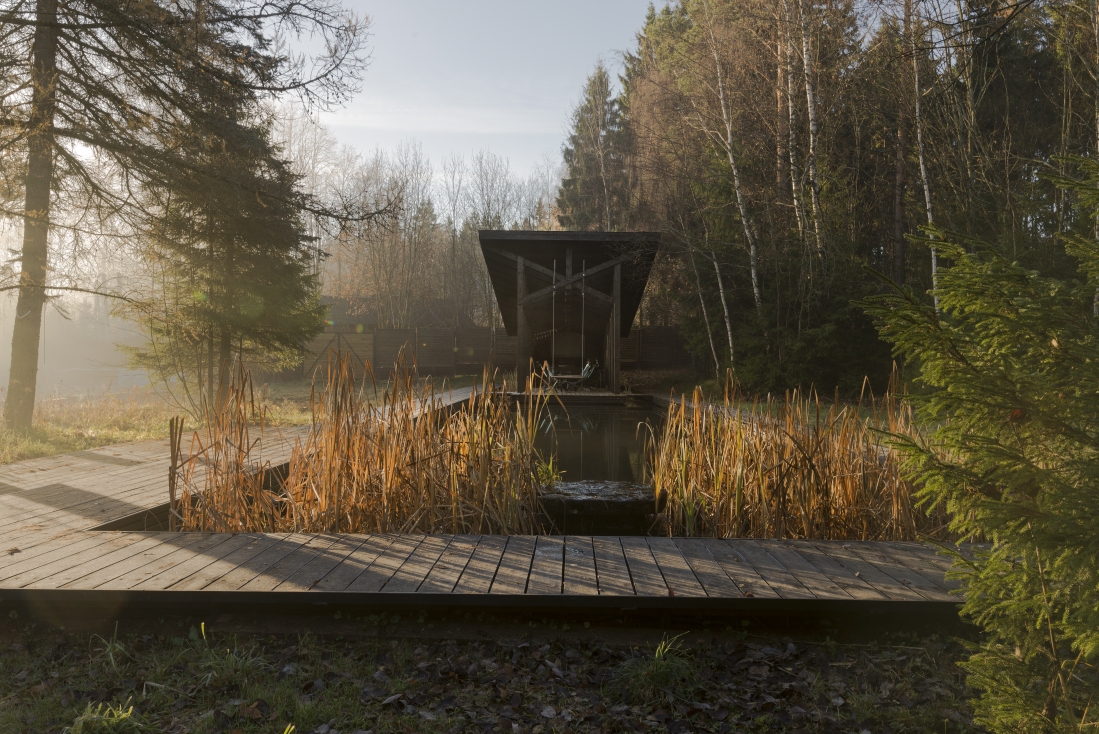 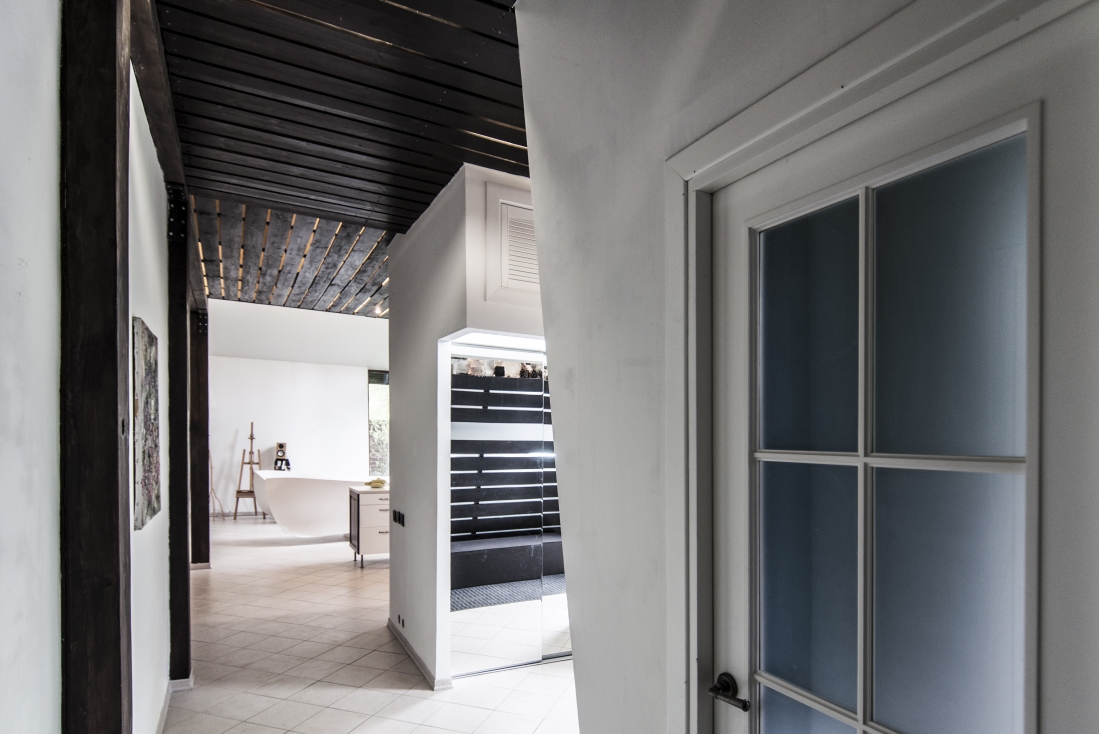 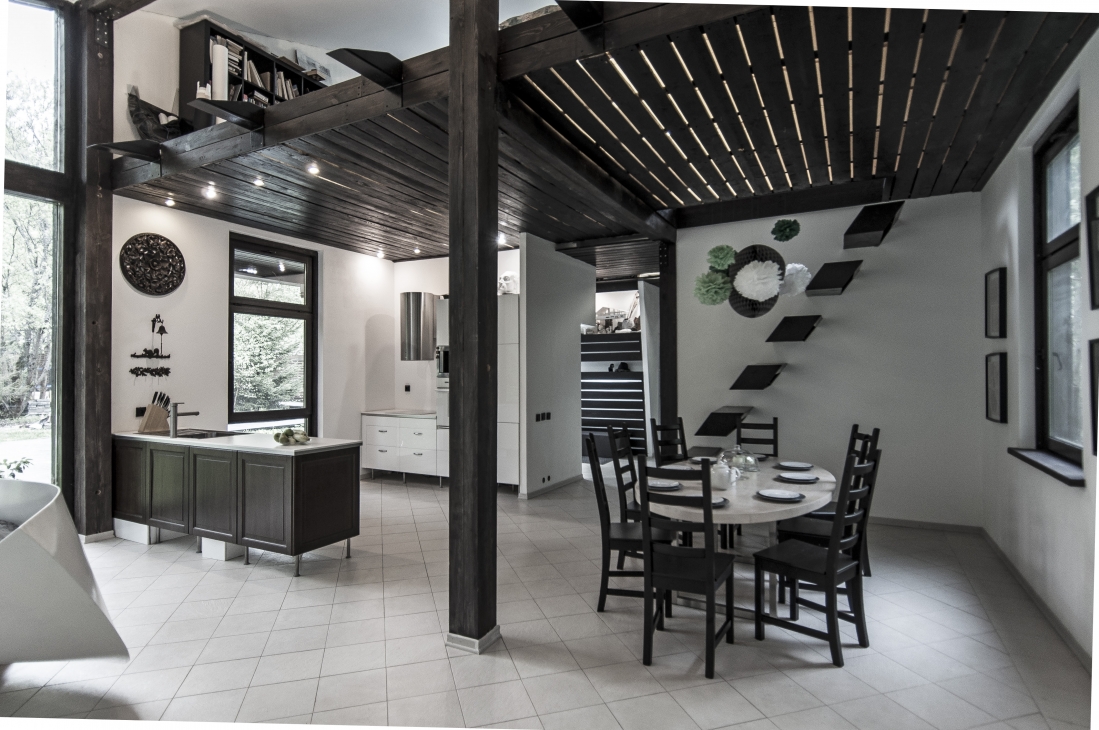 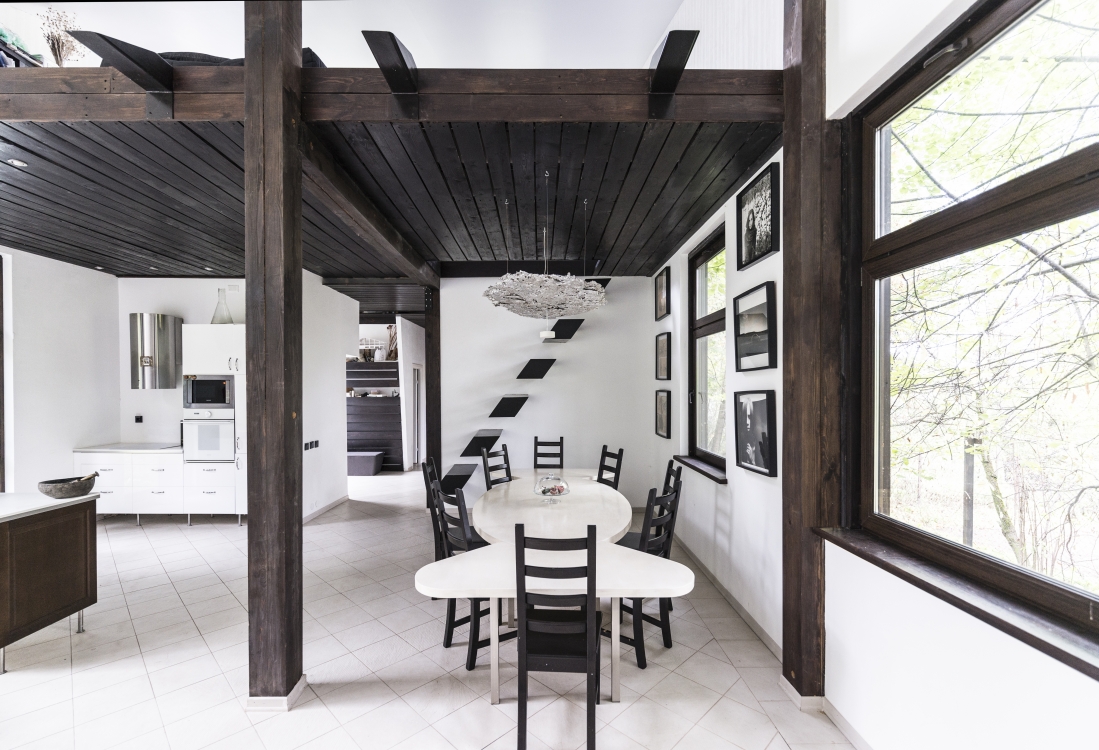 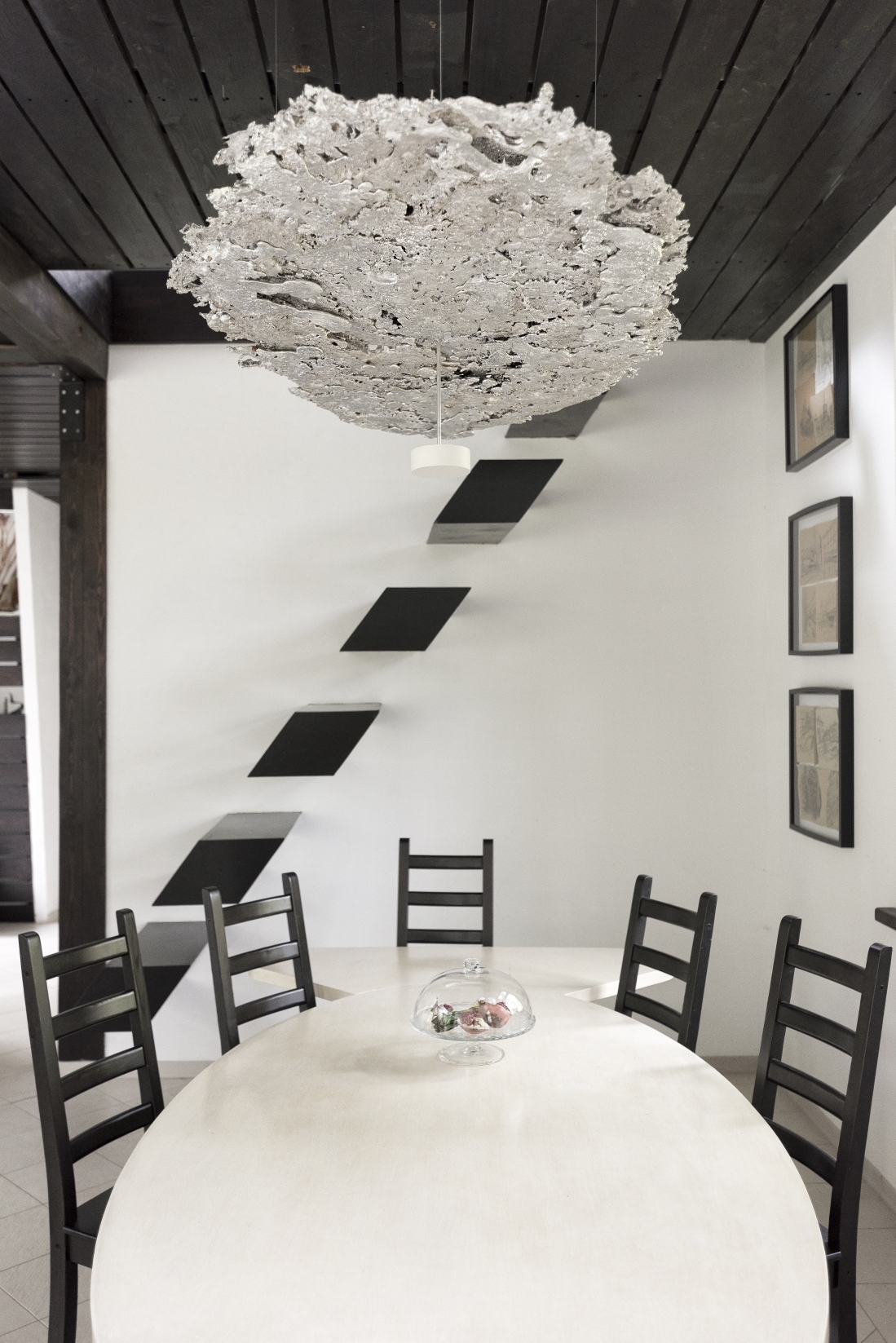 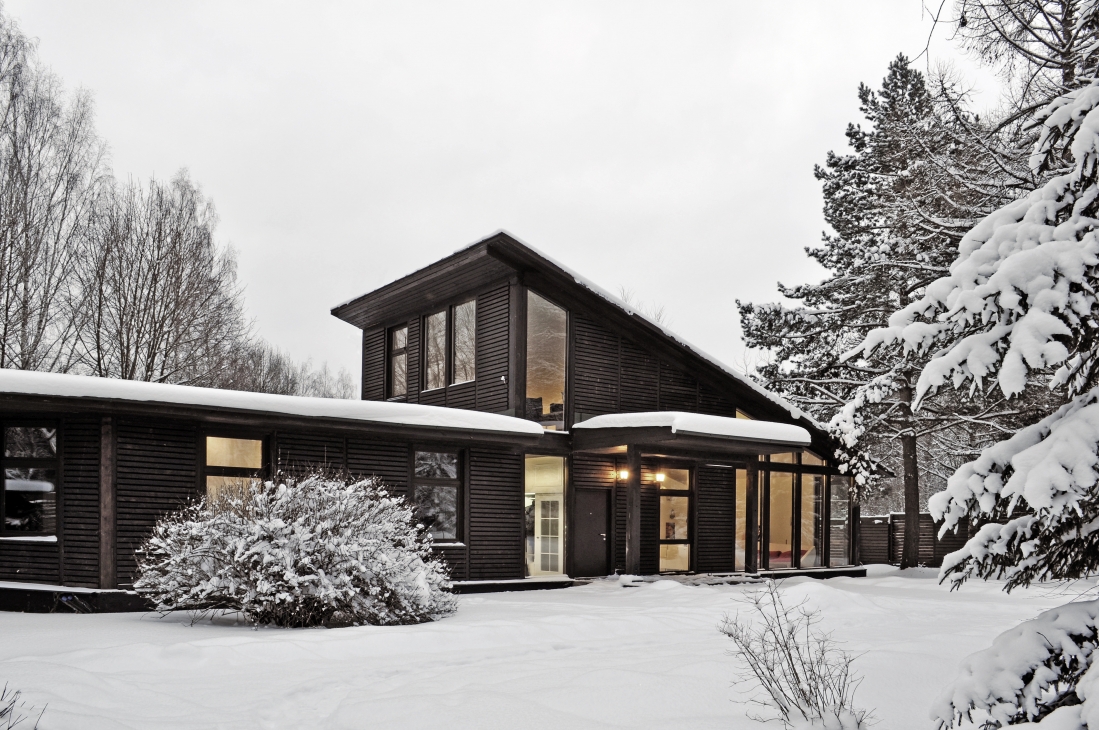 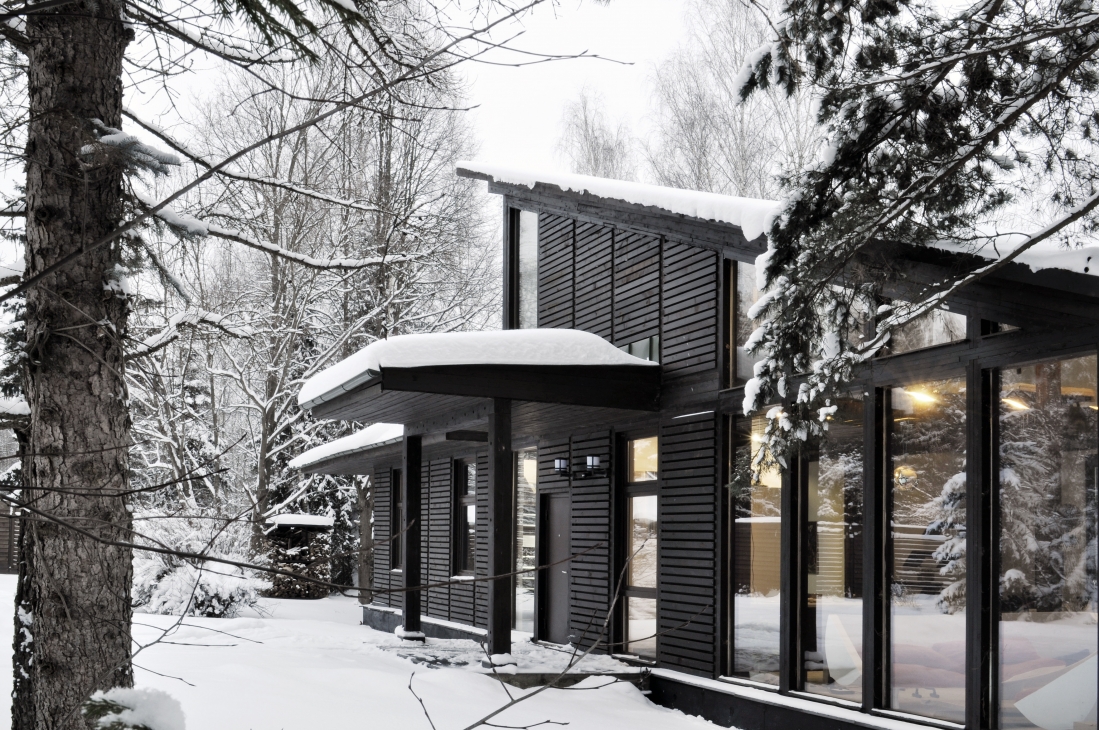 It is a two-story house made of wood, whose architecture refers us to the traditions of constructivism. The partner and chief architect of the Architectural Bureau KPLN Sergey Nikeshkin built it for himself and his family according to the principles of environmental friendliness and harmony with nature.

The house with a total area of 190 sq m was built on a forest plot with trees and a pond. One of the main tasks of the architect is to carefully integrate the building into the surrounding landscape, preserving it if possible. The territory was planned in such a way that the house itself, a summer kitchen with an oven, and also a creative workshop were located on it without damage to nature.

Two floors of the house are asymmetric - the first is a massive volume with a flat roof, and the second is a small beveled superstructure. In addition to the house, there is a summer kitchen on the plot. In its architecture it is consonant with the house and is also made of wood.

The house is completely built of wood (mainly pine) - the most environmentally friendly material, which is also very plastic for the perfect embodiment of the ideas of the designer. The architect managed to create an expressive image in the spirit of constructivism, while not losing functionality. It is easy to breathe in the house, it perfectly retains heat (it is heated by a heat pump) it is convenient and environmentally friendly. There are no radiators in it, warm floors are enough for a comfortable microclimate in the house.

Most of the living space is on the ground floor. Here is a bedroom, a living room, a kitchen. The second floor is a study. Initially, the superstructure was not planned, but in the end the mezzanine and the attic volume made the appearance of the building more interesting and more complicated.

The active use of glass adds permeability, air and space to the interior. Thanks to the panoramic glazing on the first and second floor, the house is completely filled with natural light. Trees and shrubs on the site are located so as not to obscure the windows of the house.

A minimalist interior in light shades maintains a feeling of bright light inside. White walls, furniture in the kitchen, in the living room and dining room on the ground floor stand in good contrast with the natural rough texture of the dark pine timber. On the second floor, where the study is located, there is an original staircase without a railing, built of metal brackets, which were bolted to the wall.

Art objects created by architect Sergey Nikeshkin became a decoration of the interior: for example, a chandelier cast by himself from 50 kg of aluminum, resembling a lunar eclipse. Aluminum for the chandelier was melted in a wood-burning stove, and the form was poured directly into the ground, and its texture was formed by the relief of the soil. The owners also made sofas in the living room themselves from old wooden boats that are painted white so as to completely hide the wooden texture. And the fountain on the site is nothing but a millstone.