Recreational Areas along the Yauza to Turn into a Single Superpark 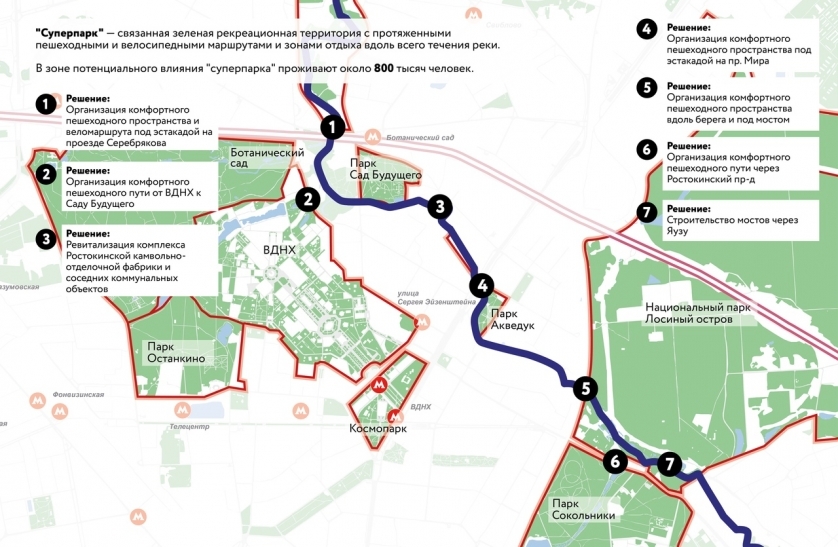 The new project proposes to combine existing parks along the river into one continuous recreational area of about 20 square kilometers, Yauza Superpark. This was announced by Chief Architect of Moscow Sergey Kuznetsov.

In the north-east of Moscow there are many recreational area, the longest of them are partially or completely located along the Yauza. These are the VDNKh, Main Moscow Botanical Garden of Academy of Sciences, Ostankino Park, Sokolniki Park, Garden of the Future Park, Aqueduct Park, Losiny Ostrov National Park. All of them are now actively developing and improving, but they exist autonomously from each other. The main reason for the incoherence of these territories is the lack of comfortable pedestrian spaces between them, especially at the intersection with highways and the river.

“The concept, currently being developed by the Institute of the General Plan of Moscow by order of Moskomarkhitektura, involves the organization of convenient pedestrian paths and bike routes at the most problematic points of the territory along the river, on the section from the Moscow Central Circle station Botanichesky Sad to Krasnobogatyrskaya Ulitsa. The project also provides for the revitalization of the Yauza floodplain in the area of the Rostokinskaya worsted finishing factory, the expansion of transitional and bicycle links under Prospect Mira and the construction of a bridge that will connect Sokolniki and Losiny Ostrov,” noted Sergey Kuznetsov.

“We adhere to the principle of “local measures - a global effect” and offer delicate, piecemeal transformations that will result in a superpark, whose area will have about 800 thousand Muscovites living there,” added Vitaly Lutz, head of the department for perspective projects of the Genplan Institute of Moscow.