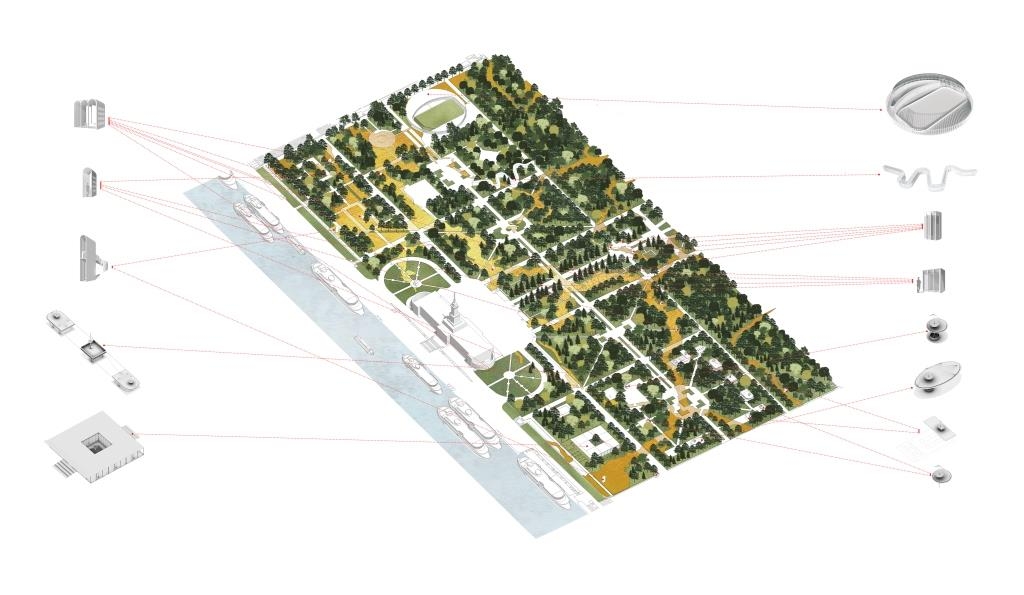 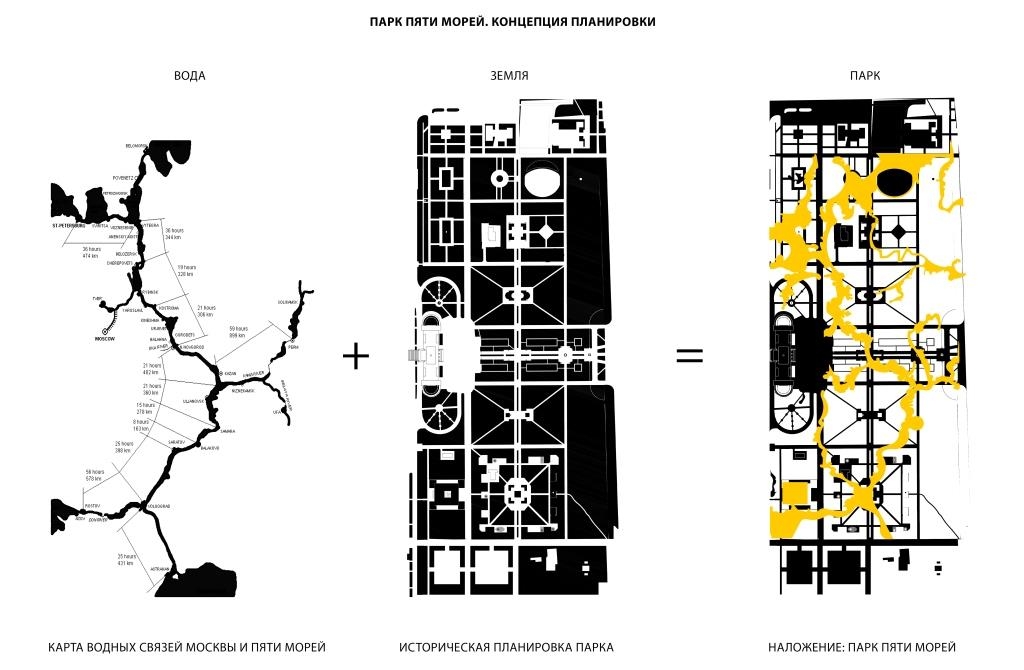 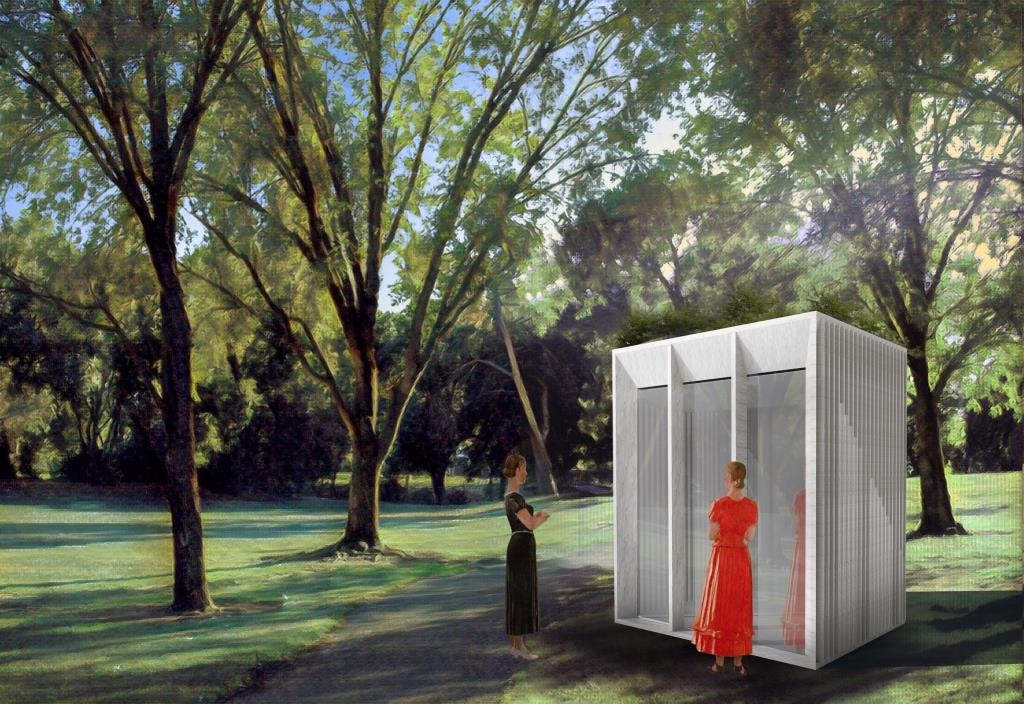 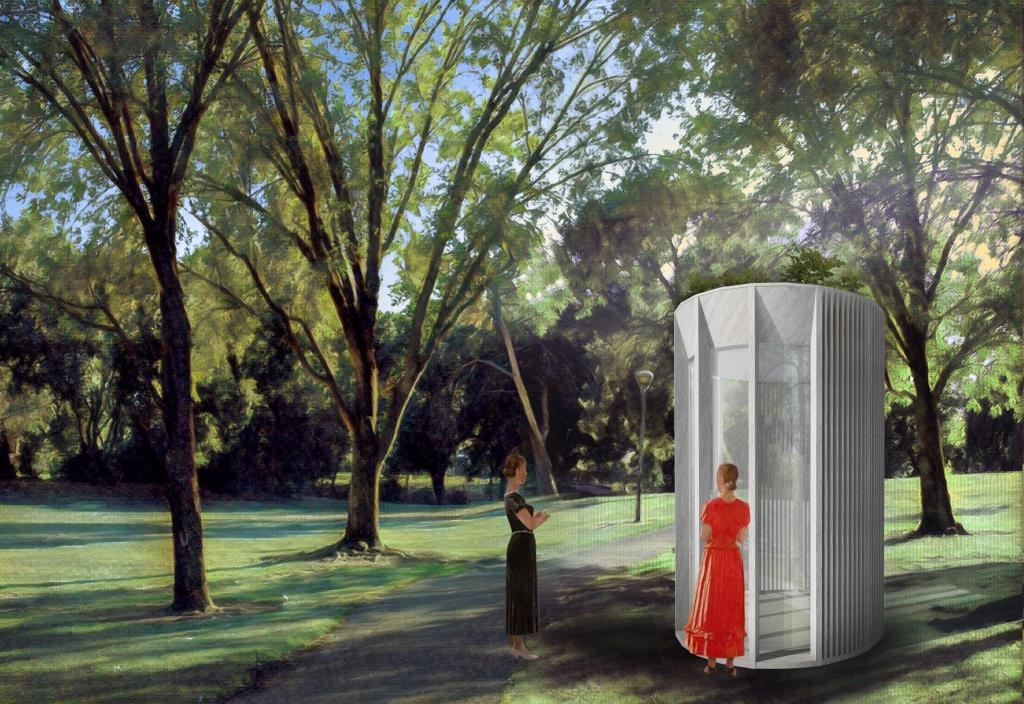 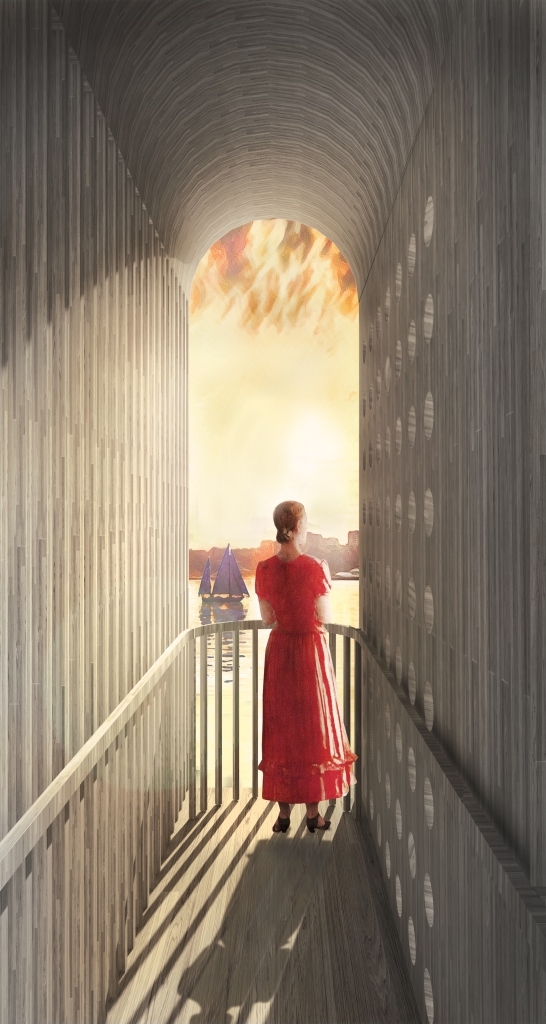 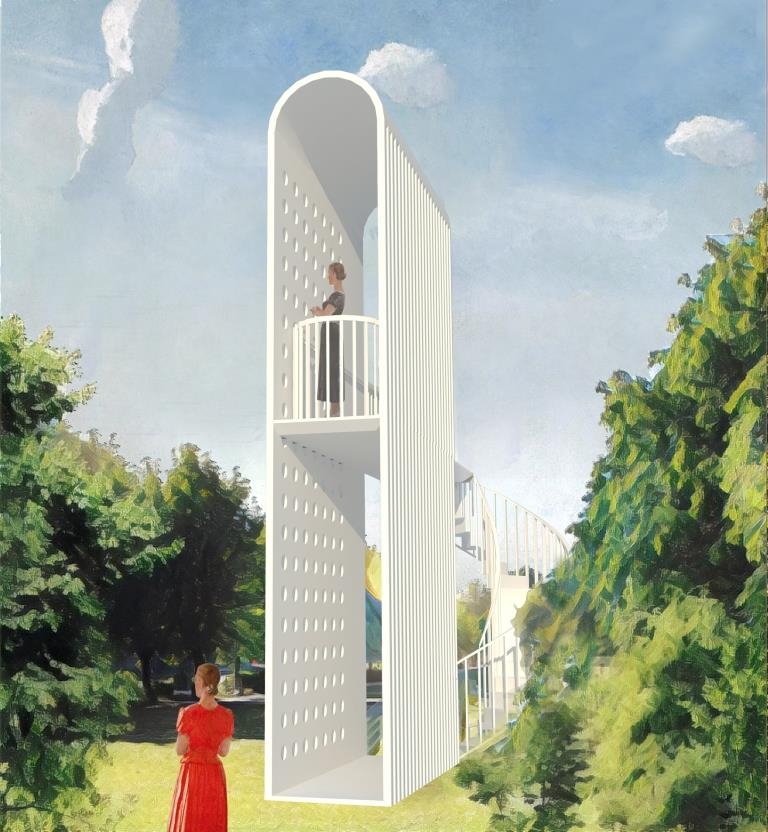 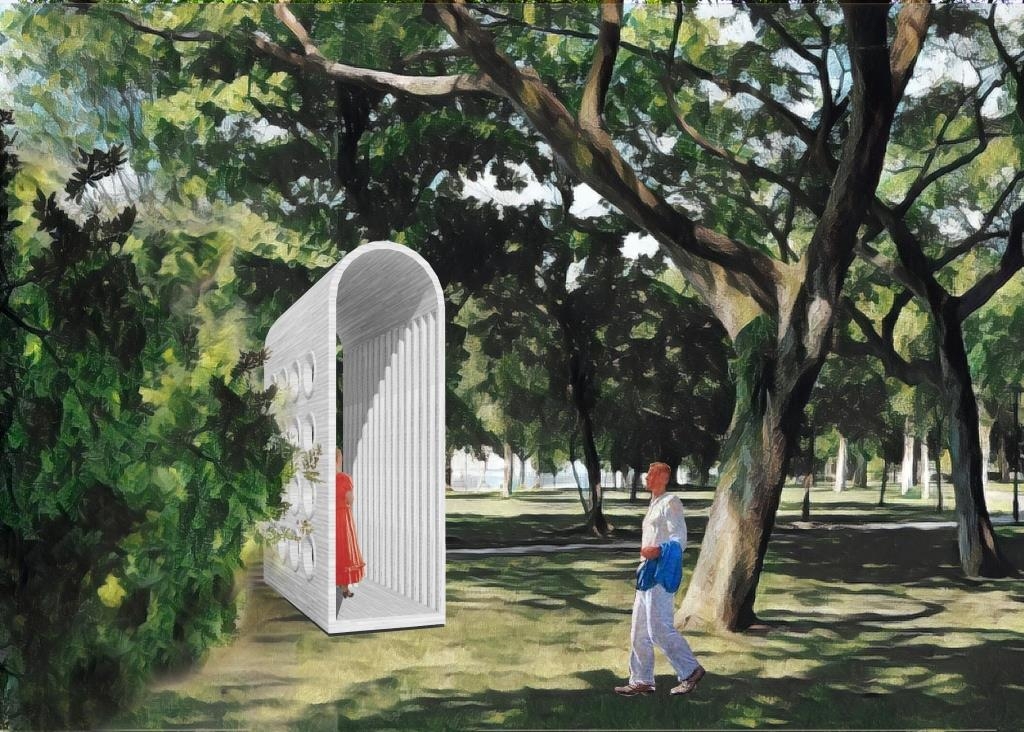 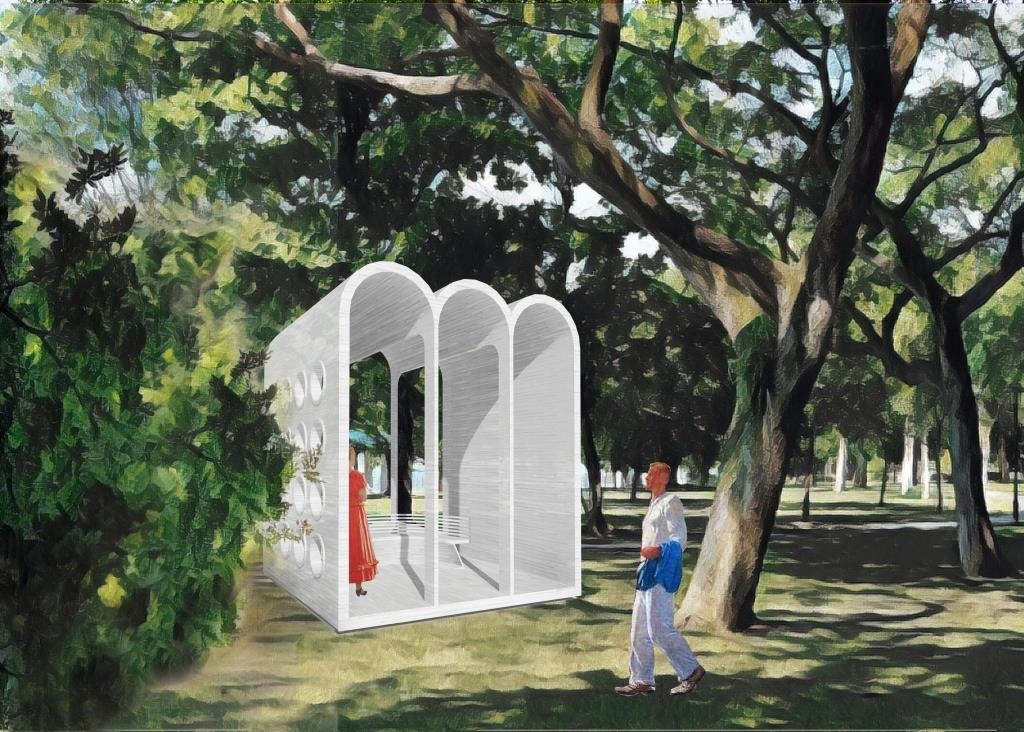 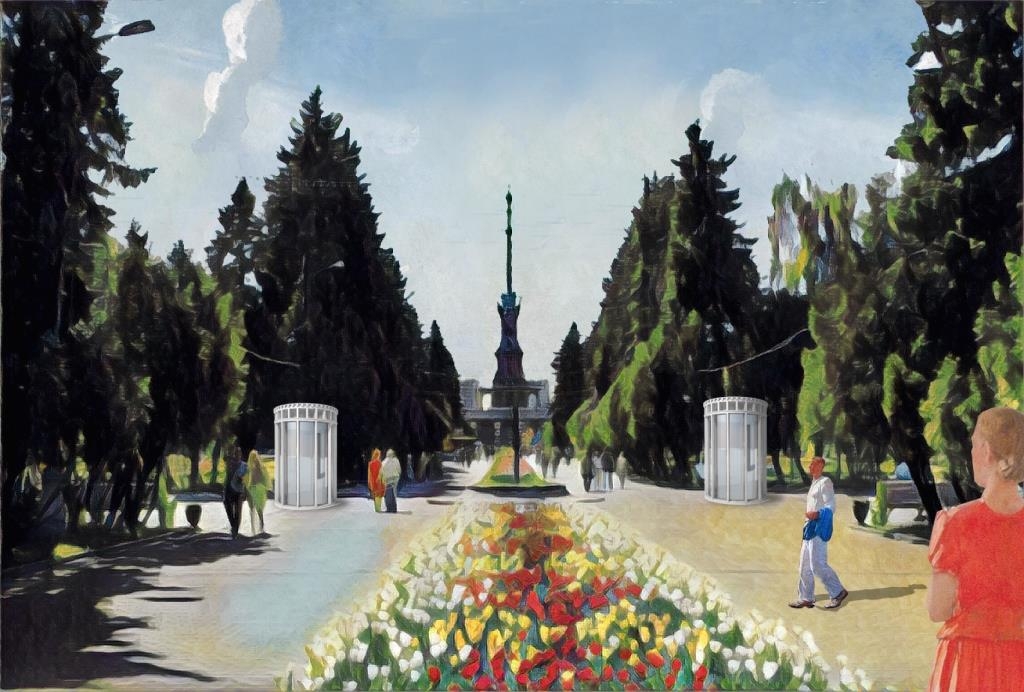 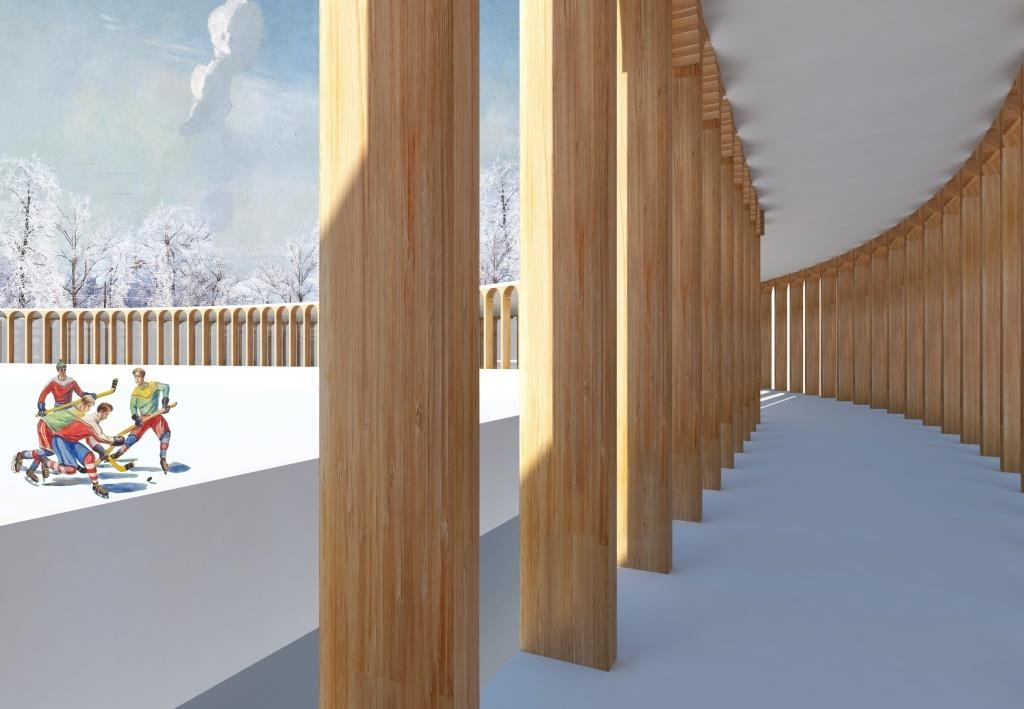 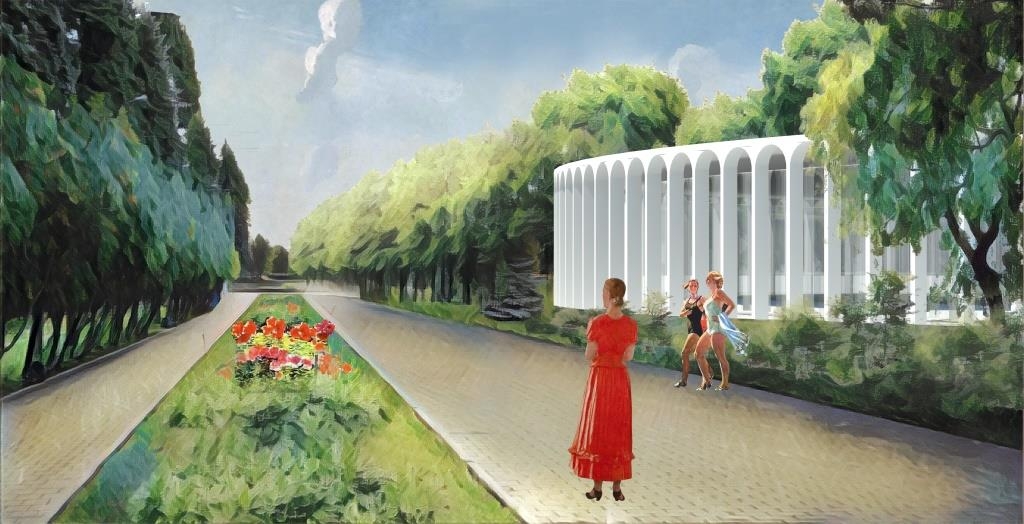 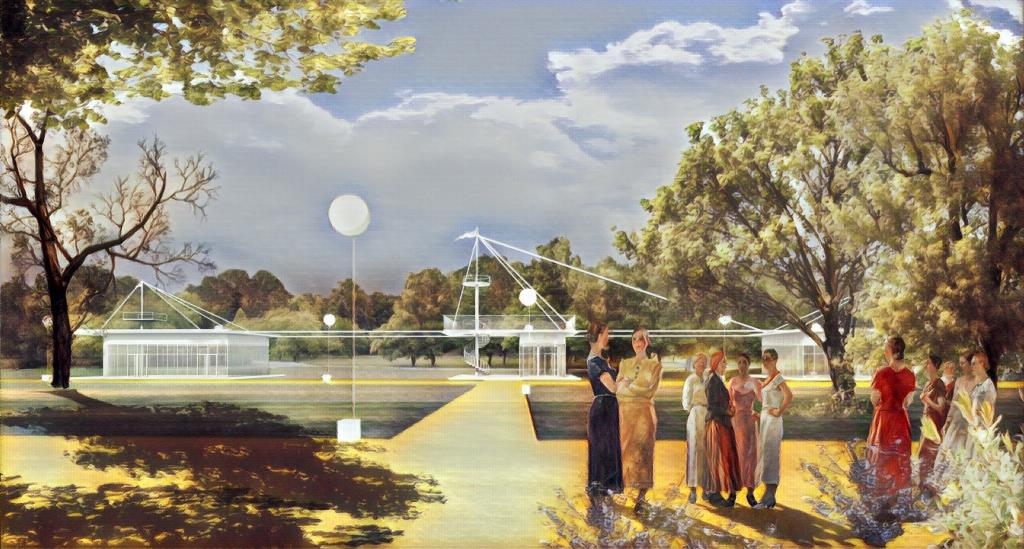 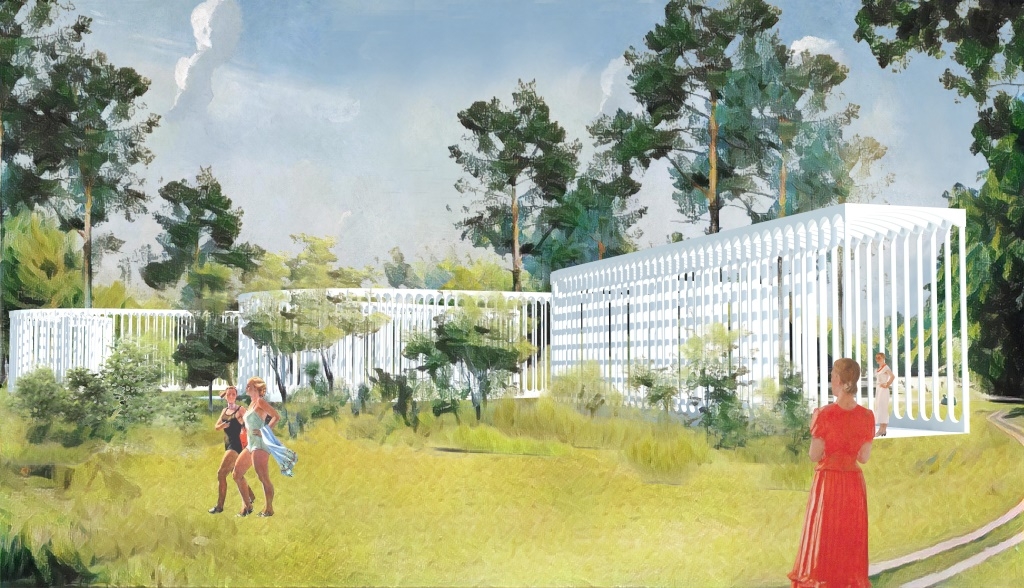 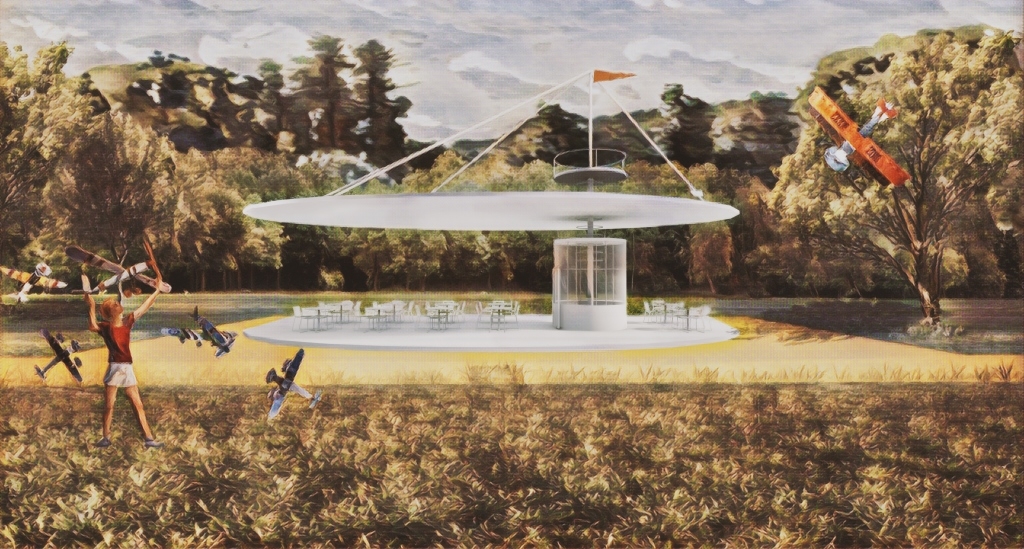 The architects of Kleinewelt Architekten and Citizenstudio have developed an original concept for restoration and reconstruction of the Park of the North River Terminal which implies that visitors will be getting around there the same way as on the river system of European Russia.

We discussed the ideology and design solutions of the park with partners at both architectural offices: Nikolay Pereslegin, Sergey Pereslegin, Georgy Trofimov, Mikhail Beilin and Daniil Nikishin.

Archcouncil: Tell us about the concept. How did you come up with the idea of a geographic map?

Nikolay Pereslegin: The North River Terminal is associated with Moscow’s sustainable image as the «port of five seas». The capital acquired such status after the opening of the Moscow Canal that connects the Moskva River with the Volga River. After the Volga-Don Canal had been constructed, people could get to five seas from Moscow by water: the White, Baltic, Azov, Black and Caspian seas. So my colleagues and I decided to turn a walk in this park into a little journey.

Sergey Pereslegin: The River Terminal is a unique place in Moscow; it is the only gateway to the water world, river system, through which you can reach the sea. Also, it can be metaphorically called «seaside park», because there you can find not only a riverside but also a seafront promenade. All-in-all, traveling by river is absolutely different way of moving around in Moscow. We tried to make everything in this park so unhurried to emphasize that it’s a very quiet and cozy place, as opposed to railway stations or airports.

Nikolay Pereslegin: And, of course, this place has a huge potential. We believe that the Park of the River Terminal is kind of a manifesto of uniqueness and we would like everyone to see it.

Mikhail Beilin: We highlighted two themes in the project: firstly, our aim is to restore the monument of architecture — the Terminal building and the park itself, which is an object of landscape art and its whole path system is under protection. Secondly, we want to create a new stage in the park history and make it a part of Moscow’s micro tourism system. We made a restoration layer and a route-layer in the form of a geographical map of the river system in the European part of Russia.

Nikolay Pereslegin: It was important for us to separate these layers. There is a historical network of paths, where even pavement texture won’t be changed, only restoration work will be implemented. The geographical map is conditionally placed over the historical layer; as a result, a new layer is formed to combine all conceptual parts of the park. It is a covering layer, on top of which all new architecture — gazebos, pavilions, belvederes — are located.

Daniil Nikishin: Our vision of the new history of the park is presented like journey on the river, where each object has the name of a certain city and is located in accordance with its geographical position. Moscow, for example, is represented by the main building of the River Terminal. Saint Petersburg is a large belvedere. And then we have identified large cities such as Kazan, Samara, Volgograd and smaller ones, for example, Kargopol. In addition to this, the exhibition pavilion symbolizes the Vychegda River, and a sports complex with a hockey rink is Onega. Therefore, the seaside charm of the southern areas in the park is combined with the northern style reproduced in the River Terminal building.

Archcouncil: What is the current state of the park?

Nikolay Pereslegin: It’s disconnected with city life and, in fact, it functions like a spatial firewall between the river and the city, while opposite should be the case.

Georgy Trofimov: This iconic park was built in the late 1930s; we call it an area of happy Soviet childhood. However, now it looks like a forest. And the Terminal building is closed.

Sergey Pereslegin: The territory has no functions, although they had been planned. We are restoring them partially; also, some new facilities will be added. Our objective, on the one hand, is to restore and preserve the park as it is, on the other hand, we have to introduce something new. For example, in the old park, there used to be a restaurant — we are going to replace it with a new one called Volga which is designed in style of the late 1950s — early 1960s. It will be made of glass offering spectacular view of the river. It is the only place where we can locate a structure like this, pursuant to architectural object protection rules.

Georgy Trofimov: There is a children’s area next to it; the southern river system runs through the playground, there we have Rostov-on-Don and Astrakhan. We proposed to design the children’s play area in the style of river steamboats of the 1930s. For example, the kid’s club is going to have a large long roof looking like a deck.

Archcouncil: Tell us about the pavilions. What other facilities will appear in the park?

Mikhail Beilin: Several types of gazebos and belvederes will be constructed in the park. It seemed to us important to reveal a new dimension of the park — it used to be back then, when the colonnade of the Terminal building was open. According to the new concept, this function is assigned to the belvedere — gazebos are to be located at several sites of the waterfront. Stylistically, this is a homage to the architecture of the River Terminal with its distinctive arched windows and openings. The gazebos are light-weight structures made of wood for one or more people. The colonnade of the sports complex is also an arcade performed in the style typical of the 1930s; it is open and its rear section is enclosed having a gym, storage facilities and other things.

Archcouncil: And what about the mooring area?

Daniil Nikishin: Unfortunately, the wharf area, as well as the parterre section which should be designed together with the Terminal, is excluded from the park project. The only thing we offer to implement under the concept is to open stairs from the park towards the waterfront and remove the existing fence.

Archcouncil: How did you divide the work between the two offices?

Sergey Pereslegin: We created together the general ideology, concept of the project and the master plan. And when it came to park facilities, we decided to divide the territory into two parts: Kleinewelt Architekten work on the southern section which has a restaurant and a large children’s playground, Citizenstudio — the northern part of the park where an exhibition hall and a hockey rink are located and gazebos scattered around the park. We tried to reach a compromise between the historic architecture of the park, the terminal itself and modern tendencies. Architectural objects designed by our bureau tend to have more style of the 1960s, while Citizenstudio implement their ides in the style of 1930s, because the park had constructions of both periods.

We believe that the Park of Five Seas with its special dramatic art ideas will become one of the most attractive landmarks of the city.

The Park of North River Terminal was laid out in 1936-1938, simultaneously with the construction of the terminal itself in 1937. The opening of the river terminal and the park was dedicated to the launch of the integrated water system of canals, rivers, locks, reservoirs, lakes and seas. After the opening of the North River Terminal the famous epithet appeared: Moscow is the Port of five seas — the White, Baltic, Black, Azov and Caspian seas.

The park is a landscape art monument of the Soviet period — it is a unique place marked with the history of Soviet Moscow.