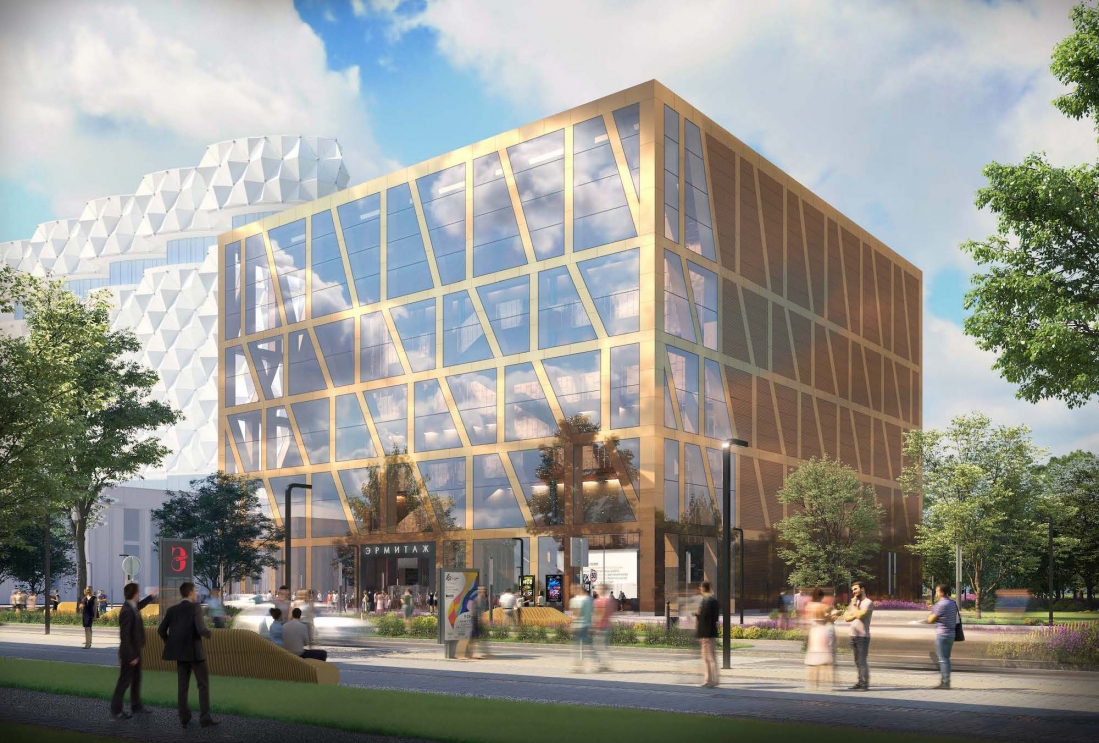 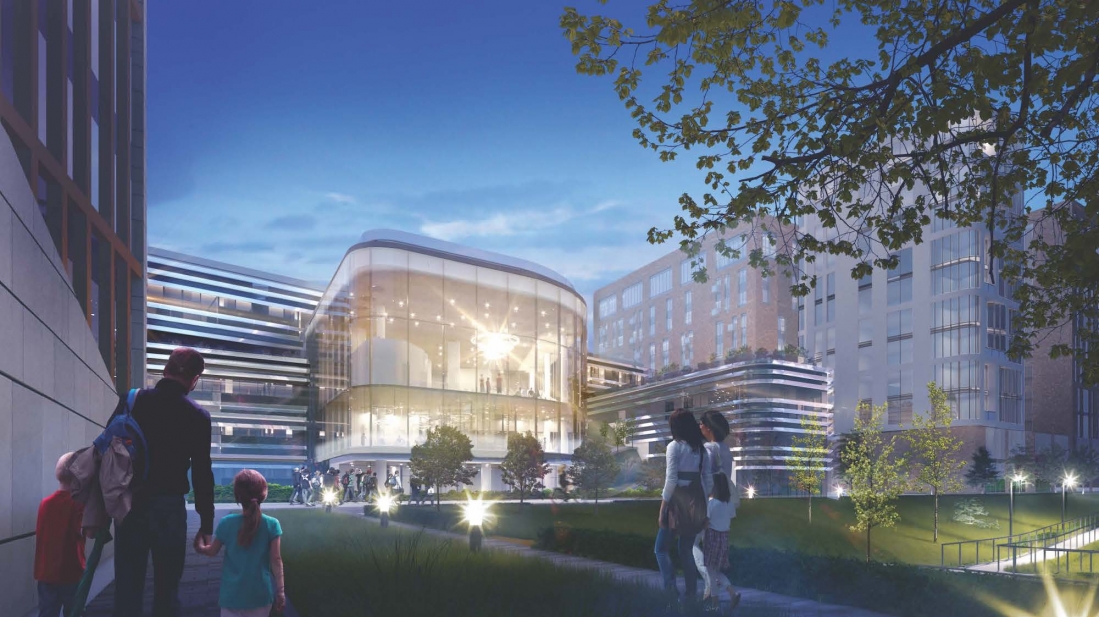 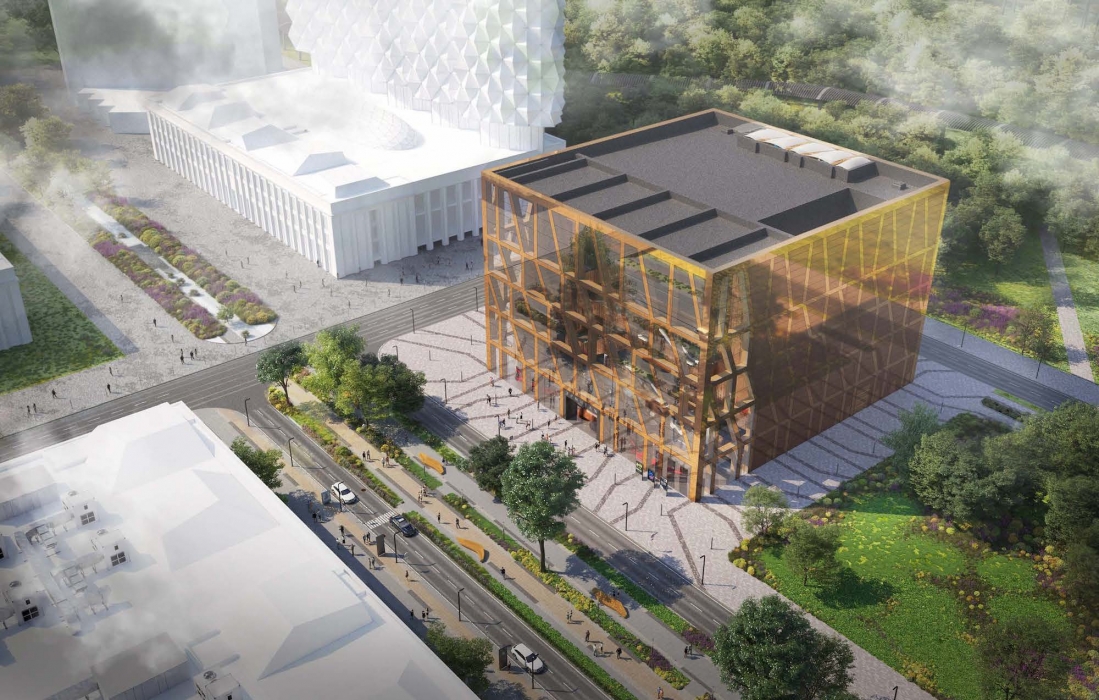 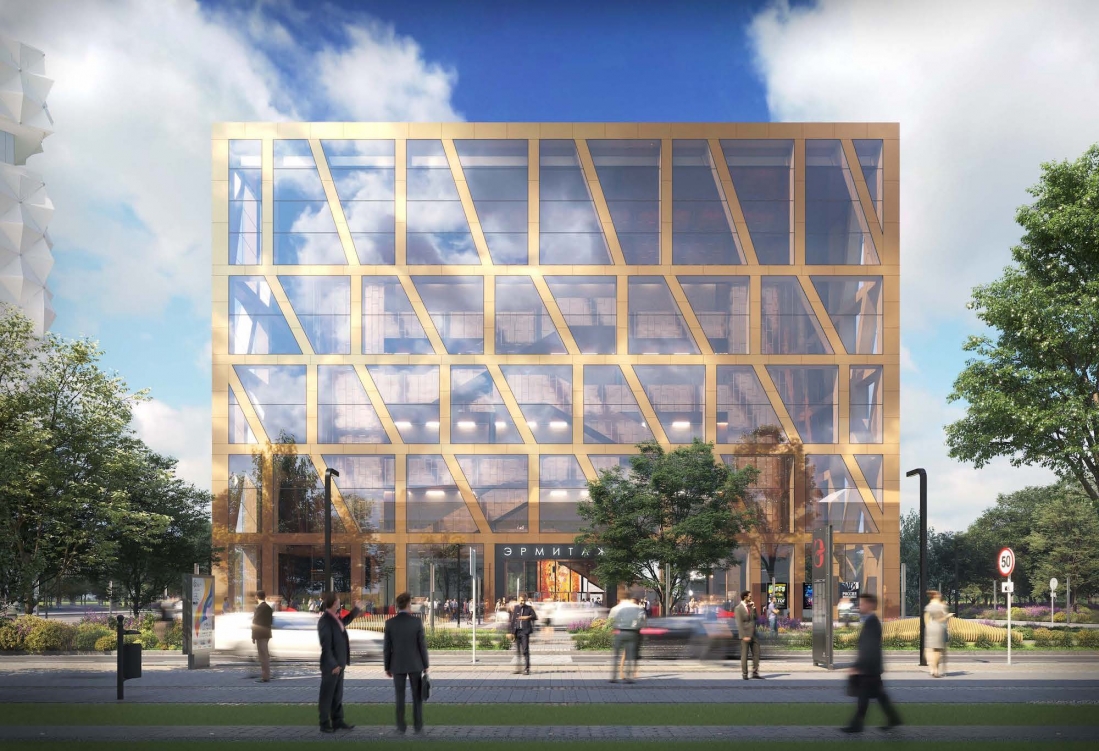 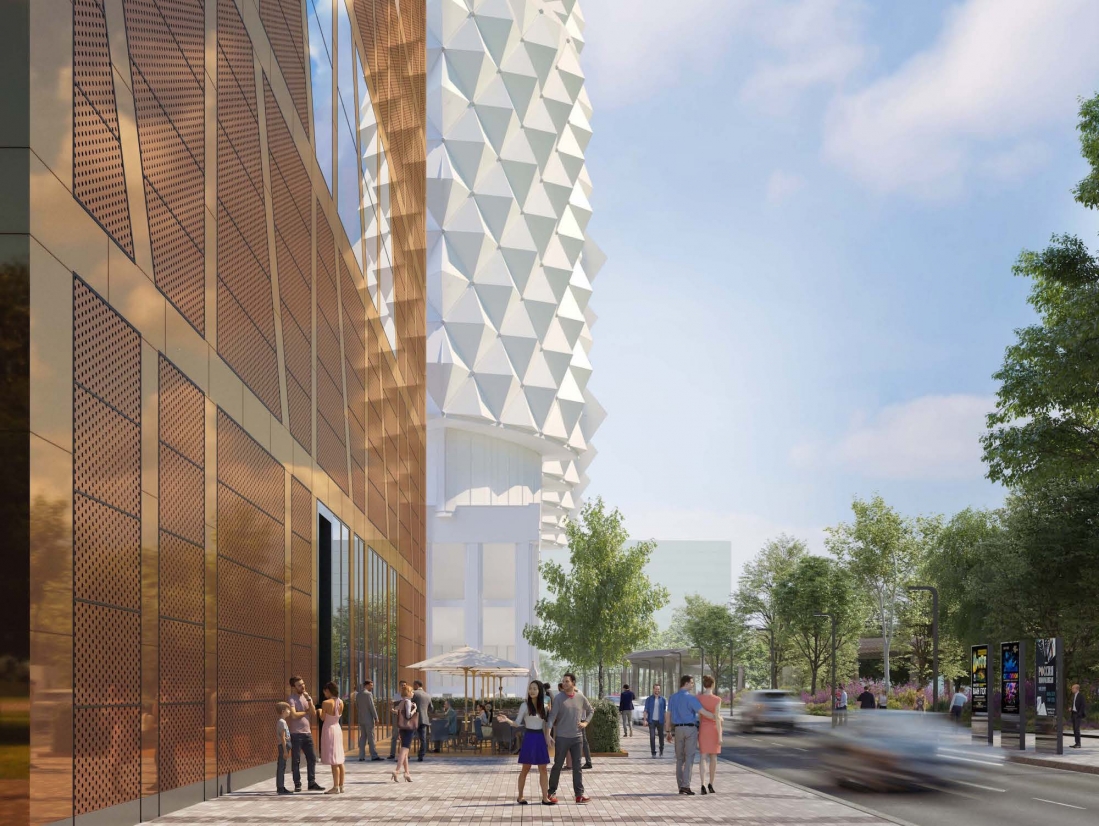 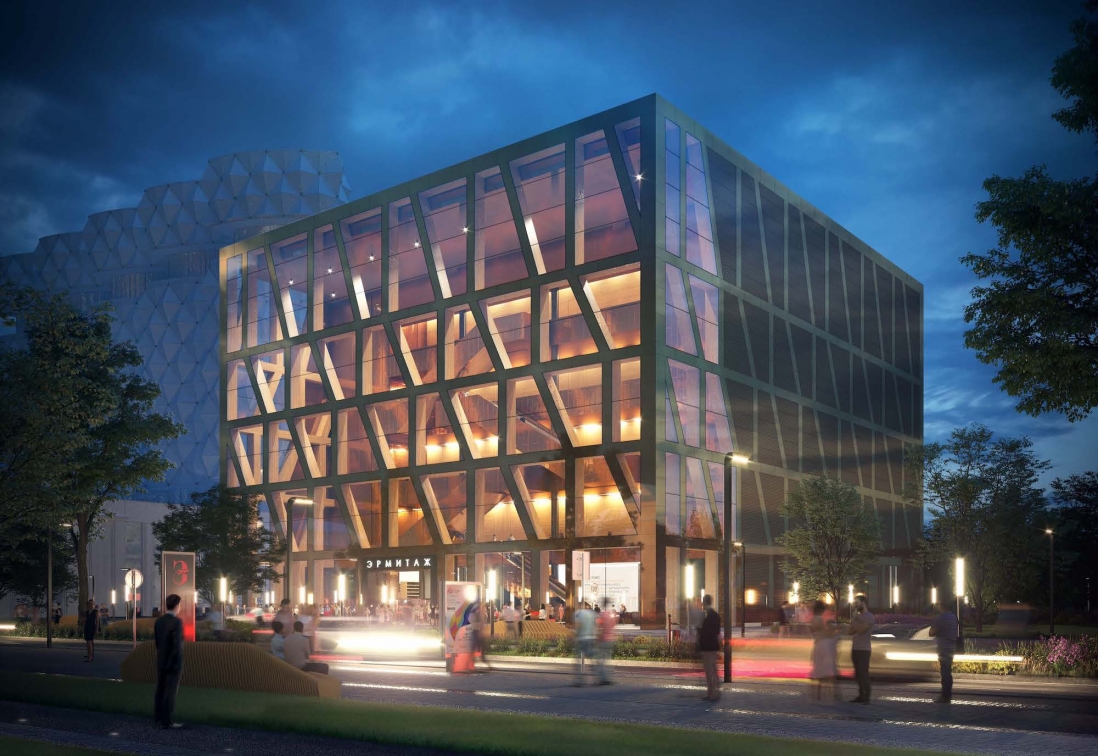 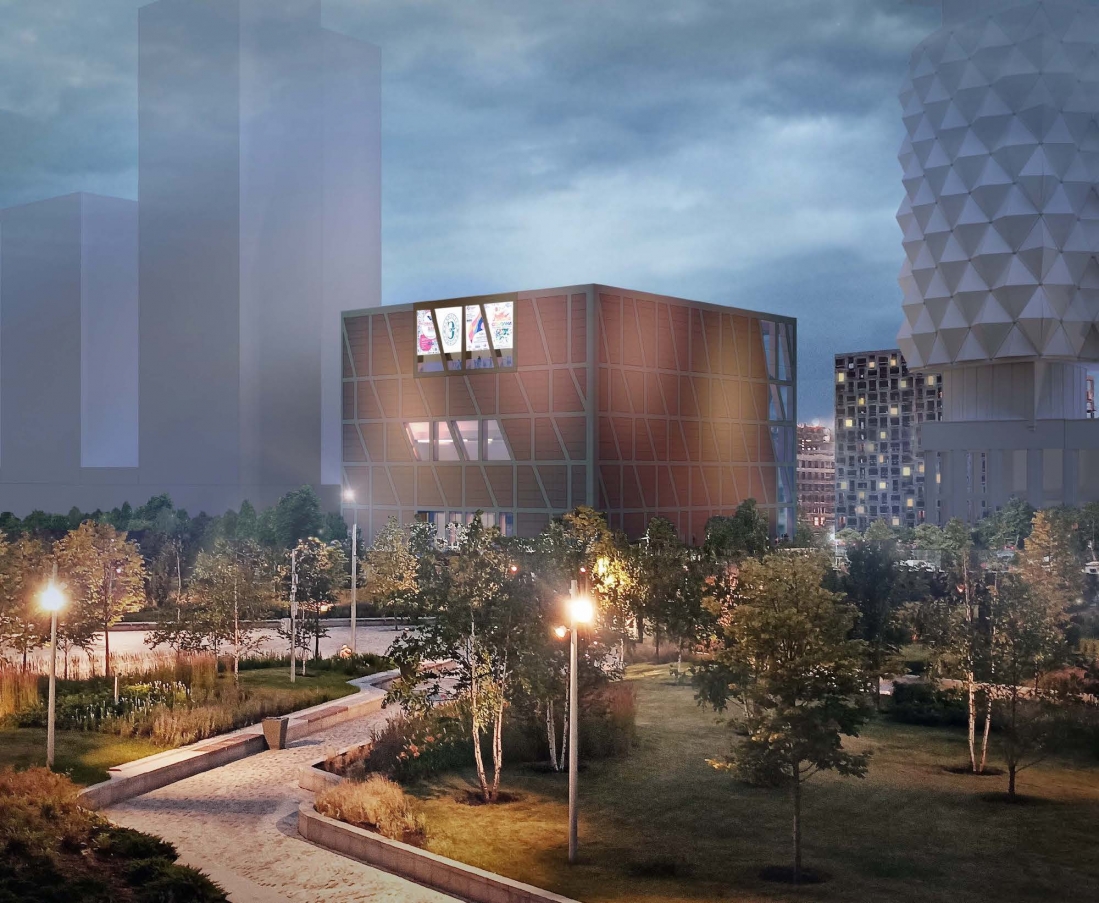 The ZIL Museum of Art has acquired its final appearance - the facades of the "cube" building will have the form of a grid of metal structures simulating copper. Moskomarkhitektura has agreed on the architectural concept made by SPEECH bureau. This was reported by Chief Architect of Moscow Sergey Kuznetsov.

The Hermitage-Moscow Museum building will be constructed at the intersection of Vesnin Brothers Boulevard and Rodchenko Street, and one of the facades will overlook Architect Leonidov Street and Tyufeleva Roshcha Park.

“The museum building will have the form of a cubic volume wrapped in a looped trapezoidal mesh made of copper-like metal cassettes. A one-story gallery is attached to it. The interior decoration of the halls is to be made of natural wood, with inclusions of concrete, glass and stainless steel elements. The total area of the complex will be about 12 thousand square meters”- said Sergey Kuznetsov.

The trapezoidal modules on the facades will be made of aluminum anodized to look like copper. On the fifth floor, in the open terrace area, there will be a pergola made of wooden structures; the rest of the terraces, distributed along the perimeter of the building, will be made of steel structures.

The museum will house exhibition halls, a restaurant, office and public spaces, and underground parking. Immediately at the entrance, visitors will find themselves in a glazed space with multi-tiered shelves, where large-sized exhibits will be placed. From the showroom, you can smoothly enter the functional part, where the reception, cloakroom, shop, conference room, interactive area and restaurant will be located. The second to fifth floors will also be occupied by exhibition halls.

The restaurant will have a custom-made interior: walls and columns will be made of concrete and finished with “copper-like” metal cassettes; a pattern of wooden elements will be formed on the ceiling.

As a reminder, the Hermitage-Moscow project was launched in March 2015, when the heads of the museum and LSR signed a protocol of intent. The project of the building was developed by Sergei Tchoban, the best architect in Europe in 2018 (SPEECH bureau). It completely satisfied the management of the Hermitage. It was decided to give up on the previous concept developed by Hani Rashid.