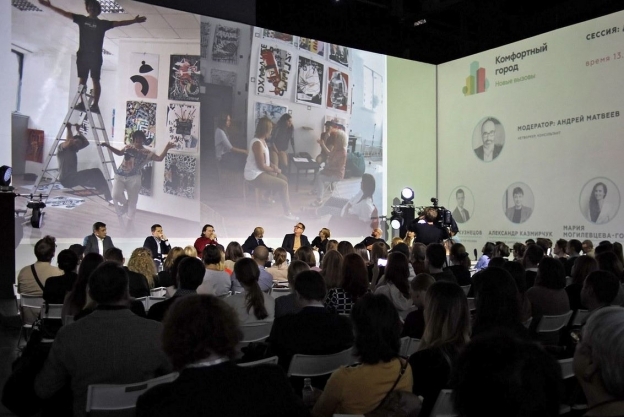 When choosing new accommodation, people pay attention not only to price/square meter ratio. Amicable atmosphere, companionship amidst residents is a competitive advantage in choice of the apartment. At the conference “Comfortable city. New challenges”, which took place on 24 October, a separate session was dedicated to good neighbourliness.

“One of the problems of the post-Soviet real estate development are microdistricts with the population over 30,000 people, creation of community of residents with such number of people is just impossible, - Chief Architect of Moscow Sergey Kuznetsov thinks: Efficient functioning of the community can be observed with the community up to 5,000 people. Planning with a net of quarters and private yards can influence the formation of the residents’ community.”

As Maria Mogiltseva-Golovina, Product Director, developer’s group “City-XXI century” told, an issue of work with the community of residents is of serious concern for the company: “We are in permanent contact with the residents, we know what they want. Primarily, it is intellectual development, master-classes, studios. Besides, people want to see that their quarter is progressing and that it is managed transparently, they want take part in its life and development. For this reason, we are forming clubs of neighbours.”

An issue of creation of residents’ community is an issue of social peace and of the factors of successful implementation of development projects. According to Alexander Kazmirchuk, General Director of Rose Group, in a residential complex Microcity “In the woods”, which the company is developing, about 30% of the buyers came on recommendations.  Significant role here plays the fact that an active neighbours’ community has been formed. “In our case, the developer promoted creation of residents’ community, - Leonid Kurashov, co-founder of the gallery of local art “Kvartina”, resident of Microcity “In the woods” shared his experience. – At first, the platforms for online communication in the social networks and offline communication were created, then the developer allocated an area for the creation of gallery. We equipped the premises, offered the local artists to place their paintings in the gallery. 90 artists provided their works. Over 500 people visited opening of the gallery. In six months we arranged seven exhibitions. Now events for children and master-classes are organized in the gallery.”

Bertil Bjork, Director of incubator for creative projects STPLN (Sweden) told about his experience of work with the interest communities. “Our company got project on restoration of former industrial building. It just so happened that shipbuilding branch had fallen into decay. In a word, we saw a site in a miserable state. There was another problem in Malmo: the skateboarders who were riding their boards all around the central streets disturbed the residents. In order to remove skateboarders from the downtown it was resolved to build a skate park at this abandoned territory. That moment we decided to get in touch with the skaters’ community. Of course, their community knew for sure what they wanted the future skate park to look like, and we obtained precise technical design specification according to the project. Now, when the skate park is completed, it turned into a center of gravity not only for the skaters’ community, but also for local schools, which are conducting their sports events there. We are still keeping in touch with the skaters’ community, they come to us with their ideas on the issue of park development. We help in their implementation. In our work with the community we are following four rules:  participation, team work, trust, culture,” – Mr. Bjork told.

The conference of Moskomarkhitektura “Comfortable city. New challenges” took place on 24 October in ARTPLAY Design Center. Its main topics were: formation of comfortable urban environment amidst restrained urban condition; good neighbourliness as a value, and also within a framework of the conference a session “Eurasian cities. Presentation of the research” will be held.