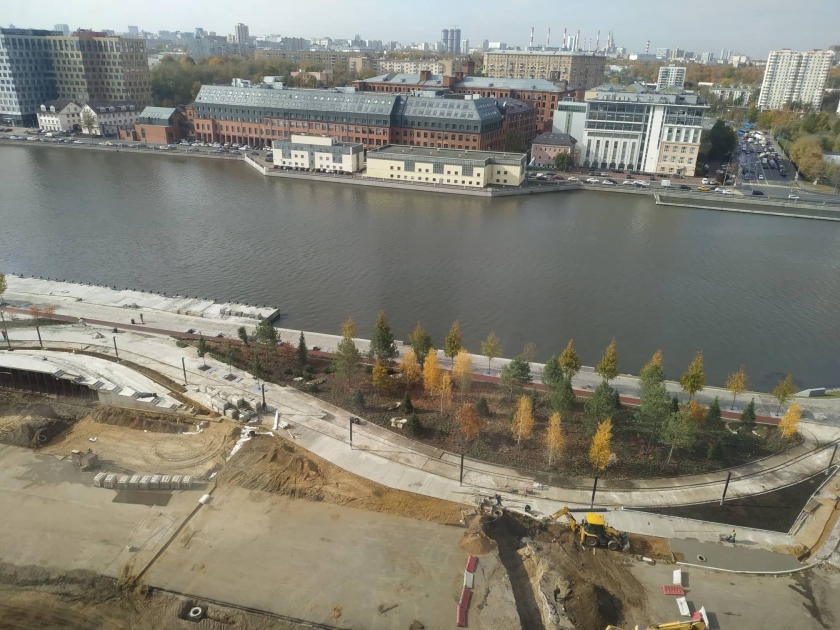 Blooming gardens will appear instead of the dismantled Starodanilovskiy Bridge next to Marc Chagall Embankment in the ZILART district. Currently the extension of the embankment has been finished, fertile soil laid and planting has started, as stated by Chief Architect of Moscow, First Deputy of Chairman of Moskomarkhitektura Sergey Kuznetsov.

The gardens with flowers and shrubs will be located at the place where the old Starodanilovskiy Bridge began. It was designed by N. Ya. Kalmykov in 1915-1916 and dismantled because of its structural deterioration in 1961, however, part of the construction remained to the present day.

"At the area of 130 square meters, where the gardens will be located, 180 metal beams and 160 vertical sheet piles were removed with a crane-boat. Then builders constructed a stone foundation and a bedding layer of gravel and sand to prevent the sliding of the slope into the water. The shore was reinforced with a geogrid and fertile soil was laid on top of it. More than a thousand shrubs and several tens of thousands of perennial flowers that grow in the Russian climate, for example, tulips, daffodils, will be planted here. As the Mayor of Moscow Sergey Sobyanin previously noted, the first part of the work to improve the embankment will be completed in November, the second - before mid-2020.", said Sergey Kuznetsov.

In total, there will be four “green” zones on  Marc Chagall Embankment with a length of 820 meters, i.e. flowering gardens, light forest with grasses and shrubs, forbs with grass and flowers exclusively, and the “Fluffy hills” zone imitating a forest. A total of 274 trees will be planted, with some “large-sized” trees reaching 7 meters.