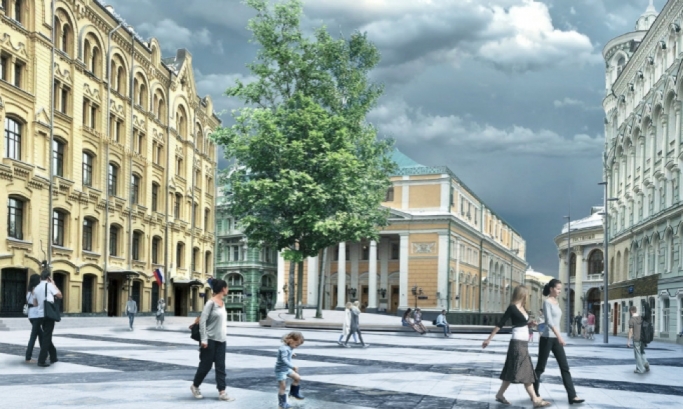 On June 19, site preparation commenced for improvement of the single pedestrian area from Red Square and the Kremlin to Zaryadye Park in Moscow. This walking route will include Rybny and Bogoyavlensky streets, as well as Birzhevaya Square, reported mos.ru.

The route will connect Zaryadye Park with Nikolskaya Street, which leads from Red Square to Lubyanka Square and had been closed to vehicles since 2013. It will become the main walking area for citizens and tourists who are heading to the park from Ploshchad Revolyutsii Metro Station.

Repair work and replacement of utility systems at Birzhevaya Square, as well as in Rybny and Bogoyavlensky streets have just been started. These preliminary works are required before the large-scale improvement project under the My Street Program. The construction sites will be fenced by special protections. Temporary wooden decks with ramps and sloping sections will be installed for pedestrians. Utility companies will replace gas and water lines and dig underground cable tunnels where all the wires will be removed.

Only after that, the main construction work under the My Street Program will begin. Curbstones will be put there, the area will be paved with large granite slabs, new street benches and energy-saving lamps will be installed.

The final stage of the improvement project for Birzhevaya Square, Rybny and Bogoyavlensky streets includes tree planting, which is scheduled for autumn.

The streets are not planned to be closed off during construction, as they are seldom used by cars. After repair works,  Rybny and Bogoyavlensky streets, despite the expansion of pedestrian space, will have a road for: special-purpose vehicles, cars that deliver goods and products to the local cafes and shops, cars of the citizens who live and work in these streets, taxi, vehicles of people with disabilities and their carers. The pavement of pedestrian space in the streets will be almost the same level with the road.

Birzhevaya Square will consist of only pedestrian space — there will be a fountain and benches under the shady trees. Birzhevaya Square is one of the few small intimate squares of Moscow. It will become the heart of the new pedestrian area. Our goal is to make it a landmark of the historic district Kitay-gorod. In the center of the square fountain is to be installed.

Let us recall that the main works on the improvement of Zaryadye Park and the surrounding streets is scheduled to be completed for Moscow City Day. Last week the fence around Zaryadye Park was removed. Formation of landscape park zones, construction of the floating bridge and the ice cave are nearing completion.