Bridge in Nagatinsky Zaton Will Have Shape of Crescent 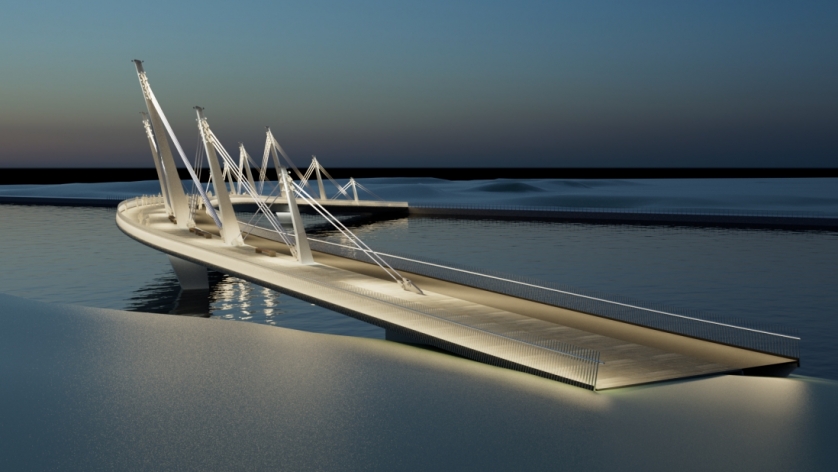 A new 240-meter-long bridge in Nagatinskiy Zaton will be made in the shape of a crescent. It will be constructed on the principle of engineer Fink’s truss. Warm architectural lighting completes the look. This was told by Chief Architect of Moscow, First Deputy Chairman of Moscow Committee for Architecture Sergey Kuznetsov.

"The characteristic structure based on engineer Fink’s truss principle creates a bright architectural image, and the warm architectural lighting of the structures and the canvas in the evening adds a feeling of comfort. It looks like a crescent hanging over the waters of Nagatinsky Zaton,« said Sergey Kuznetsov.

«The construction of the bridge will make it convenient for pedestrians and cyclists to move from the Nagatinsky Zaton station under construction on the Big Circle Line of the metro to the existing and planned buildings of residential areas. At the moment, the territory planning project has been approved,» Sergey Kuznetsov added.

To emphasize the expressiveness of the bridge, the concept of delicate lighting of the main structural elements was developed. The tops and bases of the masts, as well as the supporting plinths under the deck, are emphasized by direct light. Lights embedded in the handrails along the entire length of the bridge accentuate the curve of the bridge and form a continuous composition.

In addition, they illuminate the bike path and pedestrian area without the need to install lampposts that create additional obstruction. And the reflection of light in the water greatly enhances the effect. The concept and history of the «Fink truss» goes back to engineer Albert Fink, who first developed this structural system for railway bridges. Its essence lies in the fact that the upper beam rests on vertical masts, which themselves are suspended on tension rods. Masts and tension cables support the deck and create a permeable separation between the pedestrian area and the bike path.

In addition, the central space can be used as a public area with benches. The width of the cycle lane will be 3 meters, and the pedestrian zone — 4.25 meters. The height of the bridge space excludes the possibility of navigation under it, while at the same time it allows arranging a comfortable entrance to the bridge from the embankments for residents, including people with limited mobility. Earlier, Moscow Committee for Architecture presented the architectural concepts of seven bridges, which will become the new symbols of the city. Four of them will be located in Khoroshovo-Mnevniki, and three more in Filevsky Park, Nagatinsky Zaton and Yakimanka areas.

Learn more about the design and installation of the bridge A structural feature of the Fink truss is the absence of a continuous lower chord. Instead, mast heads are always connected to adjacent mast legs and vice versa. When designing the Nagatinskiy pedestrian bridge, the original design of the Fink truss was turned upside down. In addition, excess diagonals connecting the second and subsequent masts have been omitted. Structurally, the general scheme of the Fink truss can be understood as the imposition and repetition of similar modules. The loads acting on the surface of the flooring are transferred from it to the cables. The cables themselves are suspended from the masts. Starting from the center of the bridge, the loads are always transferred from one module to another until they are transferred to the base via the central masts.

Following this distribution of forces, the height of the masts and the number of cables and their diameters increase accordingly. Since all truss modules (plating + shrouds + mast) are triangles, they are stable on their own, which makes staggered cantilever mounting possible. First, concrete supports are installed in the backwater area, then the main masts and side spans are erected. The gap between them is closed by the central part on the pontoons. The masts will be made of steel, also with the use of fully enclosed steel cables (FLC), which are most efficient in transmitting high tensile forces. The built-in FLC protective layer guarantees durability and low maintenance requirements. The steel welded hollow box section provides rigidity against vertical deformations, and its main load-bearing function is to absorb torsional loads. An asphalt coating will be applied as a finishing layer.