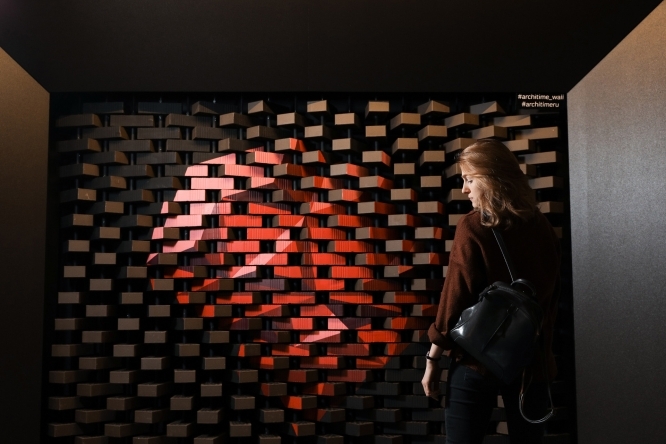 Using the dynamic wall technology from ARCHITIME design group, a vivid visual effect is achieved. A fixed wall made of real brick comes to life and imitates the movement of fabric. Authors: Grigoriy and Maria Malitsky.

The technology of the dancing wall is presented as an installation and was first shown at the BIF architectural festival in Moscow. The architects faced the task of tying together the theme of the Theater year in the Russian Federation and the theme of “Love”, which the authors got by drawing lots during the preparation for the festival. That is why a red heart appeared on the installation, designed and applied by Moscow street artist Alexei Kio. The movement of the wall is accompanied by the sound of a heartbeat, and putting your hand to the living wall, you can not only hear, but also feel the beat of the heart.

The art object was called the “One Wall Theater” or “The Moving Wall” thanks to the plastic movement that resembles a flying flag.

Immediately after the festival, the art object was installed in the Skolkovo transport hub, becoming the center of attraction of the futuristic space of Orbion. Official installation hashtags are #architime_wall, #dynamicwall and #сердцеорбиона.

Zivert and Philip Kirkorov shot their video for the song “Life” against the background of the installation.

Bricks are strung on rotating rods at a specially calculated angle. During rotation, the complex dynamic plastics of the wall are created, and the image smoothly appears. The installation weighs more than a ton due to the use of real brick. Despite its impressive weight, power consumption is minimized. The art object can be powered by solar panels. The design developed by the ARCHITIME design group is made in such a way that it is driven by an electric drive similar in power to the drive of power windows in an ordinary car. The technology is patented by the authors.