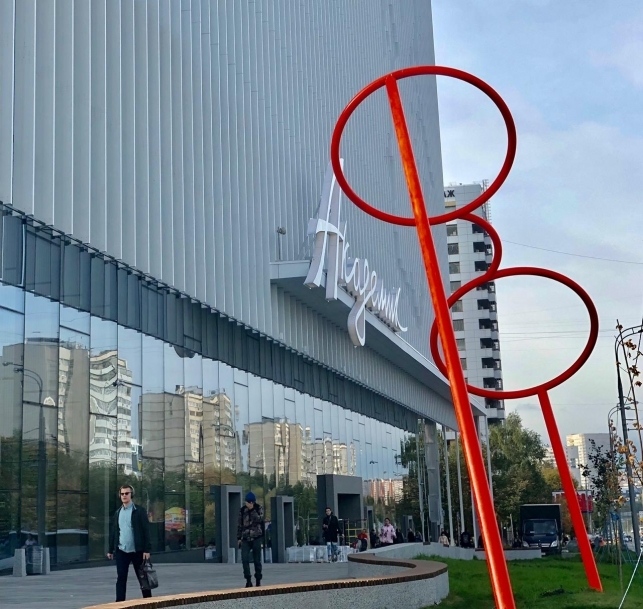 Akademik Business Center designed by UNK project became a laureate of Proestate & Toby Awards 2019. The project was the winner in the A-Class Business Center category. The results were announced on September 20.

The Proestate & Toby Awards competition is held by the organizing committee of the Proestate real estate investment forum and the American Building Owners and Managers Association (BOMA International) with support from the Russian Guild of Property Managers and Developers (NP) and Moscow Investors Association.

The building which fades into space - that is the answer that architects found to what architecture is as an art, which has always striven to incarnate contemporary ideas and the vision of the world.

The expression of the building is not based on its mass, but its dematerialization. The main part has the form of a lens, which creates an aerial surface, a kind of screen where, as you walk along the avenue, the image of the famous Russian scientist Vladimir Vernadsky appears and then fades again.

"The unusual form of a lens has let us meet a few challenges altogether. With this height and length, the regular block would look very heavy, it would dominate the surroundings. The form we created helped us make the complex lighter and open the view of the neighbouring commercial building without affecting its insolation. The semicircle facing the inside of the city block makes you think of the dialogue between them. The solution has also let us create almost perfect conditions for the rooms in the ends of the building. There is a lot of light there, so they stand out among the other rooms", says Yuliy Borisov, head of UNK project.

Located in an academic part of Moscow and surrounded by wonderful models of soviet modernist architecture, the new building is the high-rise centerpiece of the district, however, the suggested form does not dominate its surroundings, but creates their new modern identity.

The rectangular foundation of the 14-storey lens forms the outer view of the building. The high ground floor with huge windows is closely linked with the city view. It will accommodate shops, cafés and entrances to all functional areas. The tall massive building looks light because of the vertical aluminum lamellae which partly spread onto the foundation visually combining the parts of the construction. The picture of the great scientist appears on the facade because of the different sections of the lamellae and can best be seen by drivers and pedestrians from the other side of the avenue.

The landscape of the pedestrian street along the main facade also reminds of the image of Vladimir Vernadsky, or rather his glasses, which have become an art object and the identity element of this area connected with the building.