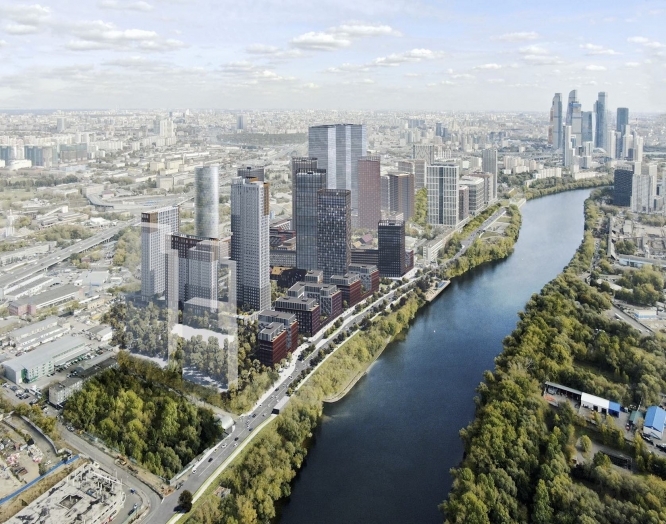 According to the territory planning project, the industrial zone in the Khoroshevo-Mnevniki district in the north-west of Moscow will be reorganized and landscaped. This was announced by Chief Architect of Moscow Sergey Kuznetsov.

“The residents of the district will have a comfortable urban space for work and leisure in the immediate vicinity of the Presnya metro station, which is under construction. As part of the comprehensive implementation of this project, it is planned to build a modern residential quarter and social infrastructure facilities: a kindergarten for 350 children, a school for 775 children, a school stadium and a multifunctional complex with a built-in clinic and a fitness center “, added the chief architect.

The project was developed by the Genplan Institute of Moscow together with Architectural Bureau Ostozhenka.

The proposed development should become a single visual ensemble with the Moscow-City Moscow International Business Center, form a new urban skyline in the Big City and other high-rise complexes under construction on the banks of the Moskva River. The concept of residential development involves the creation of a private territory and closed courtyards without cars. On the ground floors of the houses there will be cafés, pharmacies, dry cleaners, shoe repair shops and everyday services. Convenient cycling routes with bike sharing stations will also appear in the area.

An important part of the project is measures to preserve nature protection zones and green areas: Natural-Historical Park “Moskvoretsky”, and the rehabilitation of the natural complexes of the Tarakanovka River and the boulevard along the Karamyshevskaya Embankment. In addition, new landscaped areas of 1.36 hectares will be created and improved on the reorganized territory.

From April 27 to May 10 2020, residents of Moscow will be able to participate in electronic public discussions on the project for the planning of the territory limited by Shenogin Street, the channel of the Moskva River, Projected Passage No. 3700, Zvenigorodskoye Shosse, 3 Magistralnaya Street, Projected Passage No. 630, as well as on the draft amendment of the land use and development rules for the Khoroshevo-Mnevniki district. All participants in public discussions will be able to make their suggestions and comments on this project on the Active Citizen website in the respective section.