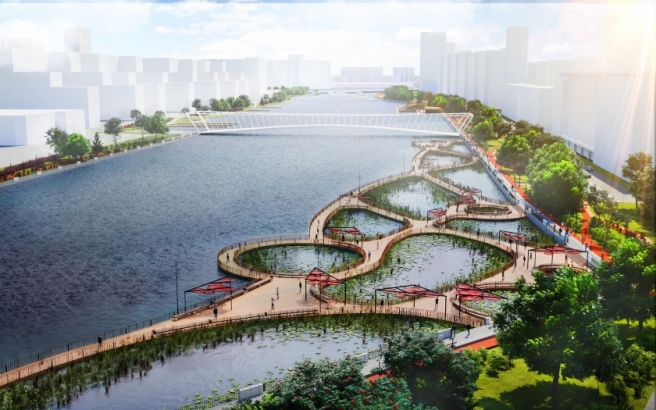 The green space of the Marc Chagall Embankment in the Zilart quarter will be complemented by a garden on the water. According to Chief Architect of Moscow Sergey Kuznetsov, in the process of its creation, several water basins will be filled with plants. These will be fenced off sections of the river of different shapes.

The concept for the new urban area was developed by the Genplan Institute of Moscow in partnership with Asadov Bureau. Visitors to the park will be able not only to go to the river, but also to “enter” it along the floating pontoons. Thus, the water area of the old riverbed will become part of a single landscaped area of the embankment, and the floating garden will decorate its walking area.

“For the convenience of vacationers, it is planned to build two large observation platforms with a view of the Moskva River between the basins, as well as equip recreation areas with benches, gazebos and drinking fountains. Also, the garden on the water will be securely fenced in the style of the embankment. Its concept refers to the avant-garde art direction,” said Sergey Kuznetsov.

It should be mentioned that it is planned to open a spa center, three outdoor swimming pools and a recreation area with changing rooms and showers as part of the complex of coastal facilities on the embankment. The dominant feature of the route is a 150-meter amphitheater facing the river, which can accommodate up to 4 thousand people. This is a place unique in terms of its species characteristics, comparable to the amphitheater in Zaryadye.