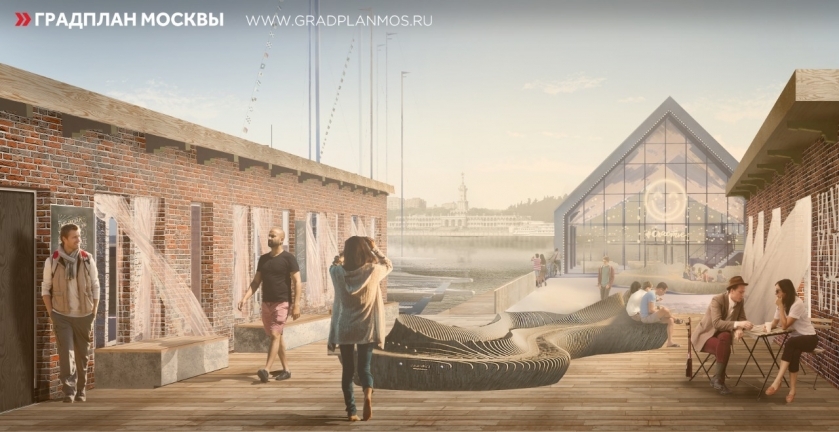 New public centers, a beach, an amphitheater pier and a comfortable area for sports and family recreation may appear in the coastal zone of the Khimki water basin. This was announced by Chief Architect of Moscow, First Deputy of Chairman of Moskomarkhitektura Sergey Kuznetsov.

The arrangement of the bank of the Khimki water basin is provided by the Scheme for the Development of Public Space along the Moskva River and Adjacent Territories, which, on behalf of Moskomarkhitektura, was developed by GAU Research and Development Institute of Urban Planning of the City of Moscow (Gradplan).

According to Sergey Kuznetsov, Gradplan studied the urban planning situation in detail and presented specific proposals to open embankments near the Khimki water basin, on the Shchukinsky peninsula, near Zhivopisnaya Street, as well as in the Saburovo district for residents and guests of the capital.

“Now public spaces in these areas are either underdeveloped, or are in disrepair, or are completely absent,” noted Sergey Kuznetsov. “Meanwhile, this territory has huge, including recreational potential. The Khimki Reservoir Embankment can become a comfortable resting place by the water and a powerful sports core for residents of the neighboring districts. Reconstruction of hangars into sports, shopping and entertainment centers will delight lovers of an active lifestyle."

The main goal of the project is to create a comfortable and safe recreational area attractive to all groups of the population, and first of all to residents of adjacent residential areas in the Severnoe Tushino and Yuzhnoe Tushino districts.

“When designing the territory, the specialists of the institute took into account the history of this place and proposed a solution that would preserve the natural landscape of the embankment in the process of its improvement,” said Dina Sattarova, director of the GAU Research and Development Institute of Urban Planning of the City of Moscow. “Thanks to the comprehensive reorganization of the Moskva River bank in the Khimki water basin area, the number of public spaces of various purposes will increase to meet the needs of residents for various forms of leisure. The creation of convenient pedestrian and cycle links will make this area more permeable and comfortable.”

It is assumed that the entire area of 16.53 hectares will be divided into several functional zones, including sports, beach, hotel and entrance areas.

In addition, community centers are planned to be organized in the coastal zone of the Khimki water basin. One of them is proposed to be placed at the central entrance of the Yacht Club. In addition to a bike rental point, a bicycle parking, a baby care room, a stage with a small ground, lawns, the project provides for an amphitheater pier, which will provide visitors with access to open water and at the same time open a panoramic view of the river and the North River Terminal ensemble.

The second center is a public space located near the southern entrance group at the Buran pier, where an observation deck, a bicycle parking and a navigation stand with a WiFi access point are also planned.

“It is proposed to form the sports zone by reorganizing the wasteland to the south of the Yacht Club and renovating the facilities of the Trudovye Rezervy Sport Complex, and the sunbathing area - on the site of the existing spontaneous beach. The project provides for a comprehensive improvement of the territory, which includes not only cleaning the bank, installing permanent sun loungers and sunshades, but also creating a bicycle parking for 15 places, as well as an amphitheater overlooking the North River Terminal," added Sergey Kuznetsov.