The star of world architecture, Japanese architect Kengo Kuma presented to the Architectural Council of Moscow his first project in the Russian capital — high-rise residential complex on Kutuzovsky Prospekt.

The residential complex on Kutuzovsky is not just an object by the “star” architect; according to the Architectural Council, it will be the first urban planning experience for Moscow executed in the form of superstructures rather than separate buildings, and also the avant-garde concept of combining public spaces by means of an open courtyard through which a wide promenade leads to the riverside.

Kengo Kuma presented the artfully made, holistic concept of the environment, which, despite being unusual, could become the model example to “deal with” the riverside. 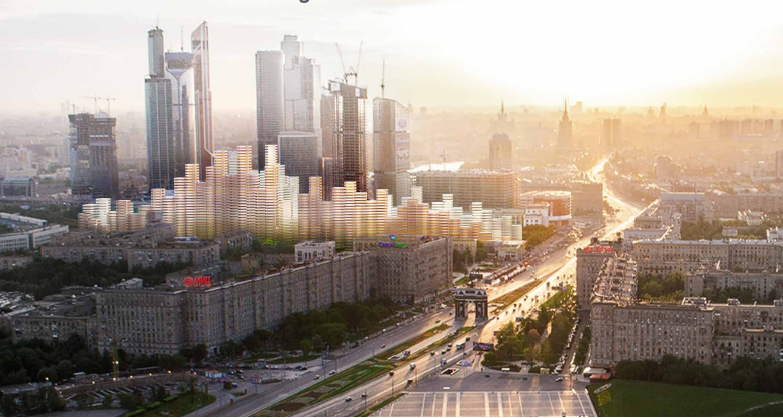 As noted by the Chief Architect of Moscow and Chairman of the Architectural Council Sergey Kuznetsov, Kengo Kuma is one of the best architects in the world, and it is fortunate, therefore, that such masters want to work in Moscow.

“Moscow is turning not only into a city of ideas and discussions, but it’s becoming a city of realized architectural ambitions and plans, which is extremely important in the context of the international reputation. International projects like Zaryadye Park and Sberbank’s Technopark in Skolkovo Innovation Center are in the process of being implemented. The members of the Architectural Council have unanimously supported the project on Kutuzovsky Prospekt by Kengo Kuma & Associates. A very elegant solution was proposed, which is very important for our city”, said Sergey Kuznetsov. The facades of the complex will be made of matte anodized aluminum, which will reflect the light and create an effect of lightness and transparency. The total area of the complex is 360 thousand square meters. Public spaces will also be created in addition to housing and social facilities. Furthermore, the project involves the first basement floor with parking and a small indoor garden.

In an exclusive interview to the Architectural Council, the master explained why he decided to build in Moscow:

Archcouncil: Why have you decided to work here? What are you interested in?

Kengo Kuma: The location of this project is very important for Moscow, because it’s near the Moscow River, which is the new center of activity in Moscow. The aim of the project is to combine the big boulevard and the riverside; and it can change dramatically the urban environment of the location. The Moscow Government approved the unified urban development concept of the Moscow River’s adjacent territory. What challenges are development projects facing, which, like yours, will be implemented on the riverside? And what benefits can they bring to the city?

In the XX century the riverside and city life were totally separated. On the riverside there were factories or warehouses — those houses block the river from the city. But in the XXI century people would like to enjoy the nature of the river. In Japan we also have the same program: the nature, a river or ocean, and a city have been separated by industrial buildings for a long time. In Europe people face the same problem — when buildings have broken the nature and the city. What do you think about the trends that were demonstrated at the present Architectural Biennale in Venice: simplification of shapes, cost reduction, single use policy? What’s your forecast for the future?

Now the relationship between society and architecture is changing, as society is very often critical to the cost of the building, and also the environment has become very important. In that new situation the architects should find a new way of creating their character; as still a strong character is very necessary for architectural design. But at the same time the cost, environment and global warming effect have become very-very important. And we should find the meeting point of these requirements. Do you think that the competence of modern architect is changing?

In this project we are designing the riverside; we even use simulation of wind flows to create the most comfortable environment. This work can be a good example of integrating the two kinds of technology.