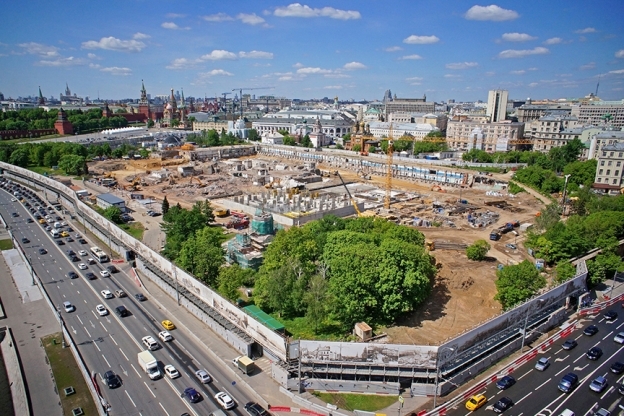 The construction of a new landscape in Zaryadye Park has been started; and soon the installation of the lightweight “floating” bridge will commence.

Due to the fact that the building works on the site are carried out around the clock, the construction of the underground parking and foundation of the Philharmonic Hall that seats up to 1.5 thousand people has been almost completed. And soon the bridge construction on the embankment will begin. It will be a 70-meter V-shaped viewing platform. The light construction will hang over the water; people can get there directly from the park with the help of a glass elevator.

The perimeter bridge fencing will also be transparent, and, as noted by Sergey Kuznetsov, Chief Architect of Moscow, the viewing platform is sure to become a new tourist attraction. ‘It is a very complicated project, firstly, because of its location — opposite the Kremlin, rather than because of its technical features. We managed to get approval for this project in such a short time due to the personal contribution of Mayor Sergey Sobyanin,’ said Kuznetsov. Also, it was decided to build the passenger quay not far from the park. ‘We decided not to locate the quay near the “floating” bridge, as it would overload the space and put an end to its promenade function. The quay will be opened in 200-300 meters from the park,’ said the Chief Architect.

As far as the main issue is concerned, planting of vegetation in Zaryadye is reported to be started in the autumn. This year there will be 516 deciduous and coniferous trees in the park. The second planting is planned for the next year. Then 270 trees, 6630 shrubs and 718.7 thousand of perennial flowers will be planted.

We shall remind you that the 10.9-hectare Zaryadye Park is being constructed on the site of the demolished Rossiya Hotel. The author of the project concept is the international consortium led by architecture studio Diller Scofidio + Renfro. The architects won the open international competition held with the support of the Moscow City Architecture Committee in 2012. Zaryadye Park is expected to be open in 2017, and the Philharmonic Hall in its territory — in 2018.