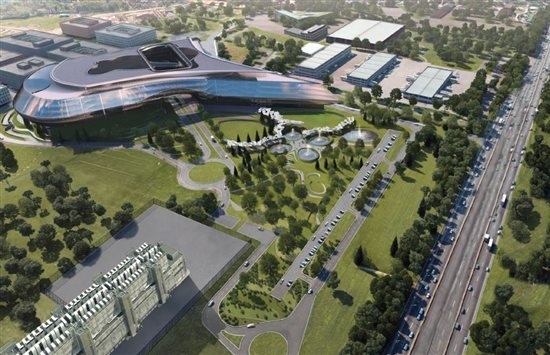 Head of the Sberbank Technopark Project Manuela Gatto and Lead Architect Eider Fernandez presented to the Urban Planning Council of Skolkovo an elaborated version of the project, with which Zaha Hadid Architects won the international bid this year.

The project of Technopark now has a redefined transport layout with reference to the layout plan of the Innovation Center. The design team also made research on the opportunities of transforming the object with elaboration of the functional requirements.

The architects demonstrated new approaches to the organization of the internal space of the Technopark, which will be divided into separate islands or nuclei. The ceiling height will be over 6.5 meters. “The uniqueness of the project is largely tied to the author’s name — this will be the last project on which Mrs. Zaha Hadid worked personally, — said the Chief Architect of Moscow and the Chairman of the Skolkovo Urban Planning Council Sergey Kuznetsov. — The facility will present a completely new format of the working space fully subordinate to the specific function of an IT technopark. It will be high-tech, and, at the same time, memorable and even a landmark in the entire structure of the innovation city”.

Further development of the project, according to the recommendations of the Urban Planning Council, will be related to the urban planning solutions. So, given the proximity to the Southern District of the IC, the facade facing the interior of the city will be further elaborated. On the ground floor, there will be public areas; and the landscape solutions will be integrated into the environmental planning structure.

In the concept by Zaha Hadid Architects, the Technopark is a sculpture building forming a non-linear terminal arch over the main boulevard. Two-part ‘central hub’ serves as the communication module of the compound and operates as an exhibition and an executive unit. The interiors are transformable and mobile, it is planned to make the building horizontally and vertically pass-through.

The project was coordinated by the Department of Urban Planning Regulation of IC ‘Skolkovo’ and the Chief Architect of Skolkovo Anna Turgeneva*.