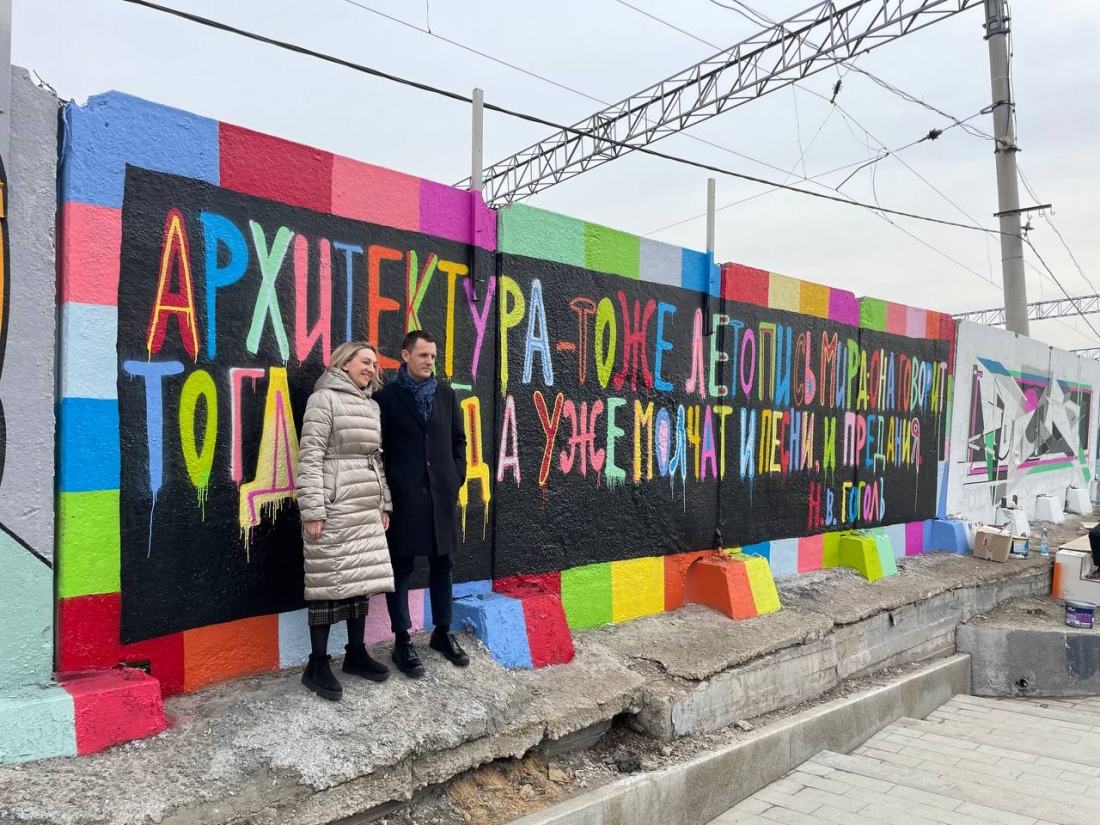 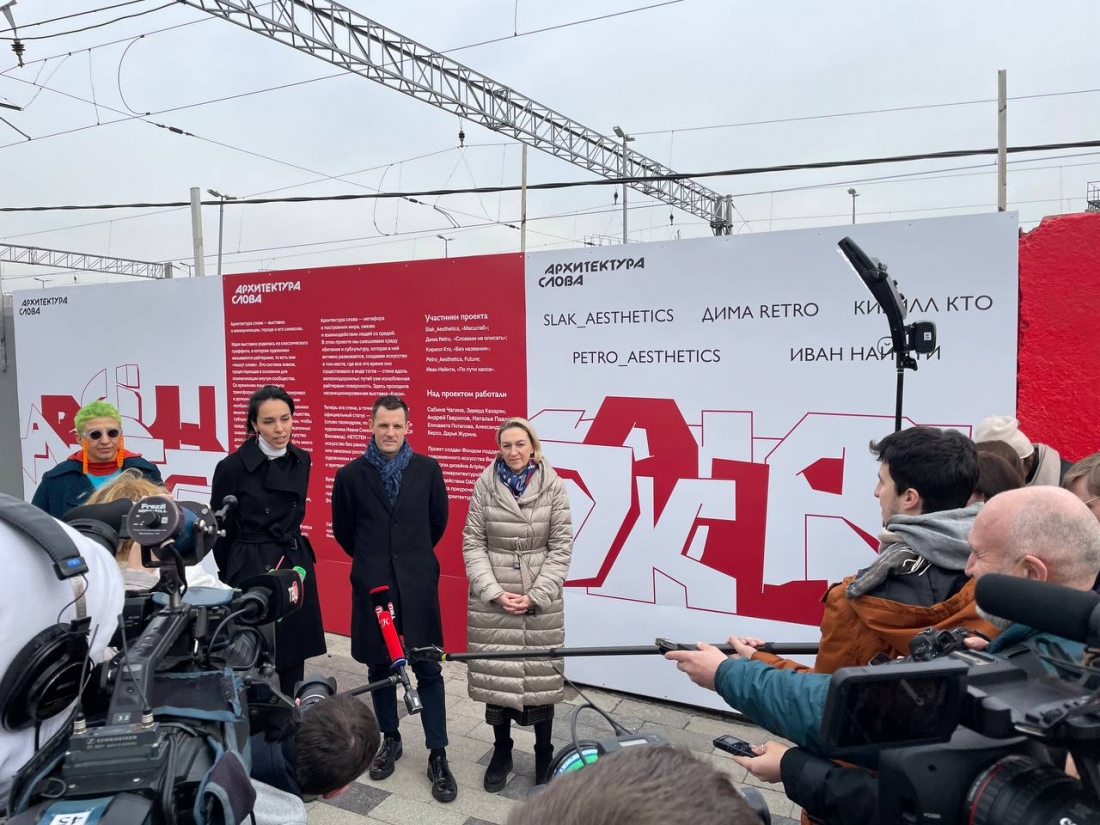 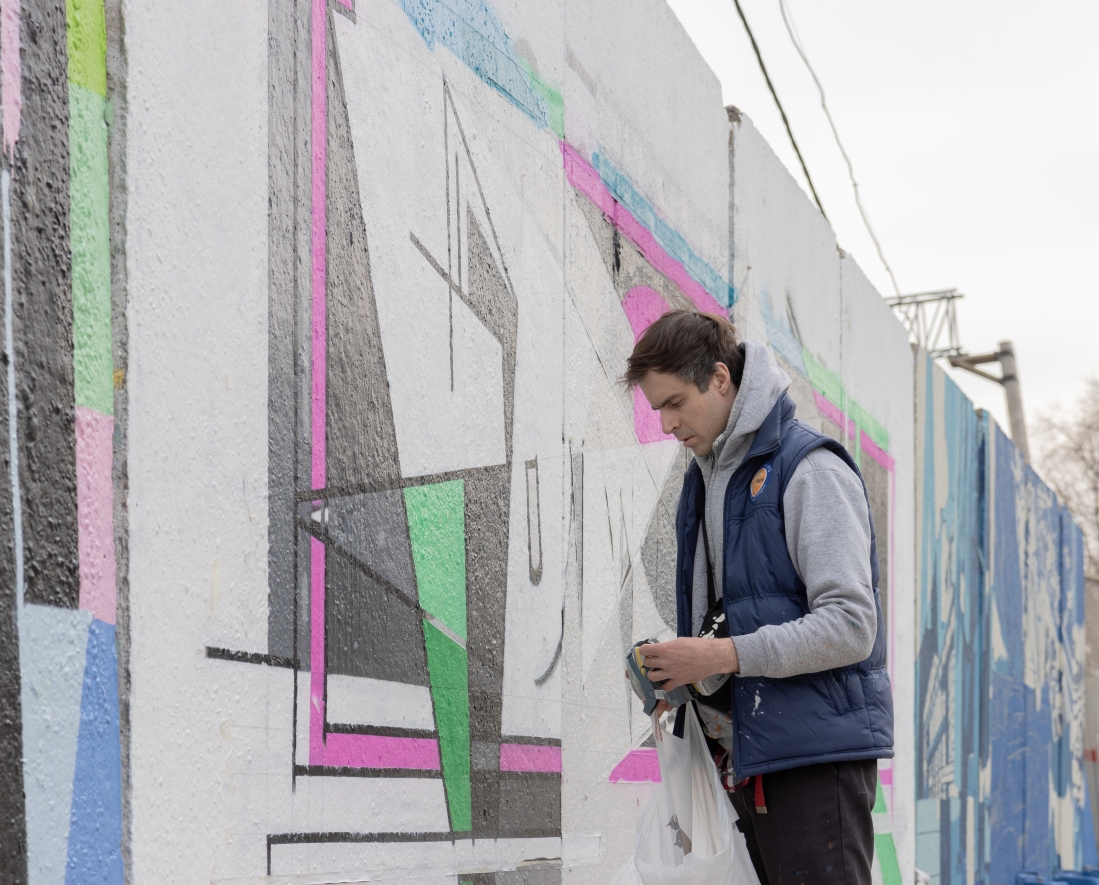 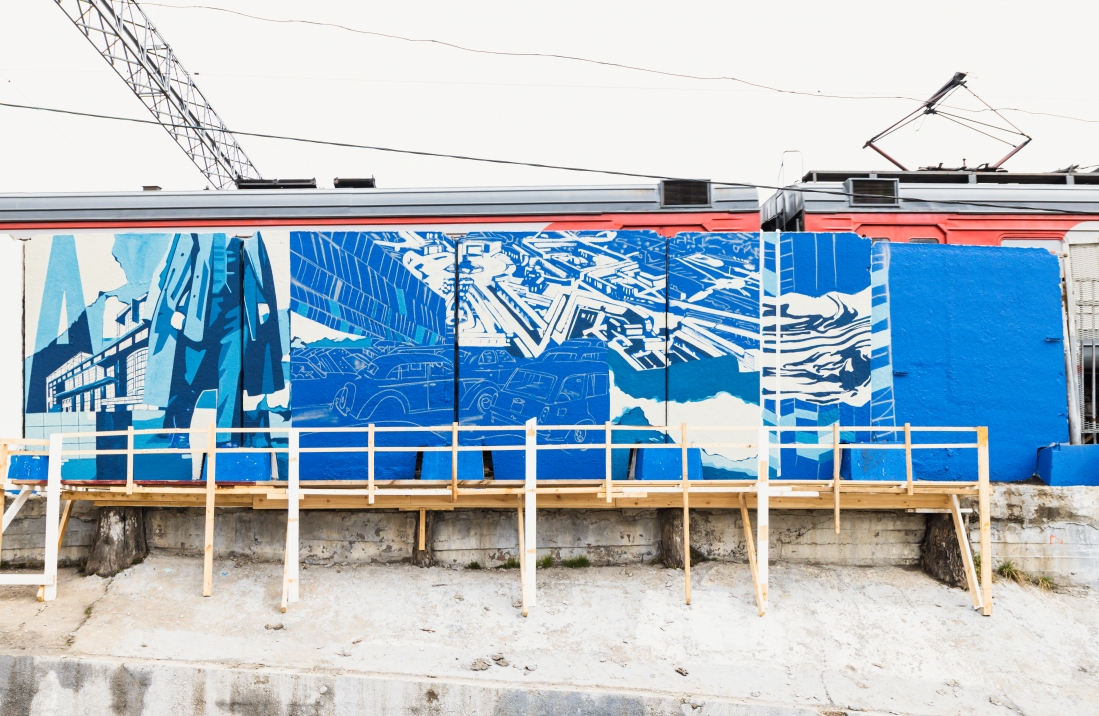 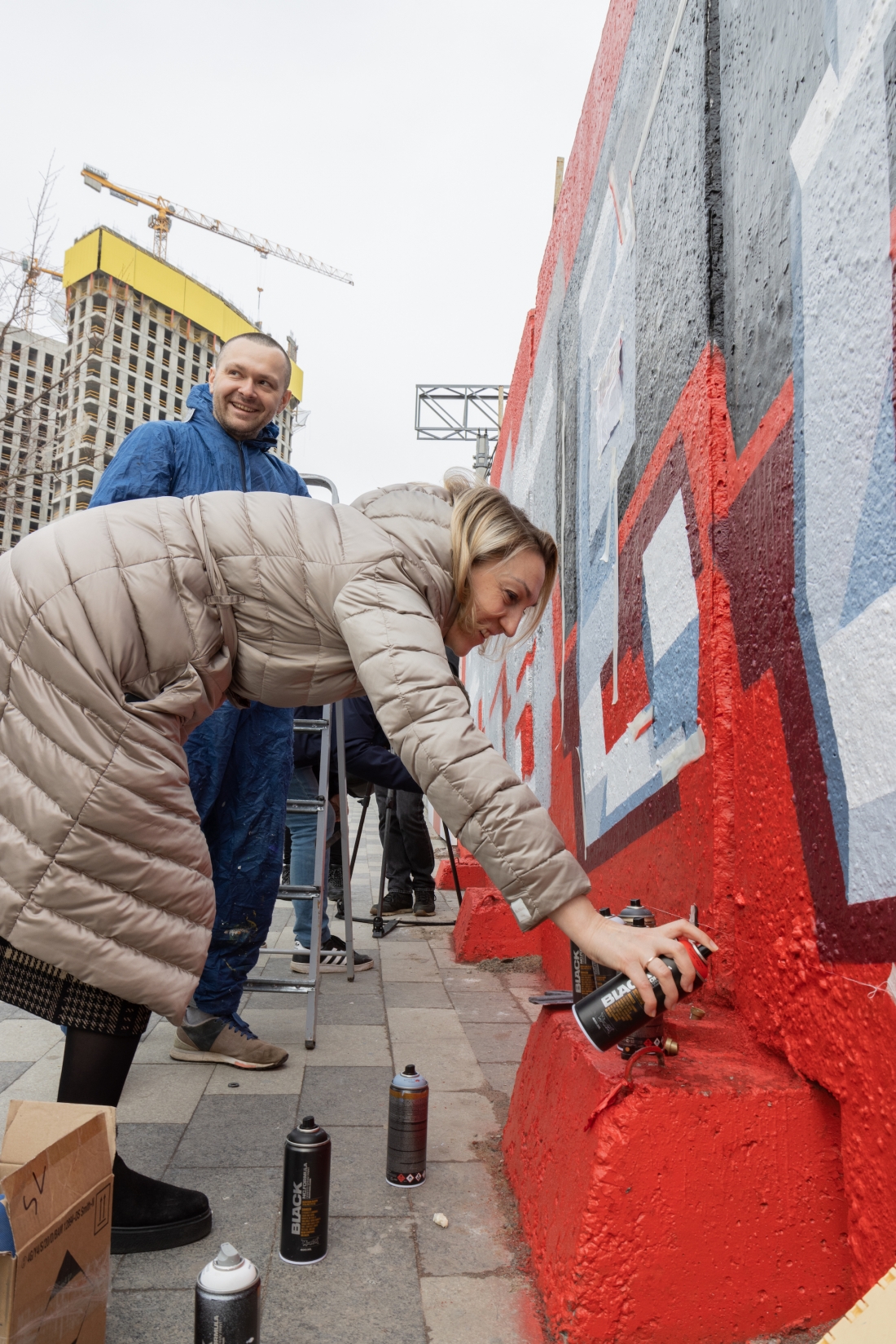 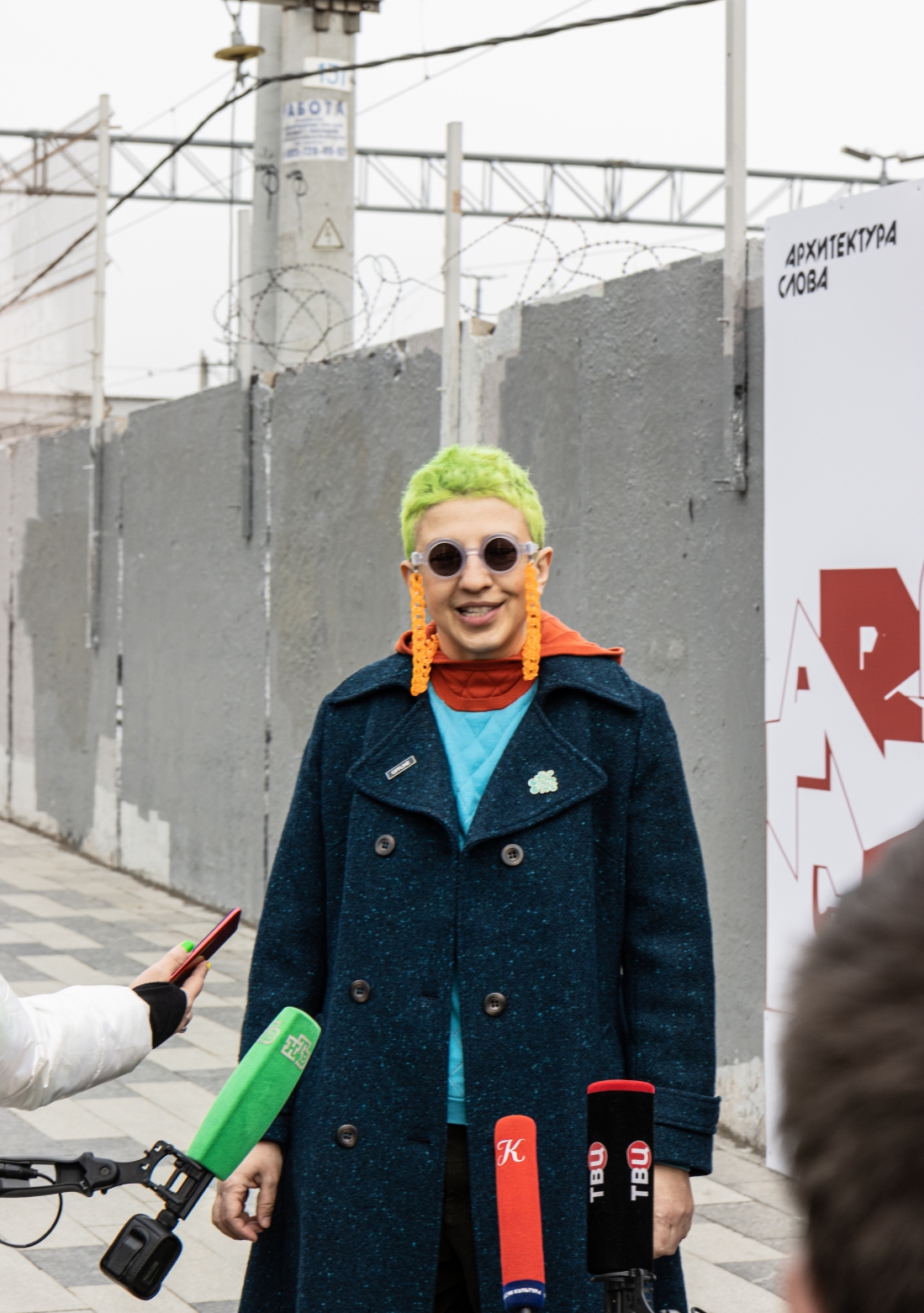 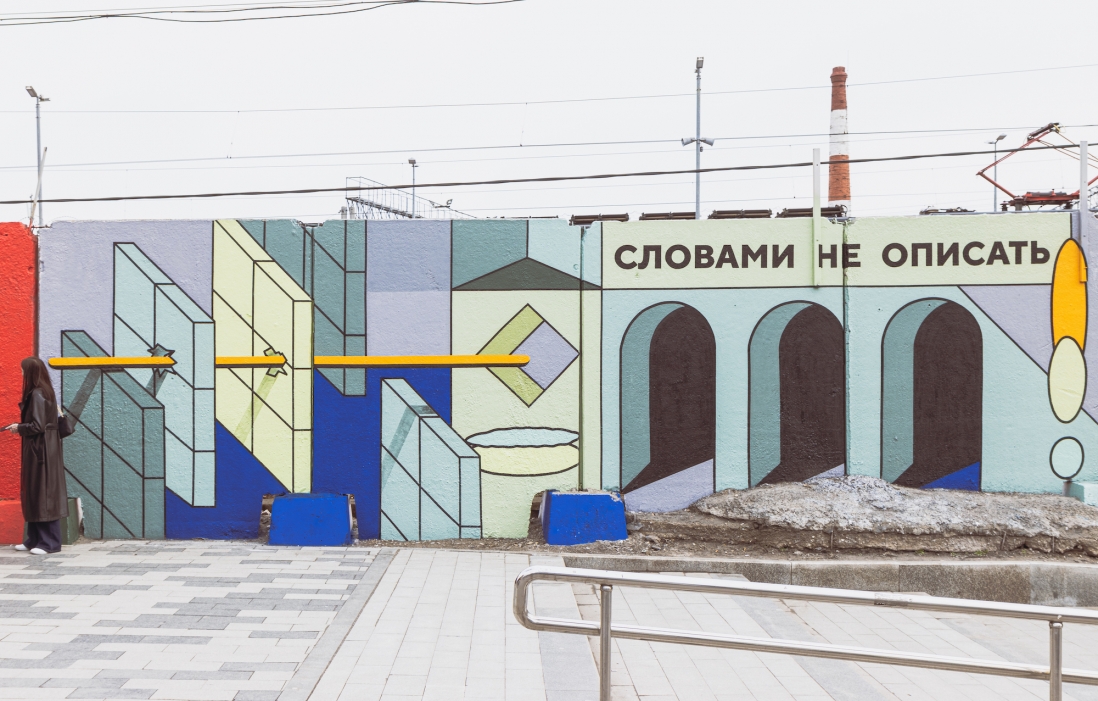 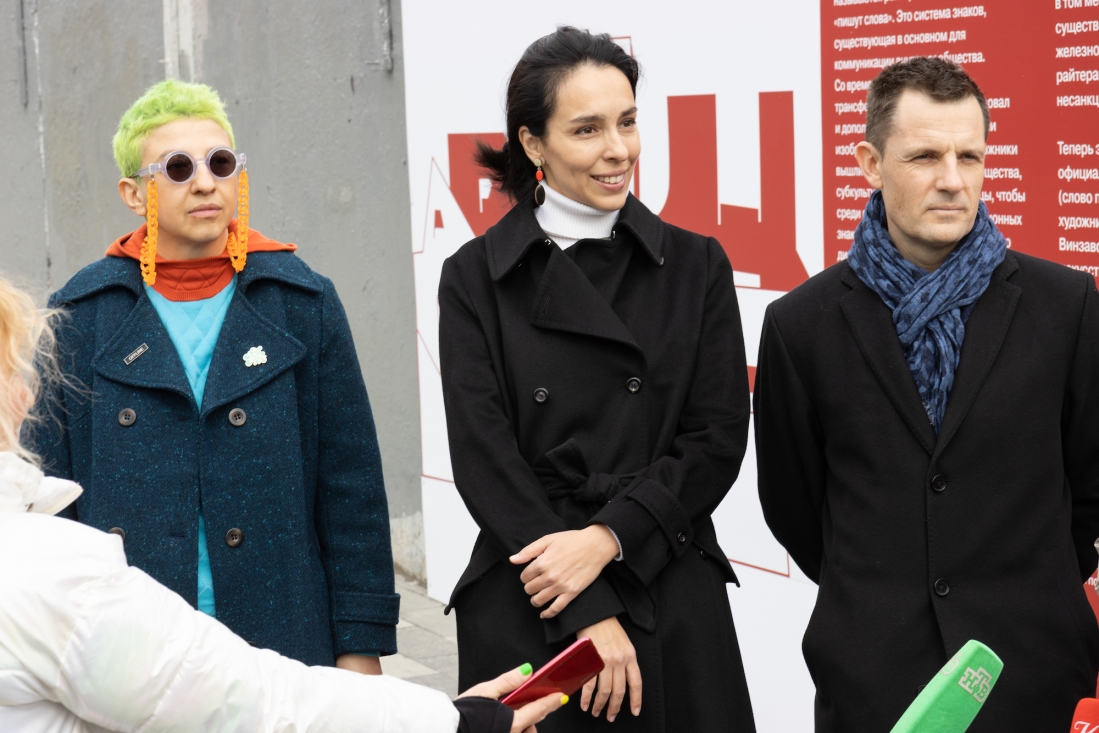 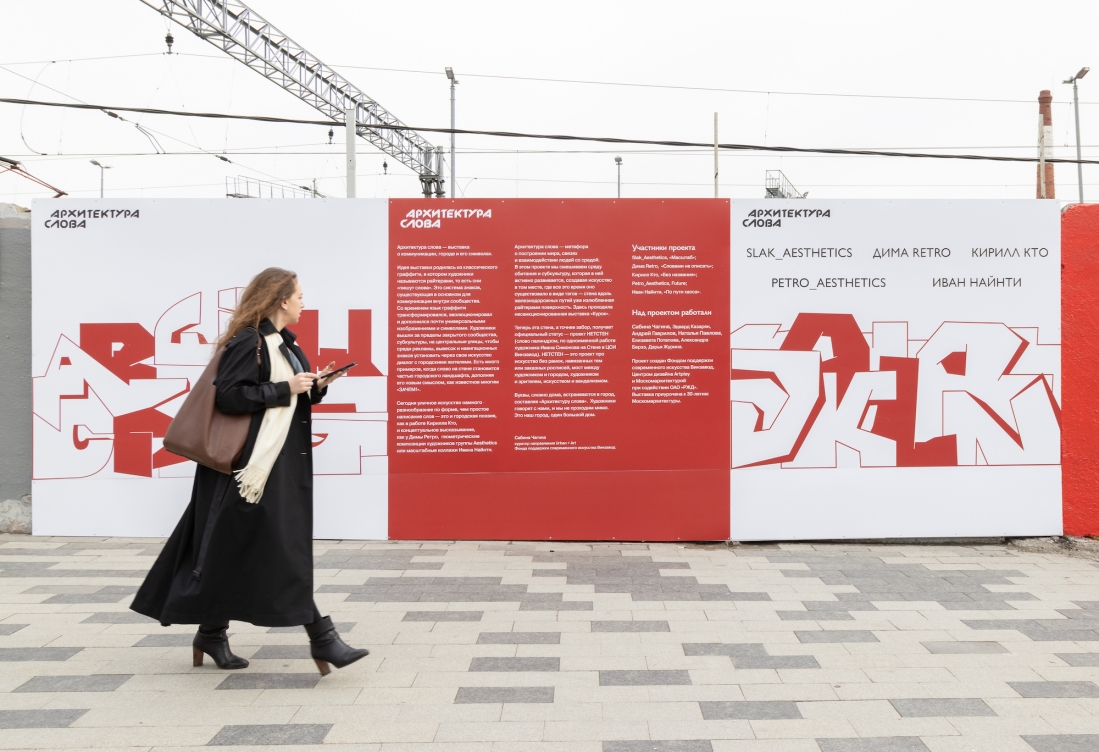 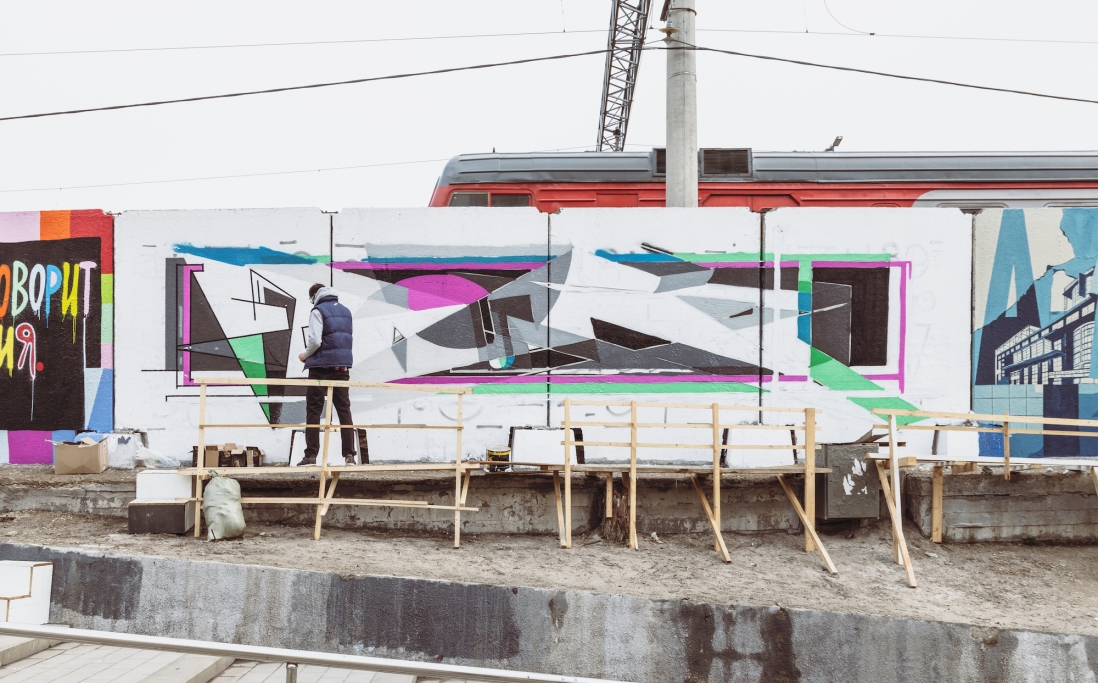 Art Quarter, an urban creative space unique for Moscow, opens with "Architecture of the Word" Exhibition, timed to coincide with the 30th anniversary of Moscow Committee for Architecture. Bright and unusual works of artists are located on the wall along the railroad tracks on the way from Kursky Railway Station towards two creative clusters - Winzavod CCA and Artplay Design Center.

Winzavod Center for Contemporary Art took the initiative to continue the Wall project, which for ten years has been creating a dialogue between street artists and visitors.

The project was supported by Moscow Committee for Architecture, and a technical wall along the railway tracks near Kursky Railway Station was chosen with the permission of the Russian Railways for its implementation. During the competition among graffiti artists, the expert council of the Art Quarter with the participation of representatives of Moscow Committee for Architecture selected the best works both in terms of design and meaning.

“It was important for us to make a street exhibition, because this format is the most open and accessible for the city residents. Last year, to honor the anniversary of Moscow Committee for Architecture, we had many activities aimed at getting to know the city - quests, excursions, educational special projects. And the exhibition has become a logical continuation of this story, when people directly interact with the urban space, see its transformations with their own eyes,” commented Yuliana Knyazhevskaya, Chairperson of Moskomarkhitektura.

“The very name “Architecture of the Word” contains the idea of mobility. The turnover of the exposition also changes the appearance of the entire space around - a dull technical wall has turned into an artistic canvas. I am convinced that beauty saves the world and art provides a huge resource for dialogue. In the period of instability that we are now witnessing, this is especially important. Graffiti has always been a very striking phenomenon in the city, these works contain encouraging and positive moments,” said Sergey Kuznetsov, Chief Architect of Moscow.

Sofia Trotsenko, President of the Winzavod Foundation for the Support of Contemporary Art: “This is not the first time Winzavod has integrated into the urban space outside of our center. Ten years ago, the railway bridge that leads to two iconic creative clusters - Winzavod and Artplay, thanks to the artist Kirill Kto and his team, turned into an art object. Our dialogue with the city through contemporary and street art is both a strategy and a concept.

“Architecture of the Word” is a continuation of the legalization of street art in the Art Quarter area and, in my opinion, the most appropriate format, taking into account the specifics of the area. The continuation of the project, the emergence of permanent platforms for artistic expression in the form of public art, murals and other areas, will be an unprecedented event in the development and support of art by the city.”

Sabina Chagina, Winzavod Urban + Art curator: “NETSTEN * (*NOWALLS )is a palindrome word, based on the work of the same name by artist Ivan Simonov on the Wall at the Winzavod Center for Contemporary Art. In the new urban project of the Urban + Art Winzavod platform, it is important for us to take a step towards the city with the help of art, to create a space for dialogue and a bright dominant that will emphasize the identity of the district and indicate the further intentions of Winzavod and Artplay to create the Art Quarter.”

The creation of the Art Quarter was publicly announced in 2019 by the first creative clusters of the capital - the Winzavod Center for Contemporary Art and the Artplay Design Center, which influence the appearance of the entire Basmanny District. The interaction of creative clusters has formed a modern, highly demanded territory with great potential for interdisciplinary development. In 2019–2020 in the adjacent territory, the Prefecture of the Central Administrative District carried out large-scale landscaping works. The wall provided by Russian Railways became a platform for the start of the project.

The Architecture of the Word Exhibition will run until September 2022.

Ilya Slack, an artist known for his references to avant-garde art, creates a three-dimensional type composition in which he reflects on architectural scale as a category that defines composition.

The theme will be continued by the work by Dima Retro – a visualization of the artist’s observations of the development of Moscow in recent years: the amazing speed of the processes of reconstruction, improvement, construction and urbanization, incomprehensible and difficult for a resident, turns the metropolis into a constantly buzzing beehive.

The work by Kirill Kto was created in the style typical of the author. This time, a statement by Nikolai Gogol was chosen as the text. As always, in a concise form, the artist clearly conveys his idea.

The artist took the word Future as a basis. Through font composition, he reveals his view of the modern architecture of the future, when form and color enter into a dialogue with the environment, while clarity and accuracy set the tone of modernity and bright accents of color solutions dilute the mood with their dynamic sound.

“The Path of Chaos”, Ivan Ninety

"The path of chaos", a work by Ivan Ninety, at first glance, may seem overloaded, as if there is not enough "air" in it. It is this feeling of saturation and oversaturation that occurs in the artist when he finds himself in Moscow. To create the image, the artist used fragments of sketches of Zuev House of Culture, a street scene with Soviet cars, a fragment of the master plan of Moscow in 1935 by Semyonov and Chernyshev, diluting all this with elements from their collages and patterns of glare windows of modern high-rise buildings.