Sergey Kuznetsov: the World Should Perceive Museums as Cultural Institutions 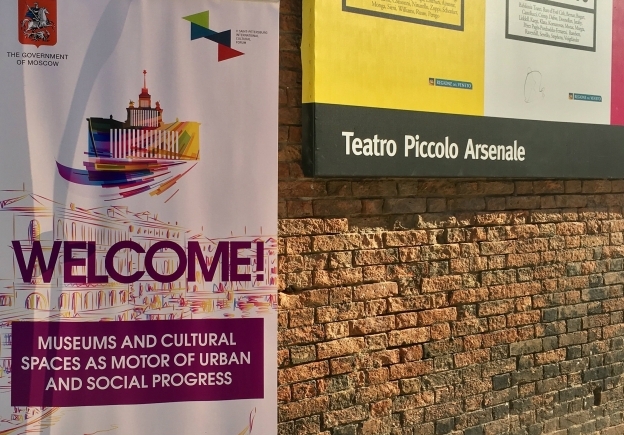 There was a Symposium Museums and Cultural Spaces as a Driver of Urban and Social Development on Saturday 24 in Venice. During the day, leading experts discussed the transformation of the metropolitan cultural origins to address social, intellectual, and aesthetic, and urban issues.

At the 15th International Architecture Biennale in Venice, Russia presented V. D. N. H. URBAN PHENOMENON Project. The theme of V.D.N.H. history was not chosen occasionally, as it is one of the most striking examples of a fierce struggle for quality of life, which won the architectural and cultural origins. According to the Chief Architect Sergey Kuznetsov, Moscow seeks to create strong ties with foreign colleagues in the field of architecture and construction, as well as in the arts. “Foreign experts actively participate in architectural competitions held in Russia and implement such large projects as „Zaryadye„, they build residential and commercial facilities, and, of course, establish many contacts in the art for museums. We look forward to the opportunity of sharing our experience at today’s symposium, I am sure we will be able to define the purposes and objectives of museums and cultural spaces now and in the future,“ said Sergey Kuznetsov.

„To us the question of the development of cultural spaces is a question of daily practice. With the arrival of the Mayor of Moscow Sergey Sobyanin, the city began to invest heavily in the development of cultural, public and social items. Many museums and parks were able to implement a new functional model and an advanced approach to attract a wide audience, such as: Pushkin Museum, Gorky Park, VDNH, and the Tretyakov Gallery. Moreover, large-scale projects for the reconstruction of historical and cultural sites were launched aimed at improvement of streets and creation of new landmarks on the periphery of the city, not only in its center.

Today there are many museums following different models in Moscow. Everyone tries to come up with an interesting idea to attract people. In this regard, VDNH represents an interesting fusion, where it was possible to combine culture, parkland, historic and educational function, entertainment and sports.In this place, something interesting happens every day and people can spend the entire weekend here,“ — said Kuznetsov.

He believes that with the development of the area, first of all, we should pay attention to the implementation of the cultural function, otherwise the space will go stale. And only a person who grew up in a cultural environment can invent something beautiful, knows how to think and approach problems creatively, is able to learn and improve the world. „In Moscow there is a clear understanding of the cultural environment: it changes and flourishes, the new museums are built, old museums are developed, historical buildings are reconstructed, — said Sergey Kuznetsov. Zaryadye Park will be a new space, incomparable with any other museum; only the exhibition space takes about several thousand meters. I think this place will become one of the largest museums in terms of guest traffic and interest.“

Anton Belov, Director of the Center for Contemporary Culture gave a presentation of „Garage“ Museum; he also spoke about architecture in Moscow, about the architects and most high-profile projects in the recent years. According to Lucas Feireiss, urbanist and writer, these examples demonstrate that museums are cultural spaces, today they are perceived by ordinary people and experts as centers of architectural movements. „The whole world should perceive museums as cultural institutions — he says. It is a thing-in-itself, a whole metropolis of architecture, art and emotions, which shows the future, the present and the past of urbanism and changes the social economy.“ „Europe is the ancestor of world culture, and now it is not only the place that creates culture and sets the tone for the architecture, but also the environment where the main consumers of architecture live. That is why it should be a decent product, the one Moscow seeks now. Europe and Moscow, as one of its centers, have become the art market, where museums play the primary role. What should the politicians and urbanists do? What should be of interest to young people? Museums and cultural centers. However, there are global problems: industrial space is economically depressed, and artists are called to address these issues, because they are the main driving force of the world,“ said Liz Dealer, the founding partner of Diller Scofidio + Renfro Architects.

Experts agree that the city does not exist outside the culture, it cannot only live by cafes and shops which are so popular among young residents of the city. Kjetil Thorsen, a Norwegian architect, believes that the functions of such centers should gradually develop in museums, without losing their original value. Martin Roth, ex-Director of London’s Victoria and Albert museum: „Russia revives, and Moscow is the main point of the revival of the whole country. I can speak about it as an expert who has a sufficient number of friends from Russia and I understand the process of renovation. The restructuring of the Russian capital is a ‘silent’ revolution. What do the city authorities do? No, they’re not heralding around about restructuring the public spaces, ‘green’ landscaping of the city, restoring the historical monuments and changing the function of museums — they just do their job. Everything is based on a tiny detail, starts with the little things, but this is exactly what matters to a citizen, that fundamental change of the quality of their life. The products made by Moscow are decent, but few people know about them abroad. Moscow was always full of surprises. As for museums, I’m sure, they have to develop not only their functional qualities but also their content. Because a cultural hub without a serious, unique collection is nothing. The fund is the heart and soul of any Museum. One must keep it in mind starting construction and renovation of old museums. An example of successful construction of new museums isChina where every square meter counts; since 1990s, dozens of cultural centers were built.This is the best course in the context of urban development“.

Sergey Kuznetsov also reminded the guests that a Cultural Forum will be held in St. Petersburg on December 1-3,2016. The first section of the Forum will be dedicated to such issues as urbanism and urban planning.