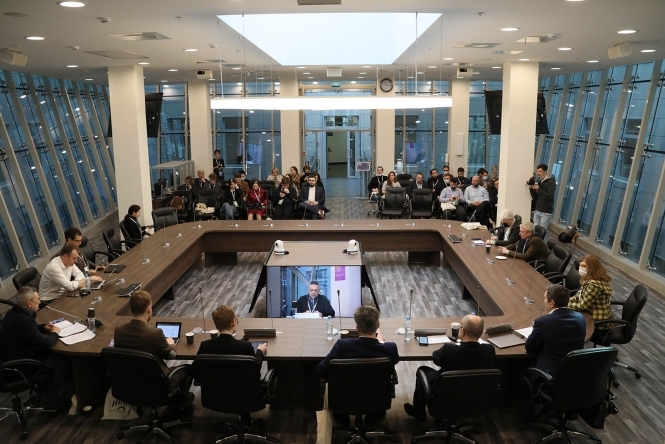 A map of trends and opportunities for the capital will be presented at the annual ARCH Moscow Exhibition in Gostiny Dvor on June 3. It has been the result of a large-scale foresight project ‘Moscow-2050’ organized by the Institute of the General Plan of Moscow with the support of Moscow Committee for Architecture and Construction.

The future is constantly changing, and to determine its scenarios, we often resort to the so-called foresight — a tool for forecasting and shaping the future, which makes it possible to obtain accurate forecasts in a short period of time and unite people to realize their ideas about it. Yuliana Knyazhevskaya, Chair of the Committee for Architecture of Moscow, became the curator of ‘Moscow-2050’ foresight program, while Chief Architect of Moscow Sergey Kuznetsov is the curator of the architectural and urban planning section.

«Transformations of megacities throughout history have always been associated with the development of urban planning and architectural planning. Even today we must formulate the image and the values of Moscow that we want to see several decades later; the future of the city depends on this. Even if now the trends indicated on the foresight look like fantasy and something impossible, in the future they can help to solve a number of problems of the city and its residents» - said Yuliana Knyazhevskaya, Chair of Moscow Committee for Architecture.

The project has engaged about 200 experts from the field of architecture, urban planning, sociology, economics, cultural studies, marketing and others. Among them one can see President of the Moscow School of Management Skolkovo Andrey Sharonov, Director of the Moscow Center for Urban Studies Sergey Kapkov, Vice President of the Skolkovo Foundation, partner of KB Strelka Alexey Muratov, Vice Rector of the Presidential Academy of RANEPA and Director of the Higher School of Public Administration at RANEPA Alexei Komissarov, political scientist and publicist, associate professor of the Department of Public Administration and Public Policy of the Institute of Social Sciences of the RANEPA under the President of the Russian Federation Ekaterina Shulman, Deputy Director General of the DOM.RF Foundation Anton Finogenov and others.

Within the project, five expert sessions were held, a competition for student papers was organized by the HSE and the Financial University, five in-depth expert interviews and a survey among 130 experts were conducted.

«A megacity needs fresh creative ideas, and vectors for its transformation are needed. Foresight helps to link differently directed opinions and proposals, and then, on their basis, to form already well-defined development scenarios. As a result of large-scale joint work within the framework of the ‘Moscow-2050’ project, more than 500 trends in Moscow’s development were formulated, many of which look interesting and promising. But first of all, we must remember that the future is variable and directly depends on collective efforts, so the implementation of these forecasts depends directly on the city’s residents» — said Chief Architect of the city Sergey Kuznetsov at the final session.

«Foresight is one of the most interesting forms of collective imagination, arranged according to the principle of applied analytical thinking. Do you keep wondering how this happens? How does chaos turn into order and order into beauty? And when we talk about cities, collective fantasy has always played a special role in the history of urban development. It was it that made Moscow and New York what they are" — says Viktor Vakhstein, Dean of the Faculty of Social Sciences of Moscow Higher School of Social and Economic Sciences.

The futuristic future of the capital in 30 years looks dynamic and high-tech. According to experts, in 30 years, Muscovites will go to work at Zoom, study much more, go out less often, organize themselves more successfully, and will trust most household solutions to artificial intelligence. And new services, virtual assistants, nanoscale doctors, keyless locks and self-driving cars will become part of the life of the townspeople.