Preview of the Architecture Biennale 2016: Russia 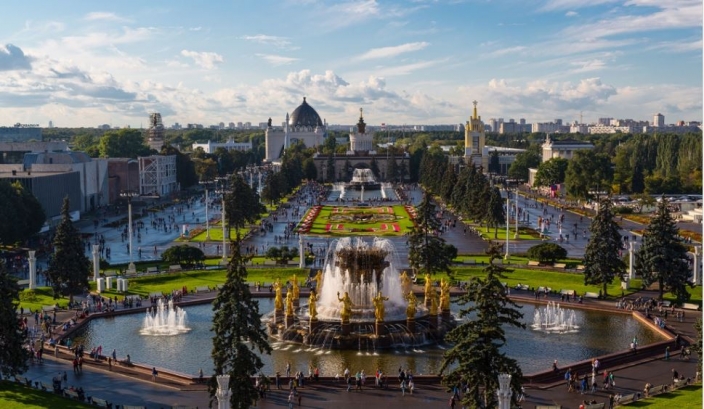 The Russian pavilion will mainly focus on the revival of the VDNH «The Exhibition of National Economic Achievement» in Moscow. It is an interesting example that shows how the Russian territory with its rich history, architecture and different cultural layers has gone through a period of desolation and active transformation and how culture has become the main instrument of its revival.

The architecture and nature complex of 500 ha in Moscow was created in 1939 to represent the Soviet Era and to show samples of the architectural views in different times. There are more than 500 permanent structures, of which 49 are classified as cultural heritage. It was abandoned in the post-Soviet times, but has now been revived as a social project by the government of Moscow. Since 2013, this large architectural center has been turned into a multifunctional cultural and educational space, aimed primarily at the residents of the large metropolis.

The pavilion will recreate the atmosphere of the unusual architectural center of the VDNH using art and multimedia technology. A video will show the exhibition in different seasons and different times of day, with panoramic views from the most striking and unusual features of some of the structures. A music suite «12 months of VDNH» has been composed for this video. They will also show sketches of the fountain statues «Peoples Friendship» and the famous Yevgeny Vuchetich’s high relief, which was found in 2014 during the restoration of the central pavilion of the exhibition.

In the framework of the Biennale, a large educational project accessible for university students from many cities of the world will also be implemented in the pavilion of Russia.

Sergey Kuznetsov, Curator: «The present theme reporting from the front has become an interesting challenge for the pavilion commissary Semen Mikhaylovskiy, the co-curator Ekaterina Pronicheva and myself. We gave much thought to its meaning and I must say the in-depth reading of the curator’s manifest and the conversation with Alejandro Aravena were very useful. Briefly, our understanding is that the frontline of today is where people expand their environment, that is, between the known territory and the unknown.

On the example of VDNH — a unique architecture and nature complex — we would like to demonstrate the effectively working mechanisms of a successful cultural assimilation. We indirectly cooperate with other participating countries, for instance, involving european consultants to creation of our exposition. In particular, I would like to express our enormous gratitude in the work on the project to Kristin Feireiss, the architectural critic and expert, the founder of the independent forum Aedes in Berlin».