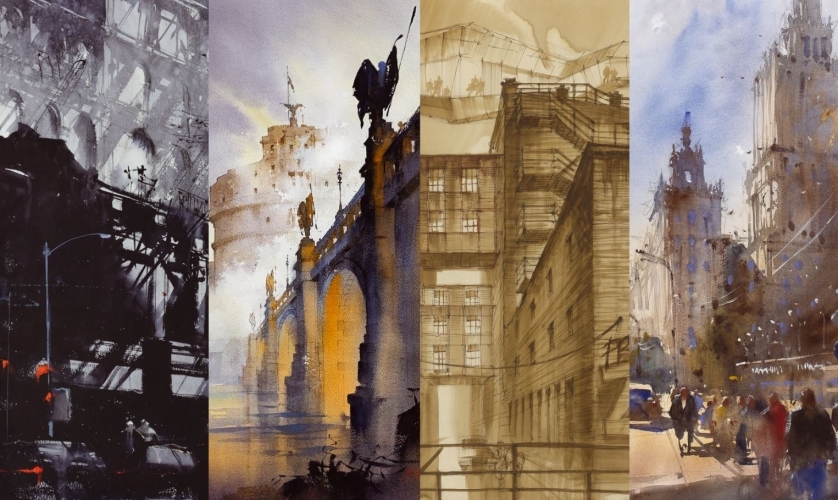 In a few minutes, you will move from the quiet Tiber embankment to the rapidly flying Kutuzovsky Prospekt, recharge with the energy of today’s Manhattan and see Uferstrasse of the future ... An unusual exhibition of paintings and graphics in Zaryadye Park Media Center offers you to look at the popular centers of the world with the eyes of four artists who are fascinated by the image of cities.

The project displays works by recognized masters of urban landscape and architectural drawing — watercolors by Alvaro Castagnet from Uruguay and Thomas Schaller from the USA, Chief Architect of Moscow Sergey Kuznetsov, architect and graphic artist Sergei Tchoban, who works in Russia and Germany. All of them are keen not to only make reliable reproduction of reality, but also share their feelings and impressions of the urban environment with the audience. Developing old traditions and techniques, they at the same time find new artistic techniques for author’s statements about the spirit of place and time.

The exhibition will be located on two levels of the Media Center — in the media hall and exhibition hall. The first part of the exposition presents the works of participants in digital animation, made by one of the leading Russian companies for creating exhibition multimedia content — Digital Art Center ARTPLAY Media. For this section, each artist has chosen a city that he knows and loves well: Sergey Kuznetsov — Moscow, Sergey Tchoban — Berlin, Thomas Schaller — Rome, Alvaro Castagnet — New York. A video that dissolves the boundaries between reality and image will immerse viewers in the space of paintings and drawings, allowing them to experience the atmosphere of four attractive cities.

In the exhibition hall you can see the originals of the works engaged in the animation, as well as other works created by the authors during their trips to different countries. Being literally embodied in a multi-channel video, the name of the exhibition is manifested multifacetedly in four personal expositions designed by Planet 9 architectural bureau.

Sergei Tchoban’s delicate and accurate graphics reflects the idea of the motion of cities in time — through the renewal of urban fabric, the germination of the new through the old. The effect of dynamics is the basis of Alvaro Castagnet’s artistic compositions, created on a balance of clear and blurry outlines; it also is an essential element of Sergey Kuznetsov’s watercolors, which with a light brush convey the architecture, the flows of people and cars in the vibrations of the air. The feeling of motion, in particular, owing to the skillful black-and-white «directing», penetrates through all the landscapes by Thomas Schaller.

The exhibition «Cities in Motion» is a synthesis of man-made and digital art; it invites you to take a virtual walk through the most beautiful cities of the world and to appreciate from new angles the charm and diversity of the exhibition starting point — Moscow.

Being one of the most respected watercolor artists in the world, he was born and raised in Montevideo (Uruguay). He studied there at the National School of Arts, then at the University in the class of the famous artist Miguel Angel Pareja. In 1983 he moved to Australia, where he lived for 20 years. Then he returned to his home country. His recognition is confirmed by many international awards, including such recognized organizations as the American Watercolor Society, the Watercolor National Society (USA) and the Shanghai Zhujiajiao International Watercolor Biennial Award. His works brighten private and corporate collections around the world. His seminars and master classes are in great demand. The main topics of his creativity are cities, architecture, street life, the interiors of restaurants and cafes, where people relax, socialize and dance tango. Alvaro Castagnet works in a strong, emotional manner, often doing with a laconic palette corresponding to his perception of the image of the place. «Painting is my way of being an active participant in life. In the urban noise and bustle, in the thick of things I am like a fish in the water. I try to depict not only architectural forms that seduce the eye with their splendor, but also sounds, and even smells. The most important thing for me, no matter how trivial it may sound, is the mood and atmosphere» — says the artist.

Chief Architect of Moscow (since 2012) and First Deputy Chairman of the Committee on Architecture and Urban Planning of Moscow. Professor Emeritus of the Moscow Architectural Institute, member of the Union of Architects of Russia, Union of Moscow Architects. The author and creative director of significant architectural projects in Russia and abroad. Together with architectural activity, he conducts active artistic practice. He is a member and multiple winner of the Architecture in Perspective competition of the American Society of Architectural Illustrators (ASAI), participated in the creation of the Museum of Architectural Graphics in Berlin, and is a member of the jury of the ArchiGraphics Russian International Competition for Architectural Drawing. Works by Sergey Kuznetsov were shown at his personal exhibition at MAMM (Multimedia Art Museum, Moscow), at exhibitions at the National Institute of Graphics in Rome, the State Tretyakov Gallery. Sergey Kuznetsov believes that the watercolor technique is best suited to his energetic perception of the world. When his busy schedule and the weather allow, he goes to the city with a sketchbook. He creates his works easily and quickly, not striving for a meticulous study of details. It is more important for him to grasp the essence of architectural forms and urban spaces. Painting helps to better understand the city for the sake of which he works. «The difference between Moscow and other centers of the world in terms of painting is diversity. Here, both close-ups and multifaceted prospects are interesting. Today I want to draw Empire or Art Deco — here you are. Tomorrow it will be brutal industrial and skyscrapers — we have them, too».

An architect, head of SPEECH bureau (Moscow) and Tchoban Voss Architekten (Berlin). The creator of more than 40 buildings in various cities of Russia, Germany, Italy. Member of the Union of Architects of Russia and the Union of Artists of Russia, the Union of German Architects (BDA), Honorary Academician of the Russian Academy of Arts. Founder of the Tchoban Foundation, a charity foundation for architectural drawing, dedicated to support and promotion of art of architectural graphics. Sergey Tchoban’s works have been repeatedly awarded at international architectural drawing competitions and exhibited in museums in Moscow and St. Petersburg, as well as in galleries and museums in Italy, England, the USA, Japan, Germany, China and other countries. In 2019-2020, Sergei Tchoban was elected President of the American Society of Architectural Illustrators (ASAI). Working in various graphic techniques, Sergey Tchoban is convinced that «today drawing and painting on paper can still be a significant work of art if the author has found and is trying to express something that is not so obvious to others».

For 20 years, Thomas Schaller has been involved in architectural practice in New York. He developed urban planning concepts and performed visualization of projects. Then he moved to Los Angeles, where he devoted himself entirely to watercolor painting and became one of the most famous architectural landscape painters in the world. The long list of his awards includes the largest award in the field of architectural drawing — the Hugh Ferriss Memorial Prize. Thomas Schaller is Honorary President of the American Society of Architectural Illustrators (ASAI) and a member of other international art associations. His books «Architecture in Watercolor», «The Art of Architectural Drawing» and «Architect of Light: Watercolor Paintings by a Master» are best-sellers today. It is extremely difficult to catch the artist — he is constantly moving around the world, giving lessons, master classes and reading lectures. In painting, he is most inspired by the dramaturgy of light and shadow, and, having tried various tools and materials, he did not find a better means for their embodiment than watercolor. When painting cities, Thomas Schaller always remembers that they are nothing without people and their movement, filling architectural scenery with life.