Markus Appenzeller: There are many examples of comfortable high-density urban environment in the world 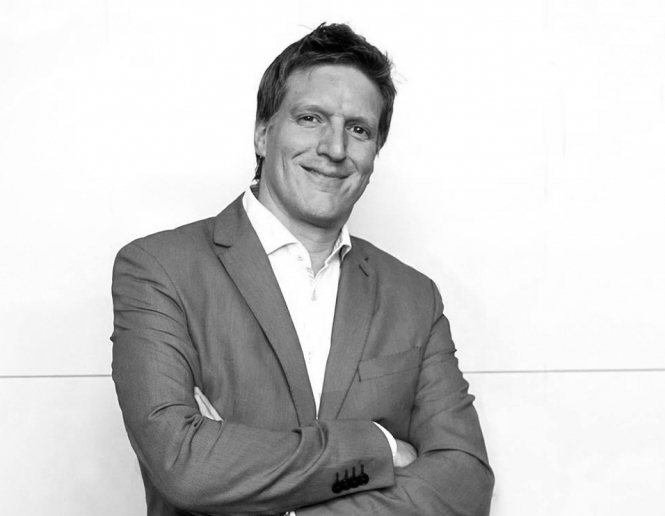 Markus Appenzeller, a Dutch architect and urban planner, lecturer at the Berlage Institute in Rotterdam and partner at MLA+, which is actively designing projects in Russia, commented on the announcement of the international competition for renovation concepts for five pilot sites in Moscow.

—The Architectural and Urban Planning Competition for pilot sites of housing stock renovation in Moscow has been launched. What is the objective of the competition, from your point of view?

—Today this competition is of great importance in the context of the Moscow Renovation Program, because we have so far been talking about some theoretical models, but we do not have any visualization of how it should look. We hope that the selected concepts will propose approaches and principles, rather than a universal model for implementation. For example, switching to quarter development approach is not perfect solution for all cases. This is a really effective model, but it is not the only one. I believe that in the process of the competition we will receive creative examples that can be discussed specifically afterwards. The important thing is that the model should be developed according to Moscow conditions, taking into account the city’s historical, natural, and economic context.

—What do you think: what is the comfortable limit of density in a block?

—I think there is not like just one figure where you can say «this is comfortable» or «this is uncomfortable». If you look around the world, there are great places which are extremely dense, as well as there are great places which are very undense. And I think this is unreasonable to apply one density all across the board — it is much more effective to use the individual approach when choosing density for each specific project. You really have to think and look at different situations and different conditions, locate places while making decisions what is the proper density, how to allocate density on the bigger sites. 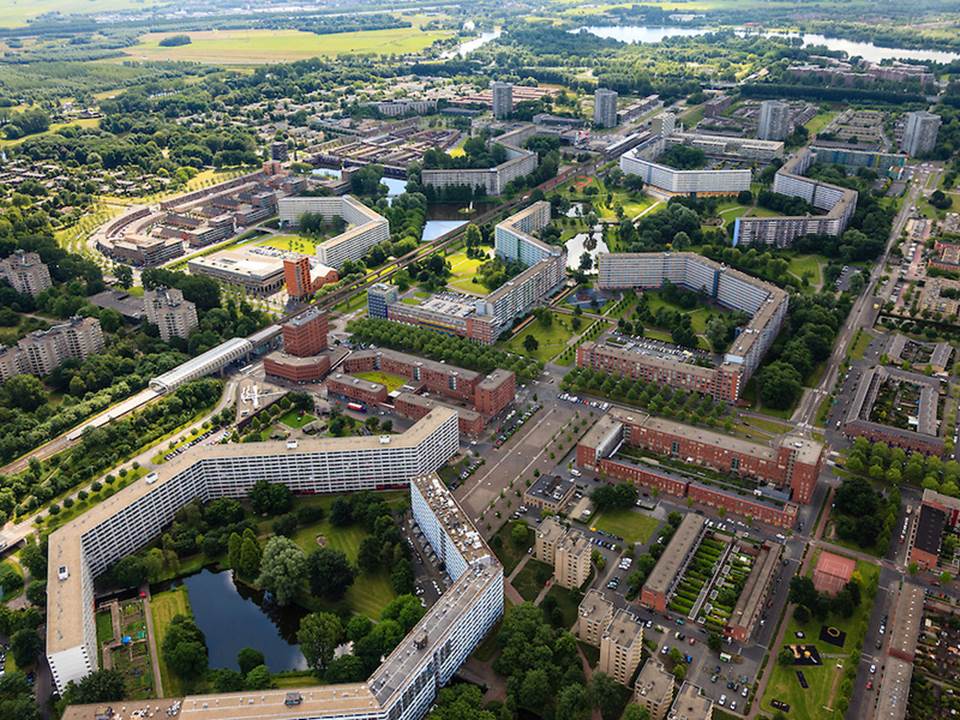 Renovation of the Bijlmermeer in Amsterdam

Whether we have the same density over the whole site or we concentrate density in a certain spot, which, given the public transport issue, might be a good option.

I think Moscow will have to accept a significant uprating density. But again, there should be a discussion whether to build perimeter blocks across the city or just engage in high-raised development that actually will release the pressure from other areas and could have more or less the same density levels which the neighborhoods have now, or slightly higher. So you can just add two or three floors to it, which could create a completely different environment, also a very diverse environment. Because not everybody likes to live in khrushchyovkas. There are people that probably would prefer to have one-bedroom apartment near a metro-station. Apart from discussing architecture and spatial development, a very careful investigation has to be carried out to determine the products which the market actually needs now and that will last in future.

—Has the renovation problem ever been raised in Amsterdam?

—Of course! Though, in general, in Amsterdam context there isn’t a lot of densification in terms of total numbers; it’s slightly more than before, but it’s not substantially more. And I think that balance still has to be found on how this is done. In the case of Amsterdam it was only possible because the public sector, the city and actually the whole country realized that if we don’t upgrade these neighborhoods, the problems only get bigger. So a lot of public money went to this.

—The renovation in Moscow will also be financed from the city budget, at least at the first stage. What do you think about it?

—Considering the cases I know, it’s always a joint financing of private businesses and the state, because business is interested in the construction of the buildings, while the state is concerned about how to build infrastructure and provide all necessary public services. From my point of view, the Renovation Program needs a fair involvement of the city to get this to work. Also, there should be a careful investigation to estimate the actual value of the apartments. All possible variants should be considered; for example, with every square meter you lose, you get the exact amount of money, but it should also be taken into account that within Moscow you have places which are more desirable and better connected, and places which are less desirable — that should also be reflected in the amount of compensation that people get. And I don’t think it would work without the involvement of the city and the commitment of the city. 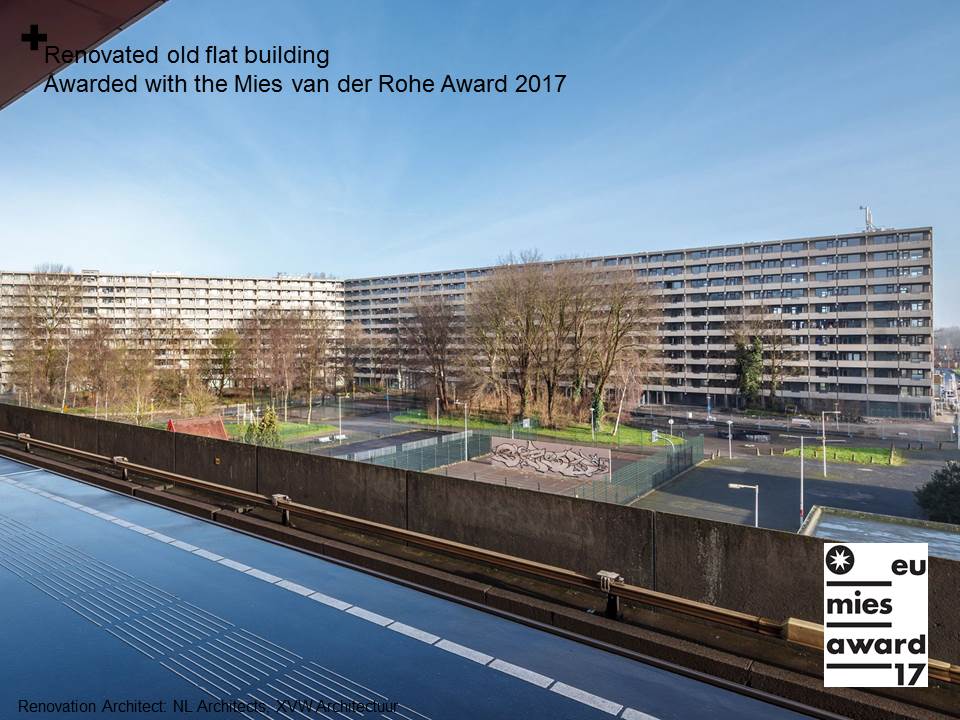 Renovation of the Bijlmermeer in Amsterdam

—In what way the experience of reconstruction of modernist quarters, such as Bijlmer in Amsterdam, can be useful for Moscow?

—You know the story of the Bijlmermeer, I think, the important factor that contributed a lot to the degradation of the area was a large number of unclaimed «common» spaces, which is not characteristic of Amsterdam. During the reconstruction it was greatly decreased and transferred to private ownership. The neighborhood had solely residential development which subsequently was replaced by the combination of different building types and functions. The «endless» green space had to be reorganized somehow. In the end, it was transformed into well-defined public parks and streets. In addition, the system of roads was reconstructed — you know, for that time it was a very progressive way to separate landscape and traffic flow. During the reconstruction, the elevated infrastructure was relocated to the ground level, while landscape and transport were integrated into a single system.

An important factor is that all this redevelopment was started only after it had been discussed with all the participants of this process. In fact, a certain percentage of people, if you ask them, will answer that they like living there, and that’s a very good place. But today we abandon centralized planning and prefer involving a wide range of participants; and I believe this approach is the most appropriate for the existing conditions; moreover, it has a positive impact on the market and meets the needs of new residents.

The great number of the Bijlmermeer’s unclaimed public spaces have been transformed into a more detached and semi-private spaces.

—How to avoid destruction of neighboring communities and the growth of social tension?

—The processes and discussions like in Moscow, in fact, happen all over the world. It is obvious that these buildings are going to fall into disrepair soon, and today we need to find the ideology and implementation mechanisms, based, in particular, on how to preserve the values that exist in the areas.

For example, in China we recently did a large-scale project. And there we proposed not to do all site demolition and replacement, but actually step by step. So you take two buildings and replace them, and then, at the other end of the neighborhood, you take down two other buildings and replace them. By doing that you actually keep most of the neighborhood stay intact, and also people still living there; some people temporarily move to other places, but they come back. So by the time you start redeveloping another part, the people that had been moved come back; there is new residence and the community keeps thriving.

It’s not like «tentacles of graver conditions» when you remove all life and start from scratch.

Because we all know it typically takes, in a good case, 10 years, I think more like 20 years, for the community to immerge to live there. And I think there are ways which mean much smaller scale of operation, and we shouldn’t demolish everything at once to develop areas from the ground up. I believe there can be something more sensible which ultimately keeps people a lot more happy, because they become a part of this transformation, rather than being sent away and coming back to find the new thing there.